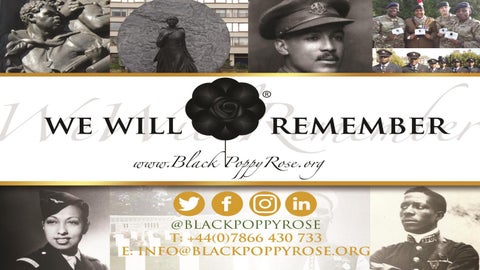 From £2.50 each BlackPoppyRose Commemorative pin

Why Do We Need A BlackPoppyRose? African/Black people have consistently contributed to civilisation. Growing up in the UK, most people are aware of the red Poppy, which signifies British remembrance, as celebrated by The Royal British Legion. BlackPoppyRose fully supports the legacy of the red Poppy, however, felt that as African/Black Britons exploring our historical journeys, it was important to highlight our ancestral contribution to world history.

The project began five years ago, following the realisation that in a country that many African/Black people call home, the history that represents us has been displaced over the course of time. England has an excellent archive of the countryâ&amp;#x20AC;&amp;#x2122;s historic achievements. These are documented and celebrated via monuments, statues and plaques, documentaries, books, articles and magazines, etc. However, there is a severe lack of representation displaying the full picture of history, including all of its contributors.

Why we have a BlackPoppyRoseâ&amp;#x20AC;Ś The blood that runs through us today carries the experiences and tales from many many many years ago. If it didnâ&amp;#x20AC;&amp;#x2122;t then we would not be here today. Our history is very important and significant for each of our developments. To identify with ourselves is the most powerful tool, history teaches us this regularly. We will remember our historical genealogy and the contributions we continue to make with a symbol that includes our memories for over 400years.

Our Aims To make the BlackPoppyRose our symbol of Remembrance worldwide. To understand that throughout our history we have been displaced over many generations. Our memories, pain and loss are universal. For our children must know their history to be able to make their marks on the future.

• We would like to collect War stories from all over the world to enable us to have an overview of ‘How’ the war was far us: Collecting pictures/clothing/memorabililia to preserve and document our presence. • We would like to document the graves of those who have fallen. (laying BlackPoppyRose wreaths) • We would like to work with others who are promoting and highlighting the African/Black Contribution to Wars. • To establish a Remembrance day for us to remember our ancestors contributions.

Why we have the BlackPoppyRose? The BlackPoppyRose is a symbol for us to remember not only the soldiers, but also the families/people, of Africans (Black People) who contributed to and were affected by the War effort. • • • • • •

We served in/from: • Africa • Asia • Europe • North America (West Indies) • South America • Oceania 100 years ago our ancestors have enabled us to be here today and this warrants our remembrance, honour &amp; respect.

Our History must not be forgotten, nor must our contributions be undervalued.

‘A people without knowledge of their past history, origin and culture is like a tree without roots’ ‘The Honourable Marcus Mosiah Garvey’

Do you know your Family Tree? Great Great Granddad

Where were your families during these wars??? Do you Know??? Would you share your stories with us??? Contact us: info@blackpoppyrose.org Do you need help researching your Family Tree??? Contact us. Selena.carty82@gmail.com

The Flags of the British Empire

Haitian Revolution 21st April 1791 – 1st January 1804 The Haitian Revolution, was much more complex, consisting of several revolutions going on simultaneously. These revolutions were influenced by the French Revolution of 1789, which would come to represent a new concept of human rights, universal citizenship, and participation in government. Leaders • Toussaint L’Overture • Jean Jacque Dessalines • Henry Christophe

At the Battle of Trafalgar, HMS Victory had a crew of 820 men commanded by Captain Thomas Masterman Hardy. The crew were comprised of 9 Commissioned Officers, 21 Shipmen and 77 Non-commissioned Warrant and Petty Officers, the rest being Able and Ordinary Seaman, Landsmen, supernumeries and 31 boys. Also within this complement was a detachment of 146 Royal Marines from the Chatham Division, commanded by Captain Charles Adair. A few days before the battle the Victory muster book listed 441 English, 64 Scots, 63 Irish, 18 Welsh, 3 Shetlanders, 2 Channel Islanders, and 1 Manxman. There were also 71 foreigners aboard comprising 22 Americans, 7 Dutch, 6 Swedes, 4 Italians, 4 Maltese, 3 Frenchmen volunteers, 3 Norwegians, 3 Germans, 2 Swiss, 2 Portuguese, 2 Danes, 2 Indians, 1 Russian, 1 from Africa and 9 from the West Indies.

Mary Jane Seacole 1854 Mary Seacole travelled to England and approached the war office, asking to be sent as an army nurse to the Crimean War. She was refused. Mary Seacole went on to fund her own trip to the Crimean. (Read her book the Wonderful Travel of Mary Seacole in Many Lands, she taught Florence Nightingale how to treat Cholera but Florence wouldn&#39;t hire her.)

Tour 2016 â&amp;#x20AC;¢ We have 14, 6ft panels what are currently touring in libraries/schools. If you would like us to bring the free* exhibition to you please contact us. *(Only Travel costs for drop off &amp; pick ups required) 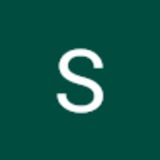