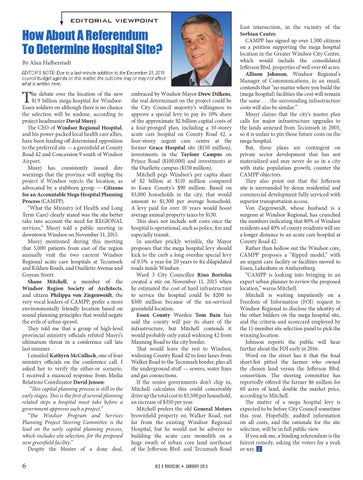 How About A Referendum To Determine Hospital Site? By Alan Halberstadt EDITOR'S NOTE: Due to a last-minute addition to the December 21, 2015 council budget agenda on this matter, the outcome may or may not affect what is written here.

he debate over the location of the new $1.9 billion mega-hospital for WindsorEssex soldiers on although there is no chance the selection will be undone, according to project headmaster David Musyj. The CEO of Windsor Regional Hospital, and his power-packed local health care allies, have been fending off determined opposition to the preferred site — a greenfield at County Road 42 and Concession 9 south of Windsor Airport. Musyj has consistently issued dire warnings that the province will unplug the project if Windsor rejects the location, as advocated by a stubborn group — Citizens for an Accountable Mega Hospital Planning Process (CAMPP). “What the Ministry (of Health and Long Term Care) clearly stated was the site better take into account the need for REGIONAL services,” Musyj told a public meeting in downtown Windsor on November 11, 2015. Musyj mentioned during this meeting that 5,000 patients from east of the region annually visit the two current Windsor Regional acute care hospitals at Tecumseh and Kildare Roads, and Ouellette Avenue and Goyeau Street. Shane Mitchell, a member of the Windsor Region Society of Architects, and citizen Philippa von Ziegenweidt, the very vocal leaders of CAMPP, prefer a more environmentally friendly location based on sound planning principles that would negate the evils of urban sprawl. They told me that a group of high-level provincial ministry officials refuted Musyj’s ultimatum threat in a conference call late last summer. I emailed Kathyrn McCulloch, one of four ministry officials on the conference call. I asked her to verify the either-or scenario. I received a nuanced response from Media Relations Coordinator David Jensen: “This capital planning process is still in the early stages. This is the first of several planning related steps a hospital must take before a government approves such a project.” “The Windsor Program and Services Planning Project Steering Committee is the lead on the early capital planning process, which includes site selection, for the proposed new greenfield facility.” Despite the bluster of a done deal,

embraced by Windsor Mayor Drew Dilkens, the real determinant on the project could be the City Council majority’s willingness to approve a special levy to pay its 10% share of the approximate $2 billion capital costs of a four-pronged plan, including a 10-storey acute care hospital on County Road 42, a four-storey urgent care centre at the former Grace Hospital site ($150 million), investments in the Tayfour Campus on Prince Road ($100,000) and investments at the Ouellette campus ($150 million). Mitchell pegs Windsor’s per capita share of $2 billion at $110 million compared to Essex County’s $90 million. Based on 83,000 households in the city, that would amount to $1,300 per average household. A levy paid for over 10 years would boost average annual property taxes by $130. This does not include soft costs once the hospital is operational, such as police, fire and especially transit. In another prickly wrinkle, the Mayor proposes that the mega hospital levy should kick to the curb a long overdue special levy of 0.5% a year for 20 years to fix dilapidated roads inside Windsor. Ward 3 City Councillor Rino Bortolin created a stir on November 11, 2015 when he estimated the cost of hard infrastructure to service the hospital could be $200 to $300 million because of the un-serviced greenfield location. Essex County Warden Tom Bain has said the county will pay its share of the infrastructure, but Mitchell contends it would probably only entail widening 42 from Manning Road to the city border. That would leave the rest to Windsor, widening County Road 42 to four lanes from Walker Road to the Tecumseh border, plus all the underground stuff — sewers, water lines and gas connections. If the senior governments don’t chip in, Mitchell calculates this could conceivably drive up the total cost to $3,500 per household, an increase of $350 per year. Mitchell prefers the old General Motors brownfield property on Walker Road, not far from the existing Windsor Regional Hospital, but he would not be adverse to building the acute care monolith on a huge swath of urban core land northeast of the Jefferson Blvd. and Tecumseh Road B IZ X M A G A Z IN E • J A N U A R Y 2 0 1 6

East intersection, in the vicinity of the Serbian Centre. CAMPP has signed up over 1,500 citizens on a petition supporting the mega hospital location in the Greater Windsor City Centre, which would include the consolidated Jefferson Blvd. properties of well over 60 acres. Allison Johnson, Windsor Regional’s Manager of Communications, in an email, contends that “no matter where you build the (mega-hospital) facilities the cost will remain the same . . . the surrounding infrastructure costs will also be similar.” Musyj claims that the city’s master plan calls for major infrastructure upgrades to the lands annexed from Tecumseh in 2003, so it is unfair to pin those future costs on the mega hospital. But, those plans are contingent on private sector development that has not materialized and may never do so in a city with static population growth, counter the CAMPP objectors. They also point out that the Jefferson site is surrounded by dense residential and commercial development fully serviced with superior transportation access. Von Ziegenweidt, whose husband is a surgeon at Windsor Regional, has crunched the numbers indicating that 80% of Windsor residents and 40% of county residents will see a longer distance to an acute care hospital at County Road 42. Rather than hollow out the Windsor core, CAMPP proposes a “flipped model,” with an urgent care facility or facilities moved to Essex, Lakeshore or Amherstburg. “CAMPP is looking into bringing in an expert urban planner to review the proposed location,” warns Mitchell. Mitchell is waiting impatiently on a Freedom of Information (FOI) request to Windsor Regional to disclose the identity of the other bidders on the mega hospital site, and the criteria and scorecard employed by the 11-member site selection panel to pick the winning location. Johnson reports the public will hear further about the FOI early in 2016. Word on the street has it that the final short-list pitted the farmer who owned the chosen land versus the Jefferson Blvd. consortium. The steering committee has reportedly offered the farmer $6 million for 60 acres of land, double the market price, according to Mitchell. The matter of a mega hospital levy is expected to be before City Council sometime this year. Hopefully, audited information on all costs, and the rationale for the site selection, will be in full public view. If you ask me, a binding referendum is the fairest remedy, asking the voters for a yeah or nay.