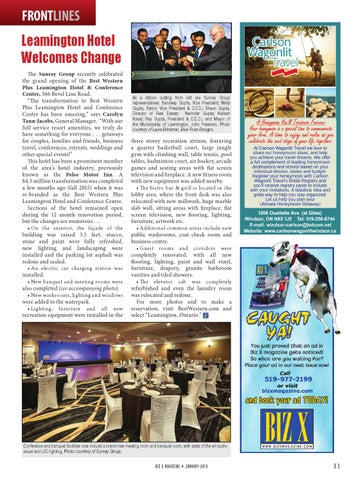 FRONTLINES Leamington Hotel Welcomes Change The Sunray Group recently celebrated the grand opening of the Best Western Plus Leamington Hotel & Conference Centre, 566 Bevel Line Road. “The transformation to Best Western Plus Leamington Hotel and Conference Centre has been amazing,” says Carolyn Tann-Jacobs, General Manager. “With our full service resort amenities, we truly do have something for everyone . . . getaways for couples, families and friends, business travel, conferences, retreats, weddings and other special events!” This hotel has been a prominent member of the area’s hotel industry, previously known as the Pelee Motor Inn. A $4.5 million transformation was completed a few months ago (fall 2015) when it was re-branded as the Best Western Plus Leamington Hotel and Conference Centre. Sections of the hotel remained open during the 12 month renovation period, but the changes are numerous . . . • On the exterior, the façade of the building was raised 3.5 feet, stucco, stone and paint were fully refreshed, new lighting and landscaping were installed and the parking lot asphalt was redone and sealed. • An electric car charging station was installed. • New banquet and meeting rooms were also completed (see accompanying photo). • New washrooms, lighting and windows were added to the waterpark. • Lighting, furniture and all new recreation equipment were installed in the

Conference and banquet facilities now include a brand new meeting room and banquet room, with state of the art audiovisual and LED lighting. Photo courtesy of Sunray Group.