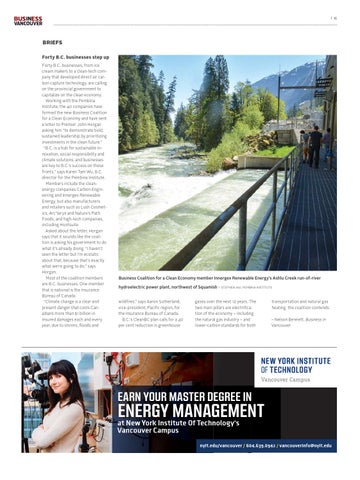 BRIEFS Forty B.C. businesses step up Forty B.C. businesses, from ice cream makers to a clean-tech company that developed direct air carbon capture technology, are calling on the provincial government to capitalize on the clean economy. Working with the Pembina Institute, the 40 companies have formed the new Business Coalition for a Clean Economy and have sent a letter to Premier John Horgan asking him “to demonstrate bold, sustained leadership by prioritizing investments in the clean future.” “B.C. is a hub for sustainable innovation, social responsibility and climate solutions, and businesses are key to B.C.’s success on these fronts,” says Karen Tam Wu, B.C. director for the Pembina Institute. Members include the cleanenergy companies Carbon Engineering and Innergex Renewable Energy, but also manufacturers and retailers such as Lush Cosmetics, Arc’teryx and Nature’s Path Foods, and high-tech companies, including Hootsuite. Asked about the letter, Horgan says that it sounds like the coalition is asking his government to do what it’s already doing. “I haven’t seen the letter but I’m ecstatic about that, because that’s exactly what we’re going to do,” says Horgan. Most of the coalition members are B.C. businesses. One member that is national is the Insurance Bureau of Canada. “Climate change is a clear and present danger that costs Canadians more than $1 billion in insured damages each and every year, due to storms, floods and

gases over the next 12 years. The two main pillars are electrification of the economy – including the natural gas industry – and lower-carbon standards for both

EARN YOUR MASTER DEGREE IN 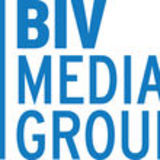