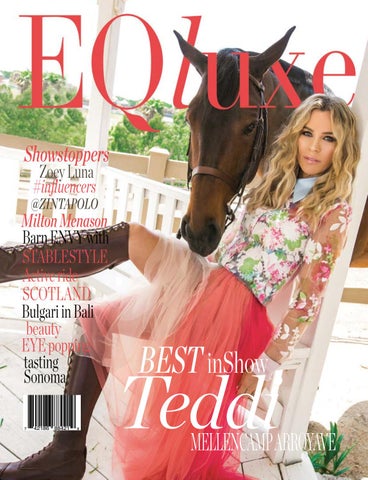 At the Beautiful Menlo Circus Club in Atherton, California MENLOCHARITYHORSESHOW.ORG

year has come to an end, as June marks our first anniversary of EQluxe. What a ride it has been (pun intended). When we embarked on this adventure a year ago we had no idea what was in store for us. We had always remained as an online platform and printing was a brave (perhaps insane) choice for certain but we were determined. We were blessed with a fabulous cover with a movie star, the always supportive Selma Blair, who coined our issue as “Maiden” and off we went! We know the horse-world was somewhat hesitant yet we hoped in the least they were curious to see what we could come up with that would separate us from other publications. Suffice to say, we had a plan and it was doing what we loved and using our experience in fashion and horses to present to our readers another option in an equestrian publication. I would like to believe that we have taken steps to getting closer to our original mission statement. I’m hopeful. So there you have it. Our second Summer Issue. Adoringly referred to as our Showstopper Issue. Truth be told, it was quite a task. (laughs) We wanted to do something unexpected and feature equestrians who were also influencers. Whether they were on TV, in a show ring, on a polo field, curating content, designing products, or visiting beautiful stables, we wanted to bring our favorites together and celebrate them. We are so thankful for the overwhelming support we have received in our first year and want to say thank you to everyone. Let’s just say, it was a lofty endeavor. Wrangling has never been one of my strong suits but with all of the schedules colliding it was a roundup for sure. (Maybe that was a bit snarky) Special thank you to our lovely cover girl Teddi Mellencamp. She was a trooper to say the least and as the results will show a pro through and through. Thanks again for joining the ride…here’s to another year!

A big thanks to everyone! Shelli Wright &amp; Christopher Bredesen Editors | Co-founders

EQLUXE is a registered trademark and is the sister publication of BISOUS Magazine distributed by Captain Buddy LLC of Los Angeles. All Eqluxe sponsorship or submission inquiries please contact director@eqluxe.com www.eqluxe.com

EQluxe is an equestrian life-style aesthetic and quarterly print publication and website curated by riders & stylecasters who combined their love for horses with their appreciation for high-fashion and a luxury lifestyle. All of us at EQluxe strive to deliver content and a marketplace that upholds the affluent equestrian tradition while supporting the emerging rider’s community. EQluxe provides you a dynamic window to shop your future. EQluxe can be found in affluent equestrian communities, luxury saddleries, prominent events and of course on our EQluxe website. 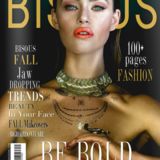