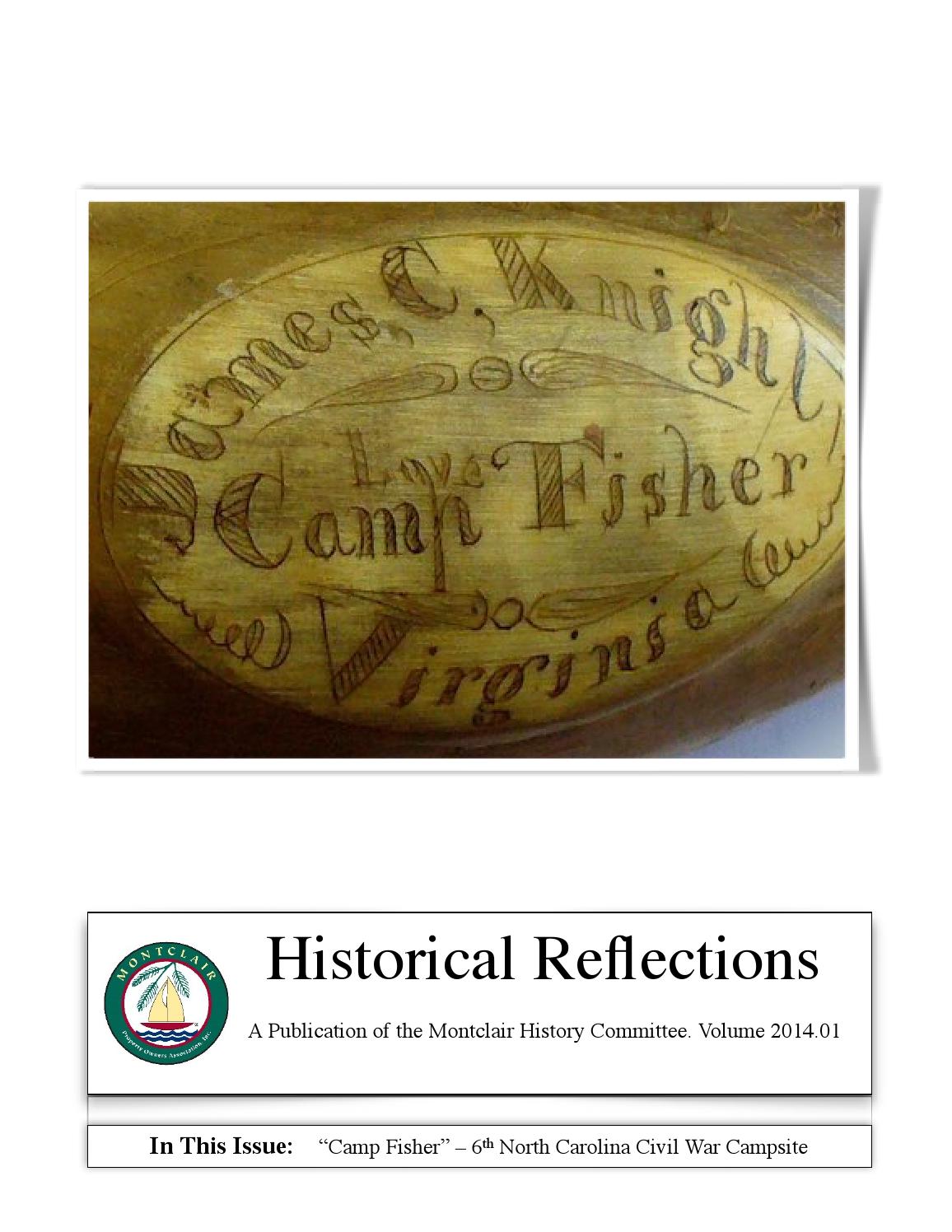 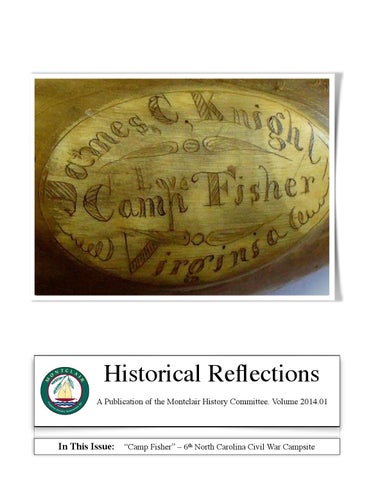 A Publication of the Montclair History Committee. Volume 2014.01

! Our Stories Begin ! Hello Montclair! We are blessed with a community located in a historically rich section of America. Montclair is located in northern Virginia, 25 miles south of the Washington Monument. Its heritage is distinctive in several respects, from the travels of George Washington through the area, to the Confederate troops who camped here, to the pioneering families who moved in the 1970s to this first residential planned community in Prince William County. 2004 Tim Singstock and Robert Alton can be credited with revitalizing our History Committee about 10 years ago. The impetus was Robert’s research into Camp Fisher and his and Tim’s desire to commemorate the long lost camp location with a marker. Bill Riski and Barbara Templeton joined the committee around that year too and in the fall of 2005 the marker was done. Since then, the committee has accomplished much to keep our history alive; from other markers to a selfpublished book. Time to try a new communications medium.

2014 Today your History Committee consists of: •

This online magazine marks a new chapter in our efforts to get history in front of our residents and neighbors. We’ll publish and refresh some prior articles and hopefully contribute some new stories. For this inaugural edition, let’s start where your committee did 10 years ago; with Camp Fisher.

As the 145th Anniversary of the Civil War approaches, a historic marker was recently erected in Dumfries, Virginia that identifies the 1861-62 winter campsite “Camp Fisher” of the famed 6th North Carolina State Infantry. The 6th NC or “The Bloody Sixth” as referred to by historians, draws its roots from Burlington, NC where it was initially mustered and outfitted for service in the summer of 1861. The 6th North Carolina was in northern Virginia at the onset of the Civil War and decisively engaged in the Battle of First Manassas (July 21, 1861). It was here that their commander Colonel Charles F. Fisher was killed in action while leading a gallant charge against Federal artillery. After the battle, the 6th camped at a place called “Camp Jones,” an area that soon became miserable as dozens of the men were dying from disease. Fortunately, a little more than a month later the 6th was given orders to move 12 miles east in September 1861 and were among the first infantry Soldiers to occupy the area around Dumfries in support of the new Confederate Artillery emplacements or “batteries” along the Potomac River (Cockpit Point, Evansport, and Freestone Batteries.) The batteries were created in an effort to halt commerce along the Potomac which at the time was a major supply line for the North. The batteries effectively blockaded Washington, D.C. for nearly six months. As a result, supplies to the Union Capital dwindled causing a significant increase in the price of goods and services of all kinds. Without the river, a single railroad track from Baltimore to D.C. was all that remained and soon proved to be logistically inadequate. Thus the blockade became a huge embarrassment for the Lincoln administration fresh off the heels of a northern defeat at First Manassas, something the north could ill afford. On the opposite end of the spectrum, the blockade was a Capstone event for the South, ending 1861 with yet another maverick success. In the midst of this great blockade, the 6th N.C. setup a summer bivouac in the area of what was to become the more permanent winter quarters “Camp Fisher.” The first name given to this site was “Camp Hill.” Later, as provisions were obtained from North Carolina and sufficient logs acquired by cutting local trees, more permanent quarters were established just in time for winter. The location was adjacent to the summer camp and along a ridge line just a few hundred feet from Powell’s Creek. The 6th N.C. officially named the site in honor of Colonel Fisher. They would remain in this location for the duration of the winter, often partaking in force marches to protect the batteries along the river. There were other confederate infantry regiments also camped in the Dumfries area including the 1st, 4th &amp; 5th Texas, 4th Alabama, 2nd &amp; 11th Mississippi, and the 18th Georgia. On March 8, 1862 the 6th NC and the other regiments were given orders to abandon their camps and head south in support of a new defensive line being formed around Fredericksburg. The camps were burned and the batteries abandoned. Artillery pieces that could not be removed quickly, were spiked or otherwise destroyed. Two of these cannons were 5 | M o n t c l a i r H i s t o r y – 2 0 1 4 . 0 1

recovered in the 1960s and are on display at the Quantico Marine Corps Museum on Jefferson Davis Highway (Route 1) in Triangle, Virginia. At its peak, Camp Fisher contained some 100 winter huts, occupied by nearly 750 soldiers and included a doctor’s office, quartermasters depot and horse stables. It was often referred to as a “City in the Wilderness” by other Soldiers camped nearby. In fact, many families from North Carolina made the trek in the middle of winter to Camp Fisher to visit their loved ones. Col. Dorsey Pender, who replaced Col. Fisher, commanded the 6th beginning at the time they were in camp. Many letters written by the Soldiers, expressed satisfaction with the site – it was good to get out of the cold and settle down for a while. Overall it proved to be a place of great contentment for the troops. An event to honor this site was held in late October 2005 on the same ground as the historic camp and included the unveiling of a bronze plaque followed by a ceremony attended by nearly 100 residents and special guests. The plaque was a long overdue concept. Camp Fisher is now in and amongst a housing development named Montclair, off Route 234 some 6 miles northwest of the town of Dumfries. The facts surrounding the campsite had remained an unknown part of the community’s history. My family home and dozens of others were built (1979-80) literally on top of the site. It wasn’t until the winter of 2004 when fate would cross my path with noted relic hunters James Wilson and later Howard Crouch that the camp’s existence resurfaced. Both James Wilson and Howard Crouch were part of a lucky few who had the chance to see the camp late in 1969 and into the early 1970s prior to development. They possessed a wealth of knowledge on its location and artifacts recovered from the site. Yet like many other relic hunters and history buffs, they had not returned to the area since the time of development and so could not reference a modern street name to pin point the proverbial “X” marks the spot. However, after a few trips of going back and forth comparing Howard Crouch’s old topographical maps to new ones, plus a few visits to the Prince William County Geographical Information Systems office, and finally a walk through the neighborhood with James Wilson – the mystery was solved. Having this information in hand, added with the positive reminiscing of Mr. Wilson on what he described had once been a pristine spot nestled along the ridge, amidst a beautiful forest of tall oak trees and how amazing that the campsite had been left untouched for so many years. James and Howard relayed that when people first came upon it in 1969 there were pots and pans left in the fireplaces of the huts, bottles, buttons and many belt buckles were found throughout. After gleaning this information from Jim, I came to the conclusion that something more needed to be done. The goal would be to honor an important site and then to share the information with the community leading to the conclusion of placing an historic marker within the original boundary of the camp. This was accomplished about twelve months later by working closely 6 | M o n t c l a i r H i s t o r y – 2 0 1 4 . 0 1

with the housing developmentâ&amp;#x20AC;&amp;#x2122;s board of directors and volunteer history committee, who proved to be a group of talented individuals committed to enriching the present, by remembering the past. The plaque was donated by the Alton family of Dumfries and installed with the assistance of members from the Montclair History Committee. Additional funds to support landscaping and food &amp; beverage for the ceremony were donated by the Montclair Lions Club. All in all, the event was a huge success. The marker stands in a convenient location along a wooded easement area that borders Waterway Drive &amp; Larkspur Lane in Montclair. As I drive by the plaque today there is often a person or sometimes a group of people gathered and reading the information. It will be available for generations to come providing them the opportunity to learn of the rich history and events that took place, literally on the ground below their feet. 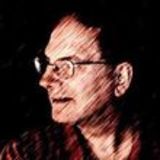