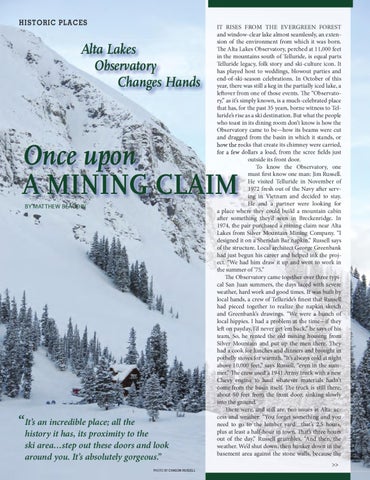 IT RISES FROM THE EVERGREEN FOREST and window-clear lake almost seamlessly, an extension of the environment from which it was born. The Alta Lakes Observatory, perched at 11,000 feet in the mountains south of Telluride, is equal parts Telluride legacy, folk story and ski-culture icon. It has played host to weddings, blowout parties and end-of-ski-season celebrations. In October of this year, there was still a keg in the partially iced lake, a leftover from one of those events. The “Observatory,” as it’s simply known, is a much-celebrated place that has, for the past 35 years, borne witness to Telluride’s rise as a ski destination. But what the people who toast in its dining room don’t know is how the Observatory came to be—how its beams were cut and dragged from the basin in which it stands, or how the rocks that create its chimney were carried, for a few dollars a load, from the scree fields just outside its front door. To know the Observatory, one must first know one man: Jim Russell. He visited Telluride in November of 1972 fresh out of the Navy after serving in Vietnam and decided to stay. He and a partner were looking for a place where they could build a mountain cabin after something they’d seen in Breckenridge. In 1974, the pair purchased a mining claim near Alta Lakes from Silver Mountain Mining Company. “I designed it on a Sheridan Bar napkin,” Russell says of the structure. Local architect George Greenbank had just begun his career and helped ink the project. “We had him draw it up and went to work in the summer of ’75.” The Observatory came together over three typical San Juan summers, the days laced with severe weather, hard work and good times. It was built by local hands, a crew of Telluride’s finest that Russell had pieced together to realize the napkin sketch and Greenbank’s drawings. “We were a bunch of local hippies. I had a problem at the time—if they left on payday, I’d never get ’em back,” he says of his team. So, he rented the old mining housing from Silver Mountain and put up the men there. They had a cook for lunches and dinners and brought in potbelly stoves for warmth. “It’s always cold at night above 10,000 feet,” says Russell, “even in the summer.” The crew used a 1941 Army truck with a new Chevy engine to haul whatever materials hadn’t come from the basin itself. The truck is still there, about 50 feet from the front door, sinking slowly into the ground. There were, and still are, two issues at Alta: access and weather. “You forget something and you need to go to the lumber yard…that’s 2.5 hours, plus at least a half-hour in town. That’s three hours out of the day,” Russell grumbles. “And then, the weather. We’d shut down, then hunker down in the basement area against the stone walls, because the

Once upon A MINING CLAIM BY MATTHEW BEAUDIn

“ It’s an incredible place; all the

history it has, its proximity to the ski area…step out these doors and look around you. It’s absolutely gorgeous.”