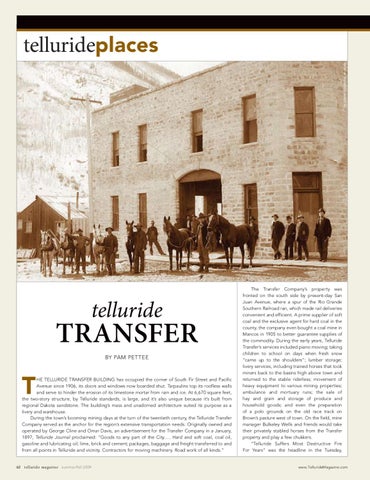 he Telluride Transfer building has occupied the corner of South Fir Street and Pacific Avenue since 1906, its doors and windows now boarded shut. Tarpaulins top its roofless walls and serve to hinder the erosion of its limestone mortar from rain and ice. At 6,670 square feet, the two-story structure, by Telluride standards, is large, and it’s also unique because it’s built from regional Dakota sandstone. The building’s mass and unadorned architecture suited its purpose as a livery and warehouse. During the town’s booming mining days at the turn of the twentieth century, the Telluride Transfer Company served as the anchor for the region’s extensive transportation needs. Originally owned and operated by George Cline and Omar Davis, an advertisement for the Transfer Company in a January, 1897, Telluride Journal proclaimed: “Goods to any part of the City…. Hard and soft coal, coal oil, gasoline and lubricating oil; lime, brick and cement; packages, baggage and freight transferred to and from all points in Telluride and vicinity. Contractors for moving machinery. Road work of all kinds.”

The Transfer Company’s property was fronted on the south side by present-day San Juan Avenue, where a spur of the Rio Grande Southern Railroad ran, which made rail deliveries convenient and efficient. A prime supplier of soft coal and the exclusive agent for hard coal in the county, the company even bought a coal mine in Mancos in 1905 to better guarantee supplies of the commodity. During the early years, Telluride Transfer’s services included piano moving; taking children to school on days when fresh snow “came up to the shoulders”; lumber storage; livery services, including trained horses that took miners back to the basins high above town and returned to the stable riderless; movement of heavy equipment to various mining properties; ambulance and mortuary runs; the sale of hay and grain and storage of produce and household goods; and even the preparation of a polo grounds on the old race track on Brown’s pasture west of town. On the field, mine manager Bulkeley Wells and friends would take their privately stabled horses from the Transfer property and play a few chukkers. “Telluride Suffers Most Destructive Fire For Years” was the headline in the Tuesday,