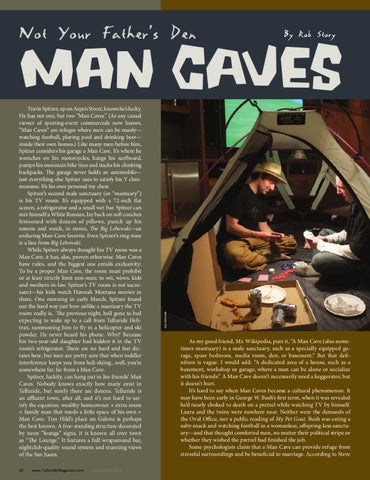 Not Your Father’s Den

Travis Spitzer, up on Aspen Street, knows he’s lucky. He has not one, but two “Man Caves.” (As any casual viewer of sporting-event commercials now knows, “Man Caves” are refuges where men can be manly— watching football, playing pool and drinking beer— inside their own homes.) Like many men before him, Spitzer considers his garage a Man Cave. It’s where he wrenches on his motorcycles, hangs his surfboard, pumps his mountain bike tires and stacks his climbing backpacks. The garage never holds an automobile— just everything else Spitzer uses to satisfy his Y chromosome. It’s his own personal toy chest. Spitzer’s second male sanctuary (or “mantuary”) is his TV room. It’s equipped with a 72-inch flat screen, a refrigerator and a small wet bar. Spitzer can mix himself a White Russian, lay back on soft couches festooned with dozens of pillows, punch up his remote and watch, in stereo, The Big Lebowski—an enduring Man-Cave favorite. Even Spitzer’s ring-tone is a line from Big Lebowski. While Spitzer always thought his TV room was a Man Cave, it has, alas, proven otherwise. Man Caves have rules, and the biggest one entails exclusivity: To be a proper Man Cave, the room must prohibit or at least strictly limit non-men: to wit, wives, kids and mothers-in-law. Spitzer’s TV room is not sacrosanct—his kids watch Hannah Montana movies in there. One morning in early March, Spitzer found out the hard way just how unlike a mantuary the TV room really is. The previous night, he’d gone to bed expecting to wake up to a call from Telluride Helitrax, summoning him to fly in a helicopter and ski powder. He never heard his phone. Why? Because his two-year-old daughter had hidden it in the TV room’s refrigerator. There are no hard and fast dictates here, but men are pretty sure that when toddler interference keeps you from heli-skiing...well, you’re somewhere far, far from a Man Cave. Spitzer, luckily, can hang out in his friends’ Man Caves. Nobody knows exactly how many exist in Telluride, but surely there are dozens. Telluride is an affluent town, after all, and it’s not hard to satisfy the equation: wealthy homeowner + extra room + family man that needs a little space of his own = Man Cave. Tim Hild’s place on Galena is perhaps the best known. A free-standing structure decorated by neon “lounge” signs, it is known all over town as “The Lounge.” It features a full wraparound bar, nightclub-quality sound system and stunning views of the San Juans.

As my good friend, Mr. Wikipedia, puts it, “A Man Cave (also sometimes mantuary) is a male sanctuary, such as a specially equipped garage, spare bedroom, media room, den, or basement.” But that definition is vague. I would add: “A dedicated area of a house, such as a basement, workshop or garage, where a man can be alone or socialize with his friends.” A Man Cave doesn’t necessarily need a keggerator, but it doesn’t hurt. It’s hard to say when Man Caves became a cultural phenomenon. It may have been early in George W. Bush’s first term, when it was revealed he’d nearly choked to death on a pretzel while watching TV by himself. Laura and the twins were nowhere near. Neither were the demands of the Oval Office, nor a public reading of My Pet Goat. Bush was eating a salty snack and watching football in a womanless, offspring-less sanctuary—and that thought comforted men, no matter their political stripe or whether they wished the pretzel had finished the job. Some psychologists claim that a Man Cave can provide refuge from stressful surroundings and be beneficial to marriage. According to Steve