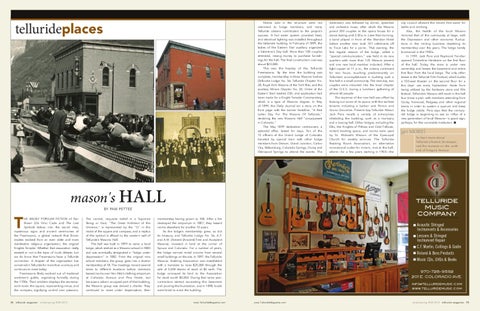 Shares sold in the structure were not restricted to lodge members, and many Telluride citizens contributed to the project’s success. A hot water system provided heat, and electrical lighting was installed throughout the Italianate building. In February of 1899, the ladies of the Eastern Star auxiliary organized a Valentine’s Day ball. More than 100 couples attended, raising money to purchase furnishings for the hall. The final construction cost was about $23,000. This was the heyday of the Telluride Freemasons. By the time the building was complete, membership in three Masonic bodies (Telluride Lodge No. 56; Telluride Chapter No. 28, Royal Arch Masons of the York Rite; and the auxiliary Miriam Chapter No. 20, Order of the Eastern Star) totaled 250, and application had been made for a Knight Templar Commandery, which is a type of Masonic degree. In May of 1899, the Daily Journal ran a story on the front page with the banner headline, “A Red Letter Day For The Masons Of Telluride,” declaring the new Masonic Hall “unsurpassed in Colorado.” The May 1899 dedication ceremonies, a splendid affair, lasted for days. Ten of the 15 officers of the Grand Lodge of Colorado traveled by special train with other lodge members from Denver, Grand Junction, Cañon City, Walsenburg, Colorado Springs, Ouray and Glenwood Springs to attend the events. The

The central, requisite belief in a Supreme Being or God, “The Great Architect of the Universe,” is represented by the “G” in the midst of the square and compass, and a replica of this symbol is affixed to the western wall of Telluride’s Masonic Hall. The hall was built in 1899 to serve a local lodge, which started as a Masonic school in 1880 and was eventually designated a “lodge under dispensation” in 1882. From the original nine school members, the group grew into a charter membership of 18. The meetings moved several times to different locations before members leased rooms over Van Atta’s clothing emporium at Colorado Avenue and Pine Street, but because a saloon occupied part of that building, the Masonic group was denied a charter. They continued to meet under dispensation, their

membership having grown to 104. After a fire destroyed the emporium in 1887, they leased rooms elsewhere for another 10 years. As the lodge’s membership grew, so did its treasury, and Telluride Lodge No. 56, A.F. and A.M. (Antient [Ancient] Free and Accepted Masons), invested in land at the corner of Spruce and Colorado. For a number of years, the lodge earned rental income from several small buildings on the site. In 1897, the Telluride Masonic Building Association was established with a mandate to raise $25,000 through the sale of 5,000 shares of stock at $5 each. The lodge conveyed its land to the Association for stock worth $3,000. During that same year, contractors started excavating the basement and pouring the foundation, and in 1898, locals were hired to erect the building.

city council allowed the miners free water for baths and drinking. Alas, the health of the local Masons mirrored that of the community at large, with the Depression and other economic fluctuations in the mining business depleting its membership over the years. The lodge barely functioned in the 1950s. In 1959, Jack Pera and Raymond Fancher opened Timberline Hardware on the first floor of the hall. Today, the store is under new ownership and leases the basement and entire first floor from the local lodge. The only other lessee is the Telluride Film Festival, which builds a 150-seat theater on the second floor for a few days’ use every September. Aside from being utilized by the hardware store and film festival, Telluride’s Masons still meet in the hall four times a year, with members attending from Ouray, Norwood, Ridgway and other regional towns in order to sustain a quorum and keep the lodge viable. Pera says that the centuryold lodge is beginning to see an influx of a new generation of local Masons—a good sign, perhaps, for this venerable institution. ■

[get MORE] To learn more about Telluride&#39;s historic landscape, visit the museum on the north end of Gregory Avenue

he wildly popular fiction of Dan Brown (Da Vinci Code and The Lost Symbol) delves into the secret rites, mysterious signs and ancient ceremonies of the Freemasons, a global network that Brown implies evolved from an even older and more clandestine religious organization, the original Knights Templar. Whether that association really existed or not is the topic of much debate, but we do know that Freemasons have a Telluride connection. A chapter of the organization has convened in Telluride for more than a century and continues to meet today. Freemasons likely evolved out of medieval workmen’s guilds, organizing formally during the 1700s. Their emblem displays the stonemason’s tools: the square, representing virtue, and the compass, signifying control over passions.

dedication was followed by dinner, speeches and orchestra music, after which the Masons joined 200 couples at the opera house for a dance lasting until 2:30 a.m. Later that morning, a band played in front of the Sheridan Hotel before another train took 101 celebrants off to Trout Lake for a picnic. That evening, the first regular session of the lodge, called a “special communication,” was held in its new quarters with more than 125 Masons present and one new local member inducted. After a light supper at 11 p.m., the oratory continued for two hours, touching predominantly on Telluride’s accomplishment in building such a fine hall in a small community. The next day, two couples were inducted into the local chapter of the O.E.S. during a luncheon gathering of almost 60 people. The expense of the new hall was offset by leasing out some of its space, with the earliest tenants including a barber and Perino and Giono Groceries. Present-day Telluride Mason Jack Pera recalls a variety of enterprises inhabiting the building, such as a mortuary and a boxing hall. Other lodges, including the Elks, the Knights of Pithias and Odd Fellows, rented meeting space, and rooms were used by St. Michael’s Mission of the Episcopal Church for weekly services. The Telluride Reading Room Association, an alternative recreational outlet for miners, met at the hall, where—for a few years starting in 1903—the