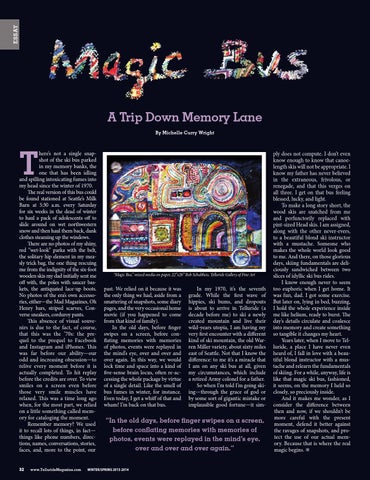 A Trip Down Memory Lane By Michelle Curry Wright

here’s not a single snapshot of the ski bus parked in my memory banks, the one that has been idling and spilling intoxicating fumes into my head since the winter of 1970. The real version of this bus could be found stationed at Seattle’s Milk Barn at 5:30 a.m. every Saturday for six weeks in the dead of winter to haul a pack of adolescents off to slide around on wet northwestern snow and then haul them back, dank clothes steaming up the windows. There are no photos of my shiny, red “wet-look” parka with the belt, the solitary hip element in my measly trick bag, the one thing rescuing me from the indignity of the six-foot wooden skis my dad initially sent me off with, the poles with saucer baskets, the antiquated lace-up boots. No photos of the era’s own accessories, either—the Mad Magazines, Oh Henry bars, striped scarves, Converse sneakers, corduroy pants. This absence of visual souvenirs is due to the fact, of course, that this was the ’70s: the prequel to the prequel to Facebook and Instagram and iPhones. This was far before our ability—our odd and increasing obsession—to relive every moment before it is actually completed. To hit replay before the credits are over. To view smiles on a screen even before those very smile muscles have relaxed. This was a time long ago when, for the most part, we relied on a little something called memory for cataloging the moment. Remember memory? We used it to recall lots of things, in fact— things like phone numbers, directions, names, conversations, stories, faces, and, more to the point, our 32

past. We relied on it because it was the only thing we had, aside from a smattering of snapshots, some diary pages, and the very occasional home movie (if you happened to come from that kind of family). In the old days, before finger swipes on a screen, before conflating memories with memories of photos, events were replayed in the mind’s eye, over and over and over again. In this way, we would lock time and space into a kind of five-sense brain locus, often re-accessing the whole package by virtue of a single detail. Like the smell of bus fumes in winter, for instance. Even today, I get a whiff of that and wham! I’m back on that bus.

In my 1970, it’s the seventh grade. While the first wave of hippies, ski bums, and dropouts is about to arrive in Telluride (a decade before me) to ski a newly created mountain and live their wild-years utopia, I am having my very first encounter with a different kind of ski mountain, the old Warren Miller variety, about sixty miles east of Seattle. Not that I know the difference: to me it’s a miracle that I am on any ski bus at all, given my circumstances, which include a retired Army colonel for a father. So when I’m told I’m going skiing—through the grace of god or by some sort of gigantic mistake or implausible good fortune—it sim-

“In the old days, before finger swipes on a screen, before conflating memories with memories of photos, events were replayed in the mind’s eye, over and over and over again.”

ply does not compute. I don’t even know enough to know that canoelength skis will not be appropriate. I know my father has never believed in the extraneous, frivolous, or renegade, and that this verges on all three. I get on that bus feeling blessed, lucky, and light. To make a long story short, the wood skis are snatched from me and perfunctorily replaced with pint-sized Head skis. I am assigned, along with the other never-evers, to a beautiful blond ski instructor with a mustache. Someone who makes the whole world look good to me. And there, on those glorious days, skiing fundamentals are deliciously sandwiched between two slices of idyllic ski bus rides. I know enough never to seem too euphoric when I get home. It was fun, dad. I got some exercise. But later on, lying in bed, buzzing, I hold the whole experience inside me like helium, ready to burst. The day’s details circulate and coalesce into memory and create something so tangible it changes my heart. Years later, when I move to Telluride, a place I have never even heard of, I fall in love with a beautiful blond instructor with a mustache and relearn the fundamentals of skiing. For a while, anyway, life is like that magic ski bus, fashioned, it seems, on the memory I held so closely, so preciously inside. And it makes me wonder, as I consider the difference between then and now, if we shouldn’t be more careful with the present moment, defend it better against the ravages of snapshots, and protect the use of our actual memory. Because that is where the real magic begins. e