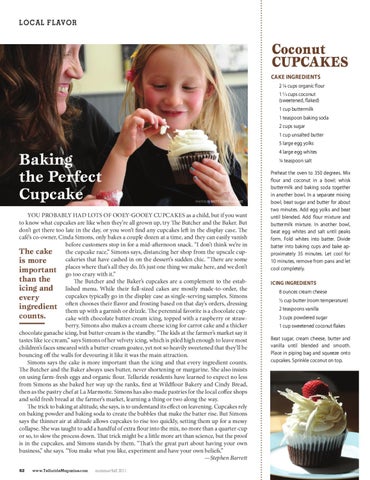 You probably had lots of ooey-gooey cupcakes as a child, but if you want to know what cupcakes are like when they’re all grown up, try The Butcher and the Baker. But don’t get there too late in the day, or you won’t find any cupcakes left in the display case. The café’s co-owner, Cinda Simons, only bakes a couple dozen at a time, and they can easily vanish before customers stop in for a mid-afternoon snack. “I don’t think we’re in The cake the cupcake race,” Simons says, distancing her shop from the upscale cupcakeries that have cashed in on the dessert’s sudden chic. “There are some is more where that’s all they do. It’s just one thing we make here, and we don’t important places go too crazy with it.” than the The Butcher and the Baker’s cupcakes are a complement to the estabicing and lished menu. While their full-sized cakes are mostly made-to-order, the cupcakes typically go in the display case as single-serving samples. Simons every chooses their flavor and frosting based on that day’s orders, dressing ingredient often them up with a garnish or drizzle. The perennial favorite is a chocolate cupcounts. cake with chocolate butter-cream icing, topped with a raspberry or strawberry. Simons also makes a cream cheese icing for carrot cake and a thicker chocolate ganache icing, but butter-cream is the standby. “The kids at the farmer’s market say it tastes like ice cream,” says Simons of her velvety icing, which is piled high enough to leave most children’s faces smeared with a butter-cream goatee, yet not so heavily sweetened that they’ll be bouncing off the walls for devouring it like it was the main attraction. Simons says the cake is more important than the icing and that every ingredient counts. The Butcher and the Baker always uses butter, never shortening or margarine. She also insists on using farm-fresh eggs and organic flour. Telluride residents have learned to expect no less from Simons as she baked her way up the ranks, first at Wildflour Bakery and Cindy Bread, then as the pastry chef at La Marmotte. Simons has also made pastries for the local coffee shops and sold fresh bread at the farmer’s market, learning a thing or two along the way. The trick to baking at altitude, she says, is to understand its effect on leavening. Cupcakes rely on baking powder and baking soda to create the bubbles that make the batter rise. But Simons says the thinner air at altitude allows cupcakes to rise too quickly, setting them up for a messy collapse. She was taught to add a handful of extra flour into the mix, no more than a quarter-cup or so, to slow the process down. That trick might be a little more art than science, but the proof is in the cupcakes, and Simons stands by them. “That’s the great part about having your own business,” she says. “You make what you like, experiment and have your own beliefs.” —Stephen Barrett 62