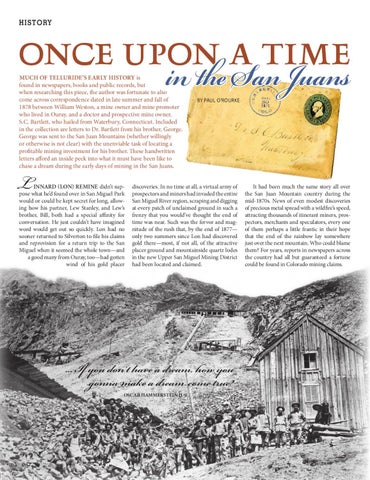 Once Upon a Time in the San Juans Much of Telluride’s early history is found in newspapers, books and public records, but when researching this piece, the author was fortunate to also come across correspondence dated in late summer and fall of 1878 between William Weston, a mine owner and mine promoter who lived in Ouray, and a doctor and prospective mine owner, S.C. Bartlett, who hailed from Waterbury, Connecticut. Included in the collection are letters to Dr. Bartlett from his brother, George. George was sent to the San Juan Mountains (whether willingly or otherwise is not clear) with the unenviable task of locating a profitable mining investment for his brother. These handwritten letters afford an inside peek into what it must have been like to chase a dream during the early days of mining in the San Juans.

innard (Lon) Remine didn’t suppose what he’d found over in San Miguel Park would or could be kept secret for long, allowing how his partner, Lew Stanley, and Lew’s brother, Bill, both had a special affinity for conversation. He just couldn’t have imagined word would get out so quickly. Lon had no sooner returned to Silverton to file his claims and reprovision for a return trip to the San Miguel when it seemed the whole town—and a good many from Ouray, too—had gotten wind of his gold placer

discoveries. In no time at all, a virtual army of prospectors and miners had invaded the entire San Miguel River region, scraping and digging at every patch of unclaimed ground in such a frenzy that you would’ve thought the end of time was near. Such was the fervor and magnitude of the rush that, by the end of 1877— only two summers since Lon had discovered gold there—most, if not all, of the attractive placer ground and mountainside quartz lodes in the new Upper San Miguel Mining District had been located and claimed.

... If you don’t have a dream, how you gonna make a dream come true?

It had been much the same story all over the San Juan Mountain country during the mid-1870s. News of even modest discoveries of precious metal spread with a wildfire’s speed, attracting thousands of itinerant miners, prospectors, merchants and speculators, every one of them perhaps a little frantic in their hope that the end of the rainbow lay somewhere just over the next mountain. Who could blame them? For years, reports in newspapers across the country had all but guaranteed a fortune could be found in Colorado mining claims.