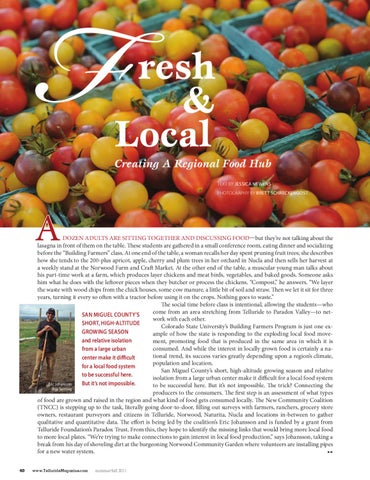 dozen adults are sitting together and discussing food—but they’re not talking about the lasagna in front of them on the table. These students are gathered in a small conference room, eating dinner and socializing before the “Building Farmers” class. At one end of the table, a woman recalls her day spent pruning fruit trees; she describes how she tends to the 200-plus apricot, apple, cherry and plum trees in her orchard in Nucla and then sells her harvest at a weekly stand at the Norwood Farm and Craft Market. At the other end of the table, a muscular young man talks about his part-time work at a farm, which produces layer chickens and meat birds, vegetables, and baked goods. Someone asks him what he does with the leftover pieces when they butcher or process the chickens. “Compost,” he answers. “We layer the waste with wood chips from the chick houses, some cow manure, a little bit of soil and straw. Then we let it sit for three years, turning it every so often with a tractor before using it on the crops. Nothing goes to waste.” The social time before class is intentional, allowing the students—who come from an area stretching from Telluride to Paradox Valley—to netSan Miguel County’s work with each other. short, high-altitude Colorado State University’s Building Farmers Program is just one exgrowing season ample of how the state is responding to the exploding local food moveand relative isolation ment, promoting food that is produced in the same area in which it is consumed. And while the interest in locally grown food is certainly a nafrom a large urban tional trend, its success varies greatly depending upon a region’s climate, center make it difficult population and location. for a local food system San Miguel County’s short, high-altitude growing season and relative to be successful here. isolation from a large urban center make it difficult for a local food system But it’s not impossible. Eric Johansson to be successful here. But it’s not impossible. The trick? Connecting the digs farming

producers to the consumers. The first step is an assessment of what types of food are grown and raised in the region and what kind of food gets consumed locally. The New Community Coalition (TNCC) is stepping up to the task, literally going door-to-door, filling out surveys with farmers, ranchers, grocery store owners, restaurant purveyors and citizens in Telluride, Norwood, Naturita, Nucla and locations in-between to gather qualitative and quantitative data. The effort is being led by the coalition’s Eric Johansson and is funded by a grant from Telluride Foundation’s Paradox Trust. From this, they hope to identify the missing links that would bring more local food to more local plates. “We’re trying to make connections to gain interest in local food production,” says Johansson, taking a break from his day of shoveling dirt at the burgeoning Norwood Community Garden where volunteers are installing pipes ▶▶ for a new water system. 40