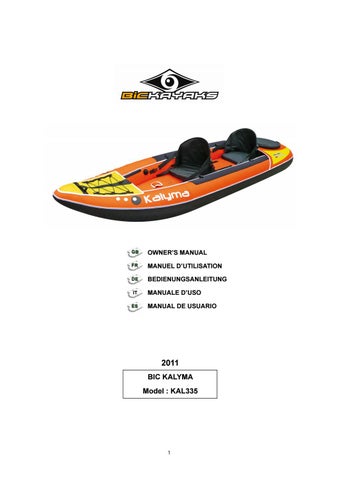 Congratulations on your purchase of the kayak. We are proud to bring you a quality product at an affordable price with excellent performance. Please take the time to read through this manual. It contains details of the kayak, its equipment, and information on its operation and maintenance. Familiarize yourself with this inflatable before using it on the water in order to ensure safety and to prevent accidents.

Indicates an imminently hazardous situation which, if not avoided, could result in death or serious injury or property damage.

There is a risk of serious injury or death from drowning. Paddle sports can be very dangerous and physically demanding. The user of this product acknowledges, understands, and assumes the risks involved in paddle sports. Observe the following safety standards and safe operating practices whenever using this product. • Always wear an approved personal flotation device. • Wear kayak vests, which are not as low in the back as a marine PFD. • Do not exceed maximum weight capacity. Regardless of the number of persons on board, the total weight of persons and equipment must not exceed maximum weight capacity. • Do not operate the kayak under the influence of drugs or alcohol. • Wear a helmet when appropriate. • Do not paddle alone. • Children must be supervised by a responsible adult at all times. • Dress appropriately for weather and marine conditions; cold water and cold weather can result in hypothermia. • Beware of offshore winds and currents as they can take you out to sea. • Check weather forecasts and obtain local knowledge of the marine environment and weather conditions prior to your voyage. • Do not exceed your paddling ability; be aware of your limitations. • Be aware of safe river water levels, tidal changes, currents, and obstacles in and above the water. • Check your equipment prior to each use for signs of wear, leaks or failure. • Tie a leash to your paddle when appropriate. • Always inform someone of your paddling route, the time and place of your departure and your intended time and place of arrival. • Always carry identification. • Do not paddle in flood conditions. • Make sure you are able to exit the craft if necessary. • Scout unfamiliar waters; portage where appropriate.

Any use of an air compressor may result in poor performance or damage to the kayak, and automatically voids all warranties. If you leave your kayak exposed to the hot sun, check the pressure and deflate it slightly. Otherwise the kayak may become over inflated and stretch the material. The ambient temperature affects the tube’s internal pressure : a variation of 1°C/ 1.8°F causes a variation of the pressure in the tube of +/- 4 mBar (0.06psi)

It is recommended to use the detachable skeg in deep water (lake, sea, ) where it will allow you to move forward in a straight line. Do not use it in shallow water or white water: the skeg would deteriorate the bottom of the kayak in shallow water and reduce the maneuverability in white water. The kayak is equipped with moulded directional strakes to allow good performance without the skeg. First partially deflate the kayak. The skeg cannot be installed when the kayak is fully inflated. The curvature of the skeg must be pointed towards the back end of the kayak. Before Assembly

Your kayak has been designed with a drain system located on the underside of the kayak in the rear. It consists of a fixed base and a screwable cap. Use in calm waters and to ensure a dry ride: screw the cap closed before putting the kayak into the water. Use in whitewater: unscrew the cap (and store it safely into the bag located in the rear of the seat) which allows the kayak to be self- bailing. Closed

ADJUSTABLE SEAT(S) Your kayak is supplied with a (or several) adjustable seat(s), featuring a comfortable high backrest. The seat is held in place by the velcro strips on the underside and by webbing straps on the sides of the backrest. Place the seat(s) into the kayak, matching the position of the Velcro strips on the floor. Attach the webbing straps from the sides of the backrest to the D-rings located inside the kayak, on the side walls/chambers. Tighten the straps as needed for proper back support. You can choose the seat position for one or two persons: please see the drawing. Before Assembly

MAINTENANCE 1. To deflate the kayak, remove the valve cap from the valves in the kayak floor and kayak body. 2. Clean and check the kayak as well as all the accessories. Make sure the kayak is completely dry before putting it away. Make sure that no sand nor gravel remains inside the kayak nor between the hull and the inner chambers: this could result in abrasion or even punctures while storing the kayak. 3. Fold the 2 sides into the middle, then roll it up from the opposite end of the valves (so remaining air can escape from the valves). 4. When storing your inflatable, keep it in a clean and dry place.

Whenever you take your kayak out of the water and deflate it, allow time for it to air out and dry. Neither the skin/hull or the inside chambers will suffer from water damage, but stagnant water could cause mildew and foul odor.

HOW TO REPAIR SMALL PUNCTURES Check that the tube is fully deflated and lies flat. 1. Prepare a round patch no less than 3 inches or 7 centimeters in diameter. 2. Clean the patch and the area surrounding the leak with Alcohol. 3. To contain excess glue, use masking tape to tape off the area around the patch. 4. Apply 3 thin, even coats of repair kit adhesive to both the surface of the kayak and the patch. Wait 5 minutes between each coat. 5. After the 3rd coat, apply the patch on the defect surface. Use a hand roller to apply the patch evenly. Pay special attention to the edges. 6. Wait 24 hours before re-inflating.

• Perform all of your repairs in a well-ventilated area. • Avoid inhaling glue vapors. • Avoid contact with the skin or the eyes. • Keep all repair materials (glue, solvents, etc) away from the reach of children. • Repairs on seams/welds must not be glued. Only the manufacturer of the kayak can perform such repairs.

Bic Sport warrants (legal warranty) to the original purchaser only, and from date of purchase, that the product is free from defects. The warranty applies only when this product is used for normal recreational purposes. Check with your local Bic Sport office for details on the length of this warranty, which varies for different countries. The warranty does not cover any puncture, cut or abrasion sustained in normal use or damage from unreasonable uses or improper storage. If any product is found to be defective, the owner may return it to the store where it was purchased along the original sales receipt. After inspection of any product found defective, Bic Sport shall either repair or replace the defective part or item as deemed necessary by Bic Sport. Bic Sport shall not be held liable for incidental and consequential damages. There are no warranties which extend beyond the description of the face hereof. This warranty is in lieu of all other warranties. This warranty gives you specific legal rights and you may also have other rights, which may vary, from country to country. The main limitations to the application of this warranty are the following; • The item must not be modified and/or fitted with a motor in excess of that allowed by the manufacturer or used in any activities outside normal recreational use (such as races, rental, or commercial usage). • Used in excess of the manufacturers recommended maximum load capacity. • Pressure recommendations, assembly / disassembly and handling procedures must be strictly observed. • The maintenance and the storage procedures must not be neglected. • This warranty does not cover parts and accessories not supplied or recommended by the manufacturer or defects resulting from the installation of such equipment on their products.

ALL REPAIRS COVERED BY WARRANTY MUST BE PERFORMED BY Bic Sport. This product is designed in accordance with standards for a specific use. Any modifications, transformations or use of a motor horse power higher than that indicated by the manufacturer could result in serious risks for the user and will void the warranty. 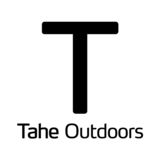