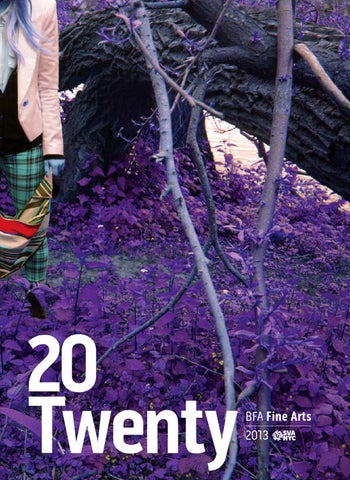 I’M THINKING ABOUT THAT MOMENT

engagement. As witnessed in the Berlin and

when the Fine Arts undergraduate end-of-course

show is installed, but the public has not yet seen

preneurs emerged since the 1990s who have

Similar to the moment before a party begins, display

leapfrogging their way to collectors and auction

is paramount. People have been up till 2:00 am the

night before, with hot-glue guns and masking

channels. Rather than becoming victims of an

tape, with plastic bags of installation bits and bobs.

This is the end of the degree, the work is

made (or not), the mission fulfilled or overstepped

spurred by a system where they find themselves

into new territories. There is a quiet in the studio.

playing on an uneven field, performing on a new

The years, months, hours and minutes of

stage where the proscenium has moved.

cacophony and struggle are over. At this point the

Let us stay with that moment where the fine

unwind and let go. And this moment is

not yet viewed. It is waiting in the early light of

groundbreaking because it is the first time these

the assessment day. We witness a moment of

these signs of art, the double-coded stuttering

Let’s hold onto that thought, that moment

of new languages, idioms and cartographies.

before consumption, judgment, assessment and

They are the stammering glyphs of vocabularies

and aesthetic revolutions yet to come.

The post-partum moment. This moment of art

some of these new tendencies and their mutant

work can provide a litmus test of future possibilities

marriages. Much of this year’s exhibition features a

for the culture—an oracular moment, a fortune

teller’s prophecy that frustratingly we can barely

and thoughts long before others do. This show

from the diaristic to an interest in deep

is the closest thing we have to an uncensored,

architectural space. There is a new fascination

with the uncanny object and the viral, as well as

a return to the body and blood using computer

This much is clear. Students graduating now

are no longer kowtowing to existing dominant art

systems because everything is up for grabs. The

languages. In painting, there is an engagement

with abstraction’s reconstitution, and with

Culture Wars of the 1980s, and the post-pluralism

memories of past, aberrant, archaic and

of recent times are over. All earlier paradigms

are rendered redundant in a new, globalized, digitized art world. A new breed of artists is responsible for reshaping the terms of curatorial and artistic

What is clearly discernible about younger artists working in the post-Koons era is that they are moving away from 1990s Grand Guignol gestures, and from first-wave Po-Mo finish fetish. The new

generation is returning to an economy of means, to subtle strategies. Their works are created for slow release. They are less heavy-handed and more cryptic. Some works in the show engage with visual density and physical structures refracted through emerging digital means. Others concern the morph, the disembodied machine-life and the mutant prosthetic amoeboid form bursting out of the laboratory. There is a return to poetics and the ephemeral, the fragmentary and fragile. This is not the short-lived, 1990s NYC “abject art” movement. This new iteration possesses delicacy, hybridity and a lightness of gesture, shot through with a fragility, decisiveness and permanence. Several works in this catalog illustrate this deftness of hand, showing a re-engagement with installation and conceptual forms, but using contemporary tropes (dry ice, fiber optics, fluorescent materials), with a light, playful—but decisive—hand and eye. They hypnotize us with optical soccer, the day-glo, the plastic, the synthetic real. This play constitutes an interrogation of the “real” in the era of the virtual. There is above all in this year’s graduating show a tremendous quickness and facility with form, and guile-free montaging which juxtaposes genres and movements into seamless new hybrid forms. Personal visions are carved out, rinsed and re-pasted into art for the new media age.

Take a close look at this early morning moment, watch closely now. These new languages are readable if you look carefully. 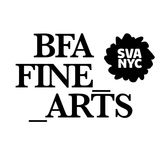