Beyond the Acorn February/March 2019 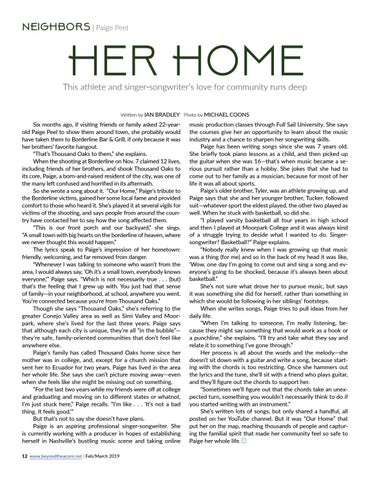 Six months ago, if visiting friends or family asked 22-yearold Paige Peel to show them around town, she probably would have taken them to Borderline Bar &amp; Grill, if only because it was her brothers’ favorite hangout. “That’s Thousand Oaks to them,” she explains. When the shooting at Borderline on Nov. 7 claimed 12 lives, including friends of her brothers, and shook Thousand Oaks to its core, Paige, a born-and-raised resident of the city, was one of the many left confused and horrified in its aftermath. So she wrote a song about it. “Our Home,” Paige&#39;s tribute to the Borderline victims, gained her some local fame and provided comfort to those who heard it. She’s played it at several vigils for victims of the shooting, and says people from around the country have contacted her to say how the song affected them. “This is our front porch and our backyard,” she sings. “A small town with big hearts on the borderline of heaven, where we never thought this would happen.” The lyrics speak to Paige’s impression of her hometown: friendly, welcoming, and far removed from danger. “Whenever I was talking to someone who wasn’t from the area, I would always say, ‘Oh it’s a small town, everybody knows everyone,’” Paige says. “Which is not necessarily true . . . (but) that’s the feeling that I grew up with. You just had that sense of family—in your neighborhood, at school, anywhere you went. You’re connected because you’re from Thousand Oaks.” Though she says “Thousand Oaks,” she’s referring to the greater Conejo Valley area as well as Simi Valley and Moorpark, where she’s lived for the last three years. Paige says that although each city is unique, they’re all “in the bubble”— they’re safe, family-oriented communities that don’t feel like anywhere else. Paige’s family has called Thousand Oaks home since her mother was in college, and, except for a church mission that sent her to Ecuador for two years, Paige has lived in the area her whole life. She says she can’t picture moving away—even when she feels like she might be missing out on something. “For the last two years while my friends were off at college and graduating and moving on to different states or whatnot, I’m just stuck here,” Paige recalls. “I’m like . . . ‘It’s not a bad thing. It feels good.’” But that’s not to say she doesn’t have plans. Paige is an aspiring professional singer-songwriter. She is currently working with a producer in hopes of establishing herself in Nashville’s bustling music scene and taking online 12 www.beyondtheacorn.net | Feb/March 2019

music production classes through Full Sail University. She says the courses give her an opportunity to learn about the music industry and a chance to sharpen her songwriting skills. Paige has been writing songs since she was 7 years old. She briefly took piano lessons as a child, and then picked up the guitar when she was 16—that’s when music became a serious pursuit rather than a hobby. She jokes that she had to come out to her family as a musician, because for most of her life it was all about sports. Paige’s older brother, Tyler, was an athlete growing up, and Paige says that she and her younger brother, Tucker, followed suit—whatever sport the eldest played, the other two played as well. When he stuck with basketball, so did she. “I played varsity basketball all four years in high school and then I played at Moorpark College and it was always kind of a struggle trying to decide what I wanted to do. Singersongwriter? Basketball?” Paige explains. “Nobody really knew when I was growing up that music was a thing (for me) and so in the back of my head it was like, ‘Wow, one day I’m going to come out and sing a song and everyone’s going to be shocked, because it’s always been about basketball.” She’s not sure what drove her to pursue music, but says it was something she did for herself, rather than something in which she would be following in her siblings’ footsteps. When she writes songs, Paige tries to pull ideas from her daily life. “When I’m talking to someone, I’m really listening, because they might say something that would work as a hook or a punchline,” she explains. “I’ll try and take what they say and relate it to something I’ve gone through.” Her process is all about the words and the melody—she doesn’t sit down with a guitar and write a song, because starting with the chords is too restricting. Once she hammers out the lyrics and the tune, she’ll sit with a friend who plays guitar, and they’ll figure out the chords to support her. “Sometimes we’ll figure out that the chords take an unexpected turn, something you wouldn’t necessarily think to do if you started writing with an instrument.” She’s written lots of songs, but only shared a handful, all posted on her YouTube channel. But it was “Our Home” that put her on the map, reaching thousands of people and capturing the familial spirit that made her community feel so safe to Paige her whole life. B

Beyond the Acorn February/March 2019