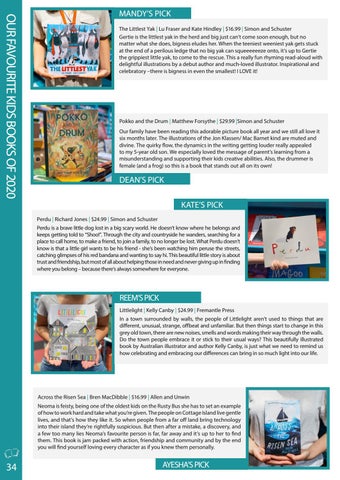 OUR FAVOURITE KIDS BOOKS OF 2020 CATEGORY

MANDY’S PICK The Littlest Yak | Lu Fraser and Kate Hindley | $16.99 | Simon and Schuster Gertie is the littlest yak in the herd and big just can’t come soon enough, but no matter what she does, bigness eludes her. When the teeniest weeniest yak gets stuck at the end of a perilous ledge that no big yak can squeeeeeeze onto, it’s up to Gertie the grippiest little yak, to come to the rescue. This a really fun rhyming read-aloud with delightful illustrations by a debut author and much-loved illustrator. Inspirational and celebratory –there is bigness in even the smallest! I LOVE it!

Pokko and the Drum | Matthew Forsythe | $29.99 |Simon and Schuster Our family have been reading this adorable picture book all year and we still all love it six months later. The illustrations of the Jon Klassen/ Mac Barnet kind are muted and divine. The quirky flow, the dynamics in the writing getting louder really appealed to my 5-year old son. We especially loved the message of parent’s learning from a misunderstanding and supporting their kids creative abilities. Also, the drummer is female (and a frog) so this is a book that stands out all on its own!

DEAN’S PICK KATE’S PICK Perdu | Richard Jones | $24.99 | Simon and Schuster Perdu is a brave little dog lost in a big scary world. He doesn’t know where he belongs and keeps getting told to “Shoo!”. Through the city and countryside he wanders, searching for a place to call home, to make a friend, to join a family, to no longer be lost. What Perdu doesn’t know is that a little girl wants to be his friend - she’s been watching him peruse the streets, catching glimpses of his red bandana and wanting to say hi. This beautiful little story is about trust and friendship, but most of all about helping those in need and never giving up in finding where you belong – because there’s always somewhere for everyone.

REEM’S PICK Littlelight | Kelly Canby | $24.99 | Fremantle Press In a town surrounded by walls, the people of Littlelight aren’t used to things that are different, unusual, strange, offbeat and unfamiliar. But then things start to change in this grey old town, there are new noises, smells and words making their way through the walls. Do the town people embrace it or stick to their usual ways? This beautifully illustrated book by Australian illustrator and author Kelly Canby, is just what we need to remind us how celebrating and embracing our differences can bring in so much light into our life.

Across the Risen Sea | Bren MacDibble | $16.99 | Allen and Unwin Neoma is feisty, being one of the oldest kids on the Rusty Bus she has to set an example of how to work hard and take what you’re given. The people on Cottage Island live gentle lives, and that’s how they like it. So when people from a far off land bring technology into their island they’re rightfully suspicious. But then after a mistake, a discovery, and a few too many lies Neoma’s favourite person is far, far away and it’s up to her to find them. This book is jam packed with action, friendship and community and by the end you will find yourself loving every character as if you knew them personally. 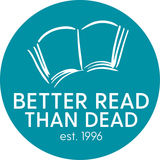 We ❤️ seeing you all in-store and are so grateful to have been able to stay open in various forms throughout 2020! However, we understand t...

We ❤️ seeing you all in-store and are so grateful to have been able to stay open in various forms throughout 2020! However, we understand t...