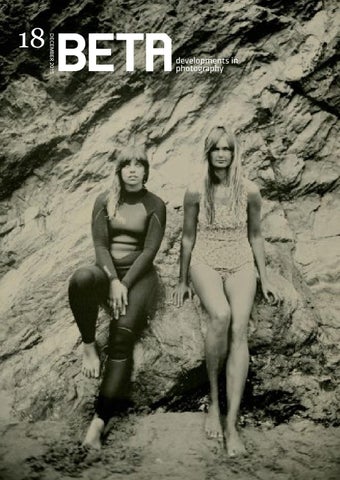 BETA developments in photography ISSUE 18 editor: Jeff Moorfoot design: Penelope Anne contact: beta@ballaratfoto.org All content in this magazine is ÂŠ 2015 of the Ballarat International Foto Biennale and participating artists, and may not be reproduced without the express written permission of the BIFB. Inc save for fair dealing for the purposes of research, study, criticism, review, reporting news. All other rights are reserved.

In this edition of BETA developments in photography we bring you five artists who participated in the Projections Program at the recent 2015 Ballarat International Foto Biennale. The BIFB’15 Projections Program was shown daily on a video wall in our key venue for the festival, the Ballarat Mining Exchange, and comprised 53 shows by 44 artists. A total of 78 invitations were made by the curatorial team of myself, Mark Avellino and Jennifer Dean. We were looking for shows that mirrored the same curatorial premise that underpins the whole festival, as well as this online magazine - namely a spread of genres and styles that demonstrate the broad

spectrum of the photographic idiom. The final selection included audio visuals by artists from 19 countries around the world, and ran in a continuous loop of just over 3 hours duration every day throughout the festival. The BIFB’15 Projections Program supplemented a Core Exhibition Program of 21 major shows, backed up by a supporting cast of 121 further exhibitions in the Fringe Program. In any man’s language, that’s a lot of photography! In this edition of BETA it is my pleasure to present images from five shows that featured as part of the BIFB’15 Projections Program. Che ‘Ahmad Azar is recognised as one of the 20 most respected Asian photographers, and his

I have been wandering the streets of Kuala Lumpur for as long as I can remember. As the years go by, I find myself becoming the very streets I walked. In 2007, I took a more avid interest in my found friendships and started photographing them with my small camera.

Che’ Ahmad Azhar is a lecturer at the Faculty of Creative Multimedia, Multimedia University, Malaysia. A passionate photographer, his work has been featured on the Invisible Photographer Asia (IPA) and LENS Blog The New York Times. He has also held solo exhibitions at the Obscura Photo Festival, Leica Gallery in Kuala Lumpur and Singapore as well as projection at 10th Angkor Photo Festival. Currently, he is working on a personal project entitled ‘Walk of Life’ – a visual documentation on the street life of Kuala Lumpur, the capital city of Malaysia. website: cheahmadazhar.com 11

I always made art as a child but it wasnâ&#x20AC;&#x2122;t until my last year of graduate school in Engineering that I realized you only have one life you know of and you might as well live it the way you want to. Obviously, I am talking about living life in a positive manner. I dropped out of school and have been an artist ever since. This was one of those ultimate decisions one makes in life and I was determined not to turn back. It has been a rough ride but I can finally say I am successful.

Kim Keever studied Engineering at Old Dominion University, Norfolk, VA and was briefly a thermal engineer working primarily on NASA projects. Keever changed career in the late 1970s to become a full time artist. Yet he has always drawn on his original vocation by retaining a scientific and investigative process in his work, while at the same time displaying an astute awareness of historical landscape art. Keever lives and works in New York City and his work is in numerous collections, including: the Metropolitan Museum of Art, New York; Museum of Modern Art, New York; Brooklyn Museum of Art, Brooklyn; Hirshhorn Museum, Washington, DC; Virginia Museum

SurfLand JONI STERNBACH SurfLand is an on-going series of contemporary tintype portraits of surfers made with large-format cameras and the historic wet-plate collodion process. Surfland images are all made on location and involve community participation while plates are prepared and processed. The photographs in this series were shot in Australia, England and on both coasts of the United States.

Joni Sternbach was born in the Bronx and currently resides in Brooklyn, NY. She is a visiting artist at The Cooper Union and faculty member at ICP and the Center for Alternative Photography in NYC where she teaches wet plate collodion. Sternbachâ&#x20AC;&#x2122;s work is part of many public collections including the Maison EuropĂŠenne de la Photographie, Nelson Atkins Museum, and National Portrait Gallery, London.

She is the recipient of several grants including NYFA and CAPS. Her recent monograph Surf Site Tin Type was published in Spring 2015. She is represented in NYC by Rick Wester Fine Art

My travels to Europe began 13 years back. While transiting through the Gulf States, I became fascinated with the bustling megalopolises of Arabia, a cold post-apocalyptic vision of towering megaliths seen across the hazy abrasive heat. Modern civilisation in Arabia was built with the sweat and grime of countless unremembered migrants. They travelled from the southern climes of the Indian subcontinent and South-East Asia, lured by dreams of better lives for themselves and those they left behind, fellow men from familiar lands, all setting forth westwards like me, towards their unknown destinies. Tricked by agents back home and cheated by the law of the land: lives lived on meagre food in unsanitary cramped quarters,

women raped and locked away in dingy rooms, men dead from exhaustion or dehydration or both, lives where basic human rights are stripped away to their very core. CROSSINGS is created with the help of Google Maps and Google Earth, wherein the images were taken. I show the society that the migrant diaspora has helped construct, shape and maintain while occupying the bottom echelons of society. The narrative is woven around quotations found in Academic Reports and Journalistic Articles on the existing state of affairs in Arabia. The quotations primarily deal with individual experiences of human rights abuses in Saudi Arabia, but also include the Emiratis and the Western expatriate population.

Arko Datto‘s works push boundaries in his practice to question what it means to be a photographer in the digital age, while simultaneously  playing the role of observer and commentator on critical contemporary social issues. While studying for his doctorate in the theoretical sciences he decided to change  course and explore the burgeoning field of contemporary photography.   He has  been ‘promenading’ across the globe for the past few years and now awaits the  next adventure in his travels Apart from working on his own photography related projects, Arko has also  curated exhibitions and has been  associated with the Kochi Biennale and OBSCURA Festival of Photography.

24 from 48 Gary Cockburn Originating in the urge to undertake a continent-wide travelogue in the manner of Robert Frankâ&#x20AC;&#x2122;s The Americans, the project 5000 Streets instead uses a single postcode as a metaphor for urban Australia. The series 24 From 48, presented here, draws on a single 48-hour period of work on the project.

After graduating with a degree in Maths and Physics, narrowly avoiding a career in cosmic ray research that would have meant relocating to Antarctica, Gary Cockburn worked as a journalist, editor, copywriter and graphic designer in London, Sydney and Adelaide. Along the way he studied Social Documentary photography at the University of Westminster. Though Cockburn’s route to photography may appear disjointed, his career moves have all centred on a single, essential discipline – communication – and all have informed his approach to photography. He is currently working on the final stages of two book-length projects, 5000 Streets and Into The Fringe. website: garycockburnphotography.com