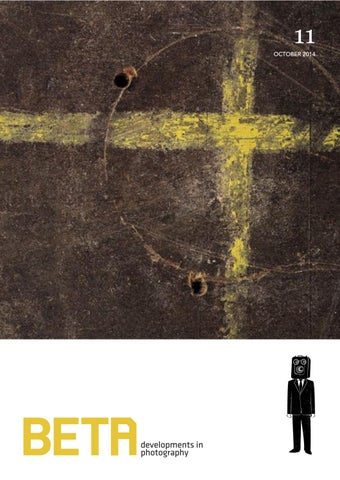 BETA developments in photography ISSUE 11 editor: Jeff Moorfoot design: Penelope Anne contact: beta@ballaratfoto.org web: beta.org.au All content in this magazine is ÂŠ 2014 of the Ballarat International Foto Biennale and participating artists, and may not be reproduced without the express written permission of the BIFB. Inc save for fair dealing for the purposes of research, study, criticism, review, reporting news. All other rights are reserved.

Welcome to BETA developments in photography number 11. This issue is somewhat later than planned and a little bit skinnier than previous editions… the best laid plans of mice and men!!... I pen this introduction from Shanghai, China, here to make a presentation about festivals of photography around the world in a few days time. Previous to that I was in the ancient walled city of Pingyao in Shanxi Province for the 14th Pingyao International Photo Festival [PIP] where we presented a major exhibition ‘The Wizards of Oz’ featuring ten Australian artists from previous BIFB Core Programs as part of the PIP invited international exhibition program. But back to the chase! BETA 11 presents folios from Swiss based Carlos Crespo, whose work I came across at the Fotofest ‘Meeting Place’ portfolio reviews in Houston back in March. It was at the same portfolio reviews that I also discovered ‘Sisters’, the soft lyrical work of Russia’s Mariya Kozhanova. This issue is rounded off by spreads from home-grown talents, Leon Bird from Perth, and Canberra’s Greer Versteeg.

It was planned to include a selection of mini portfolios from this edition onwards featuring under 25 photographers who are just emerging on their photographic journey. Unfortunately the call appears to have fallen on deaf ears, as we have had very few submissions to date, [it well may be that there is a stack of submissions waiting for me in my inbox when I get back to Oz in a weeks time] So just a reminder to those of you who are under 25, and would like to make a submission. Send ten jpeg files, 2000 pixels on the longest side, in a zipped folder, along with a brief artist statement and a short bio to beta@ballaratfoto.org. The expectation will be that your folio will be well crafted and cohesive. Have a look at previous editions of BETA developments in photography to see the standard of work that may get you a guernsey. We invite submissions from around the world as long as you are under 25. And of course we are always looking for strong bodies of work from well

seasoned photographic practitioners. The specifications are the same as for under 25â&#x20AC;&#x2122;s, except we require between 20 to 30 images for consideration. We donâ&#x20AC;&#x2122;t offer critiques or feedback on submissions, but if we like what we see we will be in touch. So best regards from China, and we look forward to presenting more exciting photography in the Christmas edition of BETA developments in photography 12 sometime in December.

‘Carlos Crespo‘s photographs were created over the past years in the course of research trips to the Badain Jaran desert. Crespo set out on a journey through a region of our planet that until now for political and other reasons - has virtually never been artistically explored. At a time of incomprehensibly complex decryption and insight in such fields as genetics and astronomy, it is astonishing to hear something like this about our planet; but fact is that there still are many gaps in our knowledge of the Earth‘s geopgraphy.’ Cathérine Hug, Curator Kunsthalle Wienna/ Kunsthaus Zürich Wien 2013

‘It is in this atmosphere that Carlos Crespo’s photographic researches are valuable as documents of a disappearing world. Like the great photographers of the American West between the 1880s and the early part of the 20th century, men such as Timothy O’Sullivan, Alexander Gardener, and Edward S. Curtis, Crespo has photographed both the epic landscape and the people living in a world changing before their eyes. The last herdsmen of the Badain Jaran desert stand before eternity, surrounded by constructions sprouting from those grains of sand that defined their lives. We must thank Carlos Crespo for bringing back an historically important body of work in the form of this beautiful document of images.’ Bill Kouwenhoven, Editor New York, 5 April 2013 website: carloscrespo.com

â&#x20AC;&#x153;Cherry in vernal glory but blossoming is not eternal - and fewer flowers remaining every new dawn for me in this frail world...â&#x20AC;? - Kagawa Kageki

Two Sisters is a poetic story about youth at its most powerful and fragile stage. Just like the change of seasons, we could not stop the way of growing up. The beauty of this moment and fragility is fascinating and annoying in the same time. Pure innocence of beliefs and thoughts are intertwining with new desires as they become powerful temptations. The perfect world is becoming too tight and restricted. Unconsciousness is giving permission to break through the vulnerable stage of pure beauty.

Mariya Kozhanova is representing a style of female photography best understood through sensibility, fragility, and aesthetics. She is showing the fragility and hidden beauty in our world by catching something that surrounds us every day, but needs to be carefully discovered. Those moments known from our everyday discoveries are photographed with a sensible female perspective. Her photography may be associated with storytelling or poem-writing, rather than documenting a truly fact-based moment. Mariya is understanding female beauty with the perspective of a woman. This can be felt by the way she is seeing and capturing emotions. She likes to work with photography, because of the way how it reflects the world around us. For her, it singles out the main essence of life, because the most important thing are not the facts that are in a photo, but it matters for Mariya what you are looking at and what emotions you are starting to see. website: mariyakozhanova.com

A lifetime fascination with industrial marks and scratches has led me to produce this body of work. The images are the result of observations in many varied workplaces both in Australia and abroad, and reflect the colours and textures often camouflaged within an otherwise drab industrial landscape.

Leon Bird has worked as a commercial photographer and graphic designer for over forty years. He studied Graphic Design at Curtin University in Western Australia and went on to practice both Graphics and Photography. His photographic work covers many fields and has a strong reputation in the area of food and beverage. He has won many awards in his career, with one of the more notable being The Australian Fuji Professional Photography Award.

This work is from an exhibition I called The Dew Point. The Dew Point is a meteorological term for the atmospheric condition in which air meets surface and becomes water. At the Dew Point, one element touches another to create something wholly new, or reinvented. Much of this work looks at the symbolism of water: the feminine; the unconscious mind; the mystery of the unknown and the mystery of the deeply known or intuited, of transmutation and renewal.

This collection is predominantly made up of analogue photographs. It includes work created with a variety of cameras and films, and employs techniques such as Polaroid image transfer. I enjoy the less predictable outcome of these methods – the sense of anticipation as the negative is lifted from the paper. I’m rarely seeking perfection in these pieces, it’s the ‘accidental magic’ that thrills me.

Greer Versteeg is a photographer who has worked in fine art and performance. She has exhibited and had work publish ed in Australia, the US and QuĂŠbec, Canada. Though influenced by contemporary photographers such as Francesca Woodman, Saul Leiter, Roger Ballen and Robert & Shana Parke Harrison, she is more likely to be found gazing at abstract paintings than photographs. Greer lives and works in Canberra with her Great Dane, a fridge full of peel-apart film and a small, evil cat.