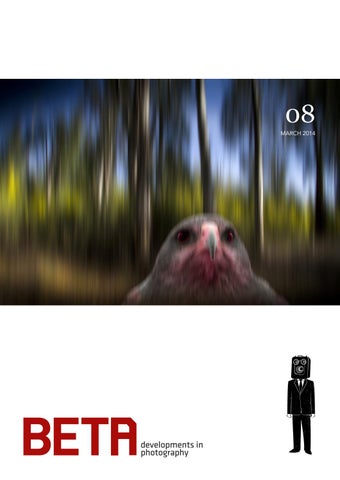 BETA developments in photography ISSUE 08 editor: Jeff Moorfoot design: Penelope Anne contact: beta@ballaratfoto.org web: beta.org.au All content in this magazine is ÂŠ 2014 of the Ballarat International Foto Biennale and participating artists, and may not be reproduced without the express written permission of the BIFB. Inc save for fair dealing for the purposes of research, study, criticism, review, reporting news. All other rights are reserved.

Steve Marshall WE, THE ARMENIANS

Welcome to edition 08 of BETA developments in photography, where we continue to mirror the same diversity of content that underpins and drives the Ballarat International Foto Biennale. We kick of 08 with an artist from North Carolina, USA. Neil Craver’s ‘Omni Phantasmic’images are a selection from a larger body of work, featuring underwater nudes. What sets these images apart from the many other examples of the genre, for me, is the stage on/in which these flights of fantasy are performed. The disused quarry in that Craver uses as a venue in which to present his underwater ballet brings an uneasiness, and a sense of impending danger and foreboding to the images that would not be out of place in a David Lynch movie. Says Craver, “The nexus of contingents between drowning and floating, falling and flying, dying and living are some of the main unphysical-intangible themes in this series” Ever conscious of being accused of ‘looking after one’s own’, I buck the

trend this issue with Steve Marshall’s ‘We, the Armenians’. For those of you who don’t follow the machinations of the Ballarat international Foto Biennale in close detail, Steve has just been appointed to the position of Executive Director of the BIFB. He brings to the position a lengthy and distinguished background in events administration, but it is also paralleled with a similar history as a commercial documentary photographer. So what better way to introduce Steve than to showcase his latest body of work, ‘We, the Armenians’, shot late last year as part of a larger project on Armenia. I was just recently flagged about Melbourne’s Tony Jackson and his series ‘Forest Kaleidoscope’ and I am really enjoying the territory he covers between reality and abstraction. These images mirror my own personal environment, nestled on the edge of the Wombat State Forest, with resident populations of crimson rosellas, gang gang cockatoos and galahs, whose exotic flashes of colour strobe against the surrounding trees. His exaggerat-

ed vertical representations of the muted colours of the Australian bush are delightfully contrasted with the depiction of brightly coloured native birdlife traversing the frame. And to round out this, our eighth edition of BETA developments in photography, we present ‘Chromomania’ a series of quiet, after dark observations of the city of Canberra from Michael Masters. I am just about to head off to America’s oldest and biggest festival of photography, FotoFest, in Houston Texas, where I have been invited to review portfolios at the biggest such event in the world – the FotoFest ‘Meeting Place’. I will be just one of the approximately 160 reviewers who will see work presented by over 500 photographers from all around the planet. During my four days at the Meeting Place I will meet and review the folios of around sixty artists, so I predict that discoveries from the FotoFest will predominate Issue 09 of BETA developments in photography, due

for release sometime around May/ June. But as always, I am interested in viewing submissions for consideration from all sources at home and abroad at any time. Visit our BETA website beta.org.au for submission details. And on a closing note, we have just appointed a new editor for our BIFB sister publication ONE THOUSAND WORDS [about photography] Mike Lim hails from Adelaide and invites submissions from anyone who writes on photography for possible inclusion in upcoming issues. You can contact Mike at 1000words@ballaratfoto.org

This photographic series is a visual voyage of metamorphosis into the subconscious waters of the mind. The ultimate metaphysical quest into the undercurrent of consciousness.

Neil Craver quickly became mesmerized by the creation process as a young boy. Beginning as an abstract painter and figurative sculptor, his motivation grew from an interest in chroma and psychophysical effects of these stimuli acting upon his five known senses. His creations are the exploration of his inner facilities; in the pursuit of knowledge expressing “original thoughts”. Photography holds all the intrinsic values of all the other arts but differs in the fact that it’s the foundation of existence. “Nothing can exist without the photon; every aspect is controlled by it’s usage.” website: omni-phantasmic.com

a collaboration of festivals of photogr

raphy from asia, oceania and the pacific rim

We, The Armenians STEVE MARSHALL

In the landlocked area of the South Caucasus region of Eurasia is the small but old country of Armenia. Surrounded on all sides by a disparaging array of political doctrines, Armenia is the one country in the world that could be worried about both its geographical and geopolitical position. Armenia is bordered by its allies, Iran and Georgia, and its foes, Turkey and Azerbaijan. Not that far away are the troubled countries of both Syria and 30

Iraq. To add weight to this precarious position is the fact that Armenia is politically and economically aligned to Russia. So what of the Armenians? Who are they and what are they like? On a recent trip through that country, I managed to photograph the people as they are in their environment, going about their daily routines amidst the turmoil of the modern world. The Armenians are not unfamiliar with their lot, they

are a unitary, multi-party, democratic nation-state with an ancient cultural heritage. The Kingdom of Armenia was established in the 6th century BC, after the fall of Urartu and became the first state in the world to adopt Christianity as its religion. It has endured the rule of the Mongol, the Ottoman and the Russian empires. The predominant religion in Armenia is Christianity. The roots of the Armenian Church go back to the 1st century.

Tony Jackson feels at times he was born in a forest. This environment resonates deeply in his emotions – the colours and various moods of the forest; the unknown eyes watching; as well as the variety and textures of the plants and creatures and the mysterious depth of space. Life, death, and renewal all occur within the forest landscape.

In this series of images the photographer explores the colours, vibrancy and moods. His experience of life informs him that clarity can be an elusive state and he now feel that life might sometimes be better without it. These images celebrate this aspect and allow the viewer’s own emotions to permeate these forests – colour is the mechanism to transport one into this world of wonder.

The Melbourne-based photographer and architect Tony Jackson says that he has been taking photographs for as long as he can remember. However, it was only recently that he plucked up the courage to pursue photography professionally. His recent solo exhibitions in Melbourne and around Victoria were favourably received, and earned him an invitation to participate in curated group shows at Photonet Gallery in Fairfield, 78

Quadrant Gallery in Hawthorn, and Serigraph Gallery in Neerim South. He was also among the finalists in the recent Evergreen and New North / Photonet photography prizes. His works now grace private and corporate collection in Australia and overseas; and a number of his images were added to the Getty Image Archive. website: www.quadrantgallery.com.au/tony-jackson.html

In today’s world our eyes don’t need to adjust to the dark. At night, as Canberra’s residents sleep, artificial light subjugates the darkness and surrounds objects and forms with colour.

Chromomania explores the interaction between colour, shapes and forms that are present in Canberra’s urban environment at night. Using long exposures, images are created that capture the reflections of light on glass, the spread of light across concrete and brick, and the cast of silhouettes and shadows.

Michael Masters is a photographer based in Canberra, Australia and is currently pursuing a range of photographic practices including freelance commercial, documentary and conceptual photography. In 2013 he was commissioned to produce images for the Centenary of Canberra â&#x20AC;&#x2DC;Documenting the Commissionsâ&#x20AC;&#x2122; photography project. As part of this important project he worked with artists, athletes, musicians and the public to document their vision and celebration of an important milestone in the history of Australiaâ&#x20AC;&#x2122;s capitalcity. He finds satisfaction in producing strong images that communicate the essence of people, objects and the environment in which we live.