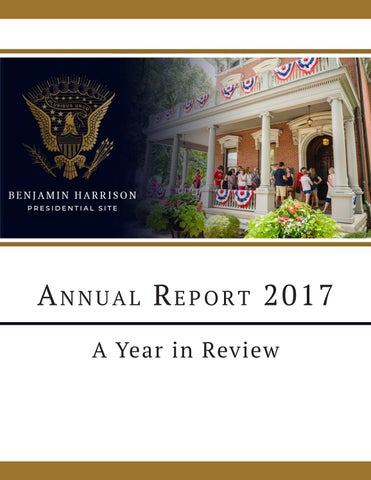 M I S SI ON The mission of the Benjamin Harrison Presidential Site is to share the life stories, arts and culture of an American President to increase public participation in the American system of self-government.

A LETTER FROM THE PRESIDENT Thousands of school children every year come to the Benjamin Harrison Presidential Site to better understand the legacy of an American president who personally dedicated himself to public service, and embodied many of the highest traits of leadership. Not only did Benjamin Harrison establish the national forests, but he also promoted the adoption of the pledge of allegiance and started the tradition of flags being flown in front of schools and public buildings. He was outspoken in his advocacy for African-American civil rights, doing right by our veterans, protecting the rights of business owners against monopolies, and the importance of a two-ocean navy for national defense. These signal accomplishments are worth celebrating-and sharing. To think about each of those students one by one by one-as young citizens looking for direction-getting to visit the home of a US president, it reminds me of how truly exceptional this place is. They are exploring, absorbing, and experiencing a place of both local relevance and national significance that will positively influence their futures. We're doing important work together, and this year exemplifies the bright opportunities we have yet before us. Our In Pursuit of State Pride initiative has served thousands of economically-challenged students from across Marion County, meeting over 30 state education standards in a one day field trip and giving them access to historic resources otherwise outside their school's budgets. Future Presidents of America youth leadership camp continues to build individual confidence, civic literacy, and good citizenship by engaging students in a series of lectures, debates, and hands-on encounters with United States culture and history-and it has an opportunity in the coming year to become a national model of success. The new Harrison documentary, A President at the Crossroads, has aired to hundreds of thousands of households across Indiana and beyond. Our innovative 3D initiative is attracting interest from coast to coast. And programs like the Mary Tucker Jasper Speaker Series continue to raise our national profile. This October at the Advancing American Democracy Awards, Indiana Governor Eric Holcomb said: "By sharing the remarkable stories of our country's past, our youngest citizens are better prepared for its future. The Benjamin Harrison Presidential Site bears this torch for good citizenship like no other, helping light the fire in the hearts of a new generation." Thank you for your past support in 2017. We will continue to do our part to lay cornerstones for solid foundations, and provide a new generation of students with the enhanced educational experiences that will "light the fire" in their hearts. Very sincerely yours,

â&#x20AC;&#x153;The legacy of Harrison is important because there arenâ&#x20AC;&#x2122;t many examples of unselfish leaders.â&#x20AC;? __Stan Hurt, Honorary Board of Directors

FUTURE PRESIDENTS OF AMERICA In June, we welcomed the 2017 class of Future Presidents of America. Over the course of five days, they impressed us with their creativity and tenacity. This is one example of the fine thinking and perspective these young leaders brought to their experience.

Under the green grass And in the dirt Our fine General Harrison Has become part of our earth But please do not mourn his loss For celebrate instead Celebrate the life he gave us Celebrate the citizens he made us Celebrate the person that led us Who now lays on his on his death bed He fought as a general He fought for the North And though we struggled through times He continued to move us forth He also served as president And he gave us great ideas In Indiana he was resident Where he began showing us, the person he is So as our legacy and in our mind General Harrison led us up until his time He was a legacy and led us all He watched us build up and watched us fall He gave us hope and a place to call home He took our country and made it our own

The Presidential Pets exhibit takes over the ballroom!

The Independence Day Social was filled with ice cream and patriotic fun!

YEAR AT A GLAN CE

Carrying on the tradition, the home was beautifully decorated for Christmas.

â&#x20AC;&#x153;I am an ardent believer in the duty we owe ourselves at Christmas to make merry for children at Christmas time.â&#x20AC;? __President Benjamin Harrison

OUR VOLUNTEE RS We could not accomplish all that we do without the dedication, talent and enthusiasm of our wonderful corps of volunteers. From special events to tours of the home to assisting with collections, our volunteers are essential assets to fulfilling the mission of the Benjamin Harrison Presidential Site.

“I love history, I love to talk, I love people, and the other volunteers are great. There’s not a stinker among them!” __Jan, Volunteer

“Going to other museums, they’re not as personal and the [Benjamin Harrison Presidential Site] is a little closer to their experience.”

A PRESIDENT AT THE CROSSROADS As part of a generous grant from the Indiana Office of Tourism Development and in partnership with WFYI Public Media, a 60-minute documentary on Benjamin Harrison aired October 19, 2017 on WFYI. QUICK LINK: Stream online at http://bit.ly/PresAtXroads

A DVI S OR

Annual Report 2017 A Year in Review 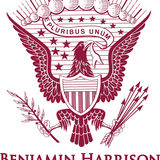