Zoom in on Cape Verde

Cape Verde is situated in the Atlantic Ocean 500 km west of Senegal. The archipelago of Cape Verde has an area of 4,033 km’ and is made up of ten islands (of which nine are inhabited) and nine islets of volcanic origin. it comprises two regions: the Northern Region, called Windward (Sao Vicente, Santo Antao, Sao Nicolau, Santa Luzia, Sal and Boavista), and the Southern Region, called Leeward (Santiago, Fogo, Maio and Brava).

The climate is tropical with two distinct seasons: dry season is from November to June and the rainy season from July to October. The average annual rainfall in coastal areas is 250mm, rising to 600mm in the higher regions.

There are two forms of agricultural practice: dry or pluvial and moist or irrigated. The major crops are beans, cabbage, cassava, maize, sugar cane, sweet potato, and tomato.

On the island of Santiago honeybees are everywhere, especially in the humid valleys. Bees are nesting in house walls, rock terrace walls, in the mountains, in villages and cities, wherever there are flowering plants. DNA analysis by Bo Vest Pedersen (see this edition page 9) has shown that the honeybees in Cape Verde are Closely related to honeybees from The Gambia.

There is an important area in the mountains which is covered with forest plant species of great value for honey production including Eucalyptus spp and Grevillea robusta. |n the coastal areas there are Acacia spp, Aloe vera, Cocos nucifera, Leucaena leucocephala, Musa spp, Parkinsonia aculeata, Prosopis juliflora and Ziziphus mauritiana.

The Cape Verde beekeeping project is a co-operative venture between the Diregao Geral de Agricultura, Silvicultura e Pecuaria (DGASP) in the Cape Verde Ministry of Agriculture, and Danish Bee Consult/EDBI, sponsored by The Danish Ministry of Foreign Affairs (DANIDA).

The project started in September 1999 and will run for three years. Beekeeping in hives started in Cape Verde in 1953 when a farmer imported beekeeping equipment from Portugal. Modern beekeeping in the government context started in 1993 with a Food and Agricultural Organization of the United Nations (FAO) project. Expensive stainless steel equipment was imported and many frame hives produced. Wild bees were found in the mountains of Santiago and transferred to the hives. Colonies of bees were taken to the islands of Fogo and Santo Antao from Santiago in 1995.

Human inhabitants on these islands burnt the colonies and destroyed them with pesticides, unhappy about the introduction of these ‘aggressive insects’.

In 1999 less than ten colonies were left, and only three trained persons from DGASP were working with the bees. This project introduced beekeeping but not in a way that it was feasible for people without money.

For the last ten years it has been an official goal that 3,000,000 trees should be planted on Cape Verde every year and every Cape Verdi an is encouraged to plant at least seven trees every year.

Both the government and especially the NGO Dos Amigos de Natureza have been responsible for the creation of forests with Acacia sp, Prosopis sp, sweet chestnut, Eucalyptus, pine trees and other drought resistant trees. The trees have been planted to create more precipitation to prevent erosion, and to supply people with firewood and food. The trees have grown well although the Acacia and Prosopis produce only a few pods and seeds, probably because of lack of pollination.

The main purpose of the Cape Verde/Danish project has been to create better pollination for the forests, fruit trees and vegetables and to create a new income-generating activity for poor farmers.

The goal is to educate, and encourage eighty people to start beekeeping, half of the group are women.

All the beekeeping materials are to be made locally and only indigenous bees are used. Bees currently populate seventy hives and half of the students have received bees.

A minor part of the project has been multiplicationof seedlings and cuttings of drought-resistant plants, for example jojoba. This has been in co-operation with

Dos Amigos de Natureza on the Island of Mindelo. The resulting trees will be given to people who want to improve the environment.

Luigi Passoni writes, “Over the last few months | have been astonished to see so many swarms, and was even more astonished to see the mass killing of bees when honey harvesting time arrived. Men and boys go hunting and when they find a nest of bees they set fire to it to chase the bees away. Most of the nests are destroyed. From the previous FAO project we have over 100 unused Dadant hives complete with frames and supers. In the current project we are simplifying these hives: using top-bars in place of frames. We are also using hives that have been made locally”.

It is not well known in Cape Verde that beekeeping can be a profitable activity for rural people, providing crops of honey and beeswax with relatively small investments. The project wants to encourage beekeepers to benefit well from their beekeeping activities by using honey and wax to make other products: candles, pomades, lipsticks and a variety of skin creams.

If weather conditions are favourable horticulture and fruit production are activities that provide a good return, meeting the increasing demands from the growing populations. Unfortunately in attempts to increase the production of their crops, farmers wrongly use chemicals, fertilisers and pesticides, unaware of the damage that these products cause to the environment. 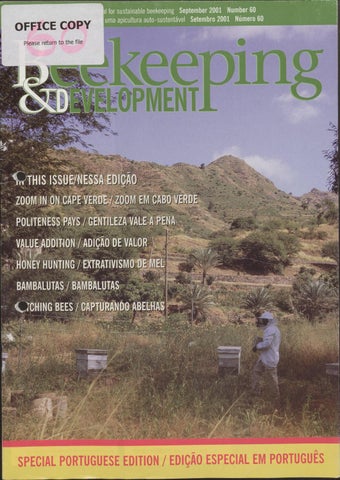