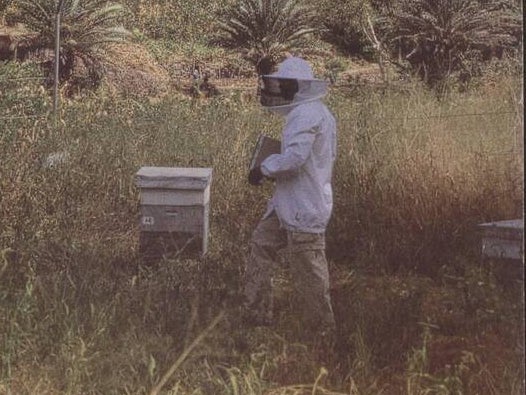 This is the third article in the series bringing news about the ‘Indigenous Honeybees of the Himalayas’ beekeeping project at ICIMOD in Kathmandu, Nepal. The project is Austrian Government funded and managed jointly by Austroprojekt GmbH in Vienna and ICIMOD.

For centuries poor farmers in the Himalayas have earned their livelihoods by harvesting medicinal herbs and other forest products.

Their agricultural systems are dependent on, and integrated with, the management of wild honeybee populations. At present the farmers are facing problems as the productivity of both farms and forests is decreasing because of the disappearance of honeybees and other pollinators.

The decrease in wild honeybee populations is attributed to habitat and climate change. This trend is placing pressure on the populations in the high altitude mountains of the Hindu Kush- Himalayan region, by depriving valuable mountain flora of pollination services.

Ruthless honey hunting practices are another contributing factor to the decline in populations of the Himalayan ‘giant’ honeybee Apis laboriosa. Honey hunting is a traditional activity for mountain tribes. It was never previously a factor in honeybee population decline, because honey hunters always harvested honey keeping continuity in mind: every year they left a few strong nests unhurt on each cliff. An increasing influx of mountain tourists, who are interested in honey hunting and who are equipped with mountain climbing gear, has had a negative impact on populations of Apis laboriosa in Nepal.

Another factor in this serious situation is the regulatory mechanism followed by government agencies responsible for issuing licenses to contractors for honey and wax collection.

These contractors are not only depriving honey hunters of their traditional harvest but are also responsible for the decline in Apis laboriosa populations. Neighbouring villages always owned honey cliffs, so they were regarded as common property, but now government departments have imposed their ownership on these important and valuable indicators of biodiversity. Ownership change has led to mismanagement, greed and overexploitation of this important resource.

This change in the honeybee biodiversity is also having an impact on the socio-cultural environment of honey hunting communities. The impact is significant in terms of spiritual values, gender relationships and the indigenous knowledge base. According to studies of nine honeybee nesting sites in the Ghandruk and Ghachowk areas of Kaski District, 202 colonies were occupying the honey cliffs in 1986 and now there are only 60 colonies occupying five nesting sites; four nesting sites are absolutely deserted.

ICIMOD’s project is building on the capacities of honey hunters, mountain beekeepers, women entrepreneurs, and mountain-based research and development institutions to reverse the impact of these negative changes. This project is assisting mountain people to conserve their bee populations, which will ultimately conserve their plant and animal biodiversity, as well as their priceless cultural heritage.

ICIMOD is The International Centre for Integrated Mountain Development, an international organisation devoted to the development of the Hindu Kush Himalayan region. Read more about ICIMOD at www.icimod.org.np

The Himalayan Kingdom of Nepal is blessed with a variety of climates and provides habitat for four species of indigenous honeybees: Apis cerana, Apis dorsata, Apis florea and Apis laboriosa, and one exotic bee species Apis mellifera.

On 9 August 2001, 12 hybrid Buckfast queens were brought to Kathmandu from the USA. On hearing this news doubts are being expressed as to whether this bee will survive well and produce more honey than the indigenous bees. There is also concern as to who will benefit. Is it the poor farmer beekeepers or the commercial farmers and big companies? The Government of Nepal and other people need to be aware of all the possible shortcomings.

THE FULL TITLE OF THE PROJECT AT ICIMOD IS

‘Indigenous Honeybees of the Himalayas: A Community-based Approach for Conserving Biodiversity and Increasing Farm Productivity’

The major aim of the project is to promote sustainable management of Apis cerana, and of other indigenous honeybees that can be adopted by the communities in the Hindu Kush-Himalayan region, as a contribution towards the conservation of biodiversity, improvement of farm productivity, and increase in farm income.