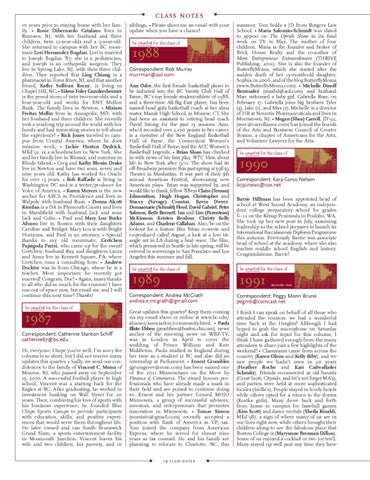 class notes 10 years prior to staying home with her family. • Rosie Dibernardo Catalano lives in Rumson, NJ, with her husband and three children, twin 12-year-olds and a 9-year-old. She returned to campus with her BC roommate Lori Hernandez Bogdan. Lori is married to Joseph Bogdan ’87; she is a pediatrician, and Joseph is an orthopedic surgeon. They live in Spring Lake, NJ, with their three children. They reported that Ling Chiang is a pharmacist in Toms River, NJ, and that another friend, Kathy Sullivan Recny, is living in Chapel Hill, NC. • Eileen Foley Gundersheimer is the proud mom of twin two-year-olds and a four-year-old and works for BNY Mellon Bank. The family lives in Newton. • Miriam Freitas Mellin lives in Annapolis, MD, with her husband and three children. She recently took a yearlong trip around the world with her family and had interesting stories to tell about the experience! • Rick Jones traveled to campus from Central America, where he does mission work. • Jackie Haxton Dedrick, MEd’91, is a schoolteacher in New York. She and her family live in Wassaic and summer in Rhode Island. • Greg and Kathy Blouin Drake live in Newton and have two sons, seven and nine years old. Kathy has worked for Oracle for over 15 years. • Rob Raffaele is living in Washington DC and is a writer/producer for Voice of America. • Karen Meyers is the new anchor for ABC6 in Providence and lives in Walpole with husband Russ. • Donna Alcott Riordan is a DA in Plymouth County and lives in Marshfield with husband Jack and sons Jack and Colin. • Paul and Mary Lou Burke Afonso live in Boston with their daughters Caroline and Bridget. Mary Lou is with Bright Horizons, and Paul is an attorney. • Special thanks to my old roommate, Gretchen Papagoda Parisi, who came up for the event! Gretchen, husband Ray, and daughters Laura and Anna live in Kennett Square, PA, where Gretchen runs a consulting firm. • Andrew Docktor was in from Chicago, where he is a teacher. More important: he recently got married! Congrats, Doc! • Again, many thanks to all who did so much for the reunion! I have run out of space now, but email me and I will continue this next time! Thanks! be

Correspondent: Catherine Stanton Schiff catherine87@bc.edu Hi, everyone. I hope you’re well. I’m sorry the column is so short, but I did not receive many updates this quarter. • Sadly, we send our condolences to the family of Vincent C. Munn of Monroe, NJ, who passed away on September 15, 2010. A successful football player in high school, Vincent was a starting back for the Eagles at BC. After graduating, he worked in investment banking on Wall Street for 20 years. Then, combining his love of sports with his business experience, he founded Blue Chips Sports Camps to provide participants with education, skills, and positive experiences that would serve them throughout life. He later owned and ran South Brunswick Grand Slam, a sports entertainment facility in Monmouth Junction. Vincent leaves his wife and two children, his parents, and 10

siblings. • Please shoot me an email with your update when you have a chance! be

Correspondent: Rob Murray murrman@aol.com Ann Odoy, the first female basketball player to be inducted into the BC Varsity Club Hall of Fame, BC’s top female student-athlete of 1988, and a three-time All-Big East player, has been named head girls basketball coach at her alma mater, Masuk High School, in Monroe, CT. She had been an assistant to retiring head coach David Strong for the past 13 seasons. Ann, who’d recorded over 2,100 points in her career, is a member of the New England Basketball Hall of Fame, the Connecticut Women’s Basketball Hall of Fame, and the ACC Women’s Basketball Legends. • Brian Sloan has checked in with news of his first play, WTC View, about life in New York after 9/11. The show had its off-Broadway premiere this past spring at 59E59 Theater in Manhattan. It was part of their 5th annual Americas Festival, showcasing new American plays. Brian was supported by, and would like to thank, fellow ’88-ers Claire (Tevnan) Edmondson, Hugh Hogan, Christopher and Stacey (Savage) Constas, Kevin Dwyer, Donnamarie (Schmitt) Floyd, David Gabriel, Peter Salmon, Beth Burnett, Ian and Lise (Parenteau) McKinnon, Kristen Brodeur, Christy Kelly Adams, and Charlene Callahan. Also, be on the lookout for a feature film Brian co-wrote and co-produced called August, a look at a love triangle set in LA during a heat wave. The film, which premiered in Seattle in late spring, will be entered in screenings in San Francisco and Los Angeles this summer and fall. be

summer. Tom holds a JD from Rutgers Law School. • Maria Salomão-Schmidt was slated to appear on The Oprah Show in its final week on TV in May. The mother of four children, Maria is the founder and broker of Brick House Realty and the co-author of Mom Entrepreneur Extraordinaire (THRIVE Publishing, 2011). She is also the founder of ButterflyMoms, which she started after the sudden death of her 13-month-old daughter, Sophia, in 2006, and of the blog ButterflyMoms (www.ButterflyMoms.com). • Michelle Dinoff Bermudez (mashd@aol.com) and husband Marc welcomed a baby girl, Gabriella Rose, on February 17. Gabriella joins big brothers Tyler (3), Jake (1), and Max (1). Michelle is a director of HR at Novartis Pharmaceuticals and lives in Morristown, NJ. • Megan (Shea) Carroll, JD’92, (mec@carrollassoc.com) has joined the boards of the Arts and Business Council of Greater Boston, a chapter of Americans for the Arts, and Volunteer Lawyers for the Arts. be

Correspondent: Kara Corso Nelson bc90news@cox.net Barrie Hillman has been appointed head of school at West Sound Academy, an independent college preparatory school for grades 6–12 on the Kitsap Peninsula in Poulsbo, WA. She took up her new post in July, assuming leadership as the school prepares to launch its International Baccalaureate Diploma Programme this autumn. Previously Barrie was associate head of school at the academy, where she also teaches middle school English and history. Congratulations, Barrie! be

Great updates this quarter! Keep them coming via my email above or online at www.bc.edu/ alumni/association/community.html. • Paula Blute Ebben (pmebben@boston.cbs.com), news anchor of the morning news on WBZ-TV, was in London in April to cover the wedding of Prince William and Kate Middleton. Paula studied in England during her time as a student at BC and also did an internship at Parliament. • Ernest Grumbles (grumgreev@msn.com) has been named one of the 2011 Minnesotans on the Move by Finance & Commerce. The award honors professionals who have already made a mark in their field and are poised to continue doing so. Ernest and his partner formed MOJO Minnesota, a group of successful advisors, investors, and entrepreneurs that promotes innovation in Minnesota. • Tomas Simon (nomisto@gmail.com) recently accepted a position with Bank of America as VP, tax. Tom joined the company from American Express, where he served for almost nine years as tax counsel. He and his family are planning to relocate to Charlotte, NC, this

I think I can speak on behalf of all those who attended the reunion: we had a wonderful time back at the Heights! Although I had hoped to grab the microphone on Saturday night and ask for input for this column, I think I have gathered enough from the many attendees to share just a few highlights of the weekend! • Classmates came from across the country (Karen Olson and Kelly Biby), and we saw people we hadn’t seen in 20 years (Heather Roche and Kari Cadwallader Schmitz). Friends reconnected at old haunts (Great Scott, Cityside, and let’s not forget MA’s), and parties were held at more sophisticated locales (Stella’s). People stayed in lovely hotels while others opted for a return to the dorms (Kostka girls). Many drove back and forth from home to campus for baseball games (Kim Scott) and dance recitals (Sheila Rinaldi, MEd’98), a sign of where many of us are in our lives right now, while others brought their children along to see the fabulous place that Boston College is (Maryanne Brennan Dillon). Some of us enjoyed a cocktail or two (or ten!). Many stayed up well past any time they have 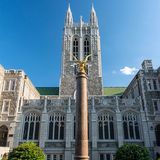 Boston College Magazine is published quarterly by Boston College, with editorial offices at the Office of Marketing Communications.

Boston College Magazine is published quarterly by Boston College, with editorial offices at the Office of Marketing Communications.