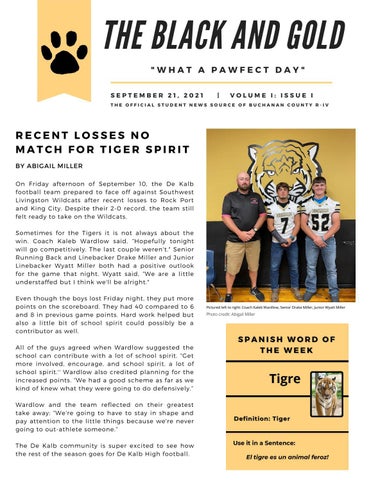 VOLUME I: ISSUE I

RECENT LOSSES NO MATCH FOR TIGER SPIRIT BY ABIGAIL MILLER On Friday afternoon of September 10, the De Kalb football team prepared to face off against Southwest Livingston Wildcats after recent losses to Rock Port and King City. Despite their 2-0 record, the team still felt ready to take on the Wildcats. Sometimes for the Tigers it is not always about the win. Coach Kaleb Wardlow said, “Hopefully tonight will go competitively. The last couple weren&#39;t.&quot; Senior Running Back and Linebacker Drake Miller and Junior Linebacker Wyatt Miller both had a positive outlook for the game that night. Wyatt said, “We are a little understaffed but I think we&#39;ll be alright.&quot; Even though the boys lost Friday night, they put more points on the scoreboard. They had 40 compared to 6 and 8 in previous game points. Hard work helped but also a little bit of school spirit could possibly be a contributor as well. All of the guys agreed when Wardlow suggested the school can contribute with a lot of school spirit. “Get more involved, encourage, and school spirit, a lot of school spirit.&#39;&#39; Wardlow also credited planning for the increased points. “We had a good scheme as far as we kind of knew what they were going to do defensively.” Wardlow and the team reflected on their greatest take away: “We&#39;re going to have to stay in shape and pay attention to the little things because we&#39;re never going to out-athlete someone.” The De Kalb community is super excited to see how the rest of the season goes for De Kalb High football.

SPANISH WORD OF THE WEEK

Use it in a Sentence: El tigre es un animal feroz!

The Middle School football team has had a rough season. Despite the lack of players, and play time in games, they have still been practicing and going hard. For other teams, it would be hard to stay motivated but the boys keep pushing. This push doesn’t come without concerns though. Seventh grader Tanner Graber said, “It’s kind of scary not knowing if you’re wasting your time in practice or not.” But, Tanner said “There’s always next year.” Coach Roberts and the team all help motivate each other. Tanner says “They say &#39;Keep going.&#39;&quot; Seventh grader Devlen Cline says “They all keep each other up.&quot; Without teammates and motivation from the coach, it wouldn’t be easy to

want to go to practice. Connor Graber says going to practice and not playing isn’t ideal and fun, but his parents also help keep him motivated. The 7th grade boys also look up to the 8th graders as inspiration. Tanner says “I look up to my brother (Connor Graber) and Bode Griffin because they’re good players.” The continuing of practice paid off when the middle school boys played their first game on September 12th. Without the motivation and help of parents, teammates, and Coach Roberts, it wouldn’t be easy. Without the determination and spirit of the middle school boys, it wouldn’t be possible.

MRS. T&#39;S BOOK OF THE WEEK We all have teachers who never quit reading, and for De Kalb, one of those teachers is Mrs. Taylor. If you go into her classroom, you’ll always see her either teaching or reading. This week she is reading The Outsiders by S.E. Hinton. Mrs. Taylor says “I have read this book approximately 70 times, but as of right now I am only on chapter 3.” When asked if she would recommend this book to other readers she said, “Yes because the book was written 50 years ago, but the theme of the book still applies to today.” Mrs. Taylor also wanted to add “If you haven’t read The Outsiders, then you’re really missing out on life.”

BAND MEMBERS NEW AND RETURNING MAKE MEMORIES ON THE FIELD BY MEKAYLA BOYDSTON Sophomore Jayden Schneider and middle schooler Sidnie Nance, both members of the De Kalb Tigers marching band enjoy being in the marching band for the fun and the unforgettable memories. Jayden Schneider who is this year&#39;s drum major and has been in band since fifth grade says “Being in band includes fun, memorable memories, and sometimes disaster.” According to multiple band members, the worst disaster so far was the famous band dog deciding to use the bathroom on the football field during the national anthem.

Sidnie Nance, the band&#39;s only baritone player, just joined the band this year. Sidnie says, “The first game I’ve been to was the best, helping the band get ready.” Even though Sidnie is new and Jayden has been in band for years, they both have similar opinions about marching band this year. Jayden says, “We’re doing pretty well so far,” while Sidnie says, “It has been tiring but interesting.” It is amazing to see how new and returning members of the band have similar opinions and views of the De Kalb Tiger Band.

Quote of the week brought to you by Mrs. Miller:

When most people see cops, their first instinct is to slow down or go the other direction, but at De Kalb it is a lot different with Officer Scott Vanover, our School Resource Officer who has been here for seven school years including this year. Freshman Tricia Simpson said, “I see him as a really nice cop. He treats us more like a family.&quot; When asked what his first job was, Vanover recalled, “My first job would have been I worked in a grocery store, and I started off being a stocker. I was eventually promoted to cashier, and then I was promoted to a supervisor. And that was all in high school.” Vanover also recalled, “I got interested in Law Enforcement in 1989. My friend who I graduated high school with was a few years older than me. They asked me to do a ride along and I did a couple ride alongs and after that I was hooked. And I went into law enforcement.” Vanover continued, “This will be my 7th school year here at De Kalb. Altogether I’ve been in law enforcement for 32 years.” Vanover has made many positive memories here at De Kalb. “Probably the best memory I have is I get to mentor and build relationships with the students here. And that ultimately turns into friendships, and the students here at De Kalb can come to me and ask questions anytime. One of the most rewarding parts is seeing students graduate and become adults, being able to go through college and being succesful.” Vanovers recalls that &quot;De Kalb is very similar to the school I went to. I graduated from Savannah High School, which is a farming community so there is alot of similarities. Savannah is a little bit bigger than De Kalb but, overall, it&#39;s very similar. There is a wide variety of student life. We have kids who are in age, we have kids who are sport oriented, but yeah, there is a very broad spectrum of kids here at De Kalb,” Vanover replied. 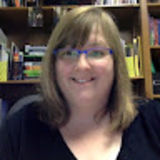