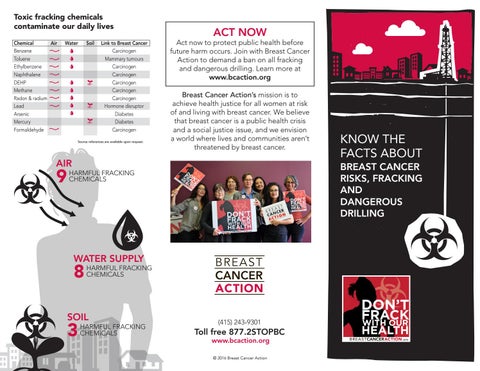 Source references are available upon request.

Act now to protect public health before future harm occurs. Join with Breast Cancer Action to demand a ban on all fracking and dangerous drilling. Learn more at www.bcaction.org Breast Cancer Action’s mission is to achieve health justice for all women at risk of and living with breast cancer. We believe that breast cancer is a public health crisis and a social justice issue, and we envision a world where lives and communities aren’t threatened by breast cancer.

KNOW THE FACTS ABOUT

Nearly a quarter of a million women are diagnosed with invasive breast cancer every year, and 90-95 percent of them have no family history of the disease. In fact, a majority of women diagnosed with breast cancer have no known risk factors. Research shows, however, that exposure to multiple chemicals on a daily basis from many different sources is likely to increase our risk of developing breast cancer. Almost 1.7 million active oil and gas wells in the U.S. expose over 15 million Americans who currently live within a mile of an active fracking well. Serious health risks are linked to the toxic chemicals used in fracking and other methods of dangerous drilling, including asthma, lung disease, diabetes, heart disease, reproductive damage, and breast cancer. In fact, carcinogens specifically linked to breast cancer, such as benzene and toluene, have been found in drinking water near gas wells at levels that are four times the legal limit. Fracking is an inherently dangerous process that cannot be done safely.

Why are we at risk? Fracking and dangerous drilling is happening near homes, schools, agricultural fields, and outdoor recreational spots. We may not be able to see, smell, or taste toxic fracking chemicals, yet they pollute the water that we drink, get carried by breezes in the air we breathe, and seep into the soil that grows the fruit and vegetables we eat. In Texas, air sampled at playgrounds near oil and gas wells was found to have high levels of air toxins and carcinogens such as benzene.

OF THOSE CHEMICALS ARE LINKED TO CANCER

CAUSE NERVOUS, IMMUNE AND CARDIOVASCULAR PROBLEMS

Who is at risk? Already vulnerable groups such as low-income communities, people of color, those with existing health issues, and children often live close to drilling sites. For example, 1.8 million Californians live within a mile of an active or new oil or gas well and also live in areas most burdened by other

environmental pollution. Ninety-two percent of them are people of color. Of the almost half a million children (352,784) who live within 1 mile of an oil or gas well, 79.6 percent are predominantly non-white. And itâ&#x20AC;&#x2122;s not just in California. In Texas, newly permitted sites are disproportionately located near communities of color and in high poverty areas. Yet no matter how far or close we live from drilling sites, we are all at risk.

In Pennsylvania, more than 240 private drinking water wells are contaminated because of drilling and fracking operations. A recent U.S. Environmental Protection Agency (EPA) study confirmed cases of drinking water contamination specifically connected to fracking. In California, contaminated fracking wastewater was mistakenly sent directly into protected underground water, poisoning fresh water supplies. Wastewater from drilling also irrigates crops, polluting the soil that grows our food. Fracking and dangerous drilling is creating a legacy of toxic waste for generations to come because the truth is, there is no safe way to dispose of fracking wastewater.

Sources references are available upon request. ** Exact process may vary from state to state, but the health risks are similar.