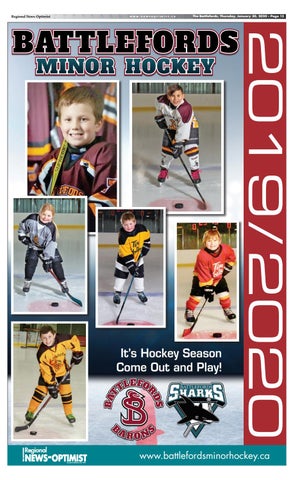 news-optimist Serving the Battlefords since 1908

There are many advantages to having kids participate in team sports such as minor hockey. They learn about teamwork, building trust with their teammates, dealing with stress, and setting goals – all valuable skills that kids need to develop to be successful throughout life and develop life long friendships. Kids active in sports develop confidence and learn how to deal with winning and losing with grace. Research has shown that children who participate in sports perform better in school. Hard work, dedication by players, coaches, parents, officials, volunteers and fans are what make minor hockey in North Battleford such a great success! Best wishes and remember to keep your head up and your stick on the ice.

Mayor’s Message On Behalf of Council and the residents of Battleford, I would like to extend a sincere THANK YOU to the many volunteers who contribute to the success of minor hockey each year. Whether you are a coach, assistant coach, trainer, manager, official or a behind-the-scenes volunteer; I commend you for the support in promoting teamwork and fair play throughout Minor Hockey in Battleford. To the families who brave early mornings, winter weather and cold rinks to cheer on their teams, a huge THANKS. To all the players; continue to play the game you love and remember to always have fun and play fair as each of you are young ambassadors of Battleford whether on the road or at home. Have a great hockey season. Mayor Ames Leslie Town of Battleford

Parents. . . For encouragement in Minor Hockey challenges, sharing in their achievements and celebrating their victories. Minor Hockey players make us all proud. It promotes a healthy, competitive spirit. It strives to increase participation & fair play among athletes. PHOTO CREDIT FOR THE TEAM PHOTOS

Thanks to Warne Photography, coaches and parents for supplying the team photos.

2019 was amazing year for BMHA with another banner coming in the spring. First off, I want to thank all the volunteers, Coaches and Parents who make hockey possible in the Battlefords. Without the countless hours and many miles on the highway our kids would not have the possibility to become great hockey players as well as fantastic young people. There were too many accomplishments to list though for the first time in over 20 years our Midget AA Team won the Northern Provincial Banner and came within one game of winning the Provincial Title. Congrats to Coach Lee Ulmer, his Staff, the Players, the Parents and many fans that cheered this team on. All teams from initiation to Midget came a long way with their development and the love of the game. Helping again with the development side BMHA hired Trach Power Skating which is run by Jordan Trach who is trainer to many NHL players. Jordan along with Blake Tatchell who is a former BMHA member helped our team from Atom to Midget work on the skating aspect of the game which is the most important part of a hockey player. Thanks also to Travis Harrington for helping with our goalies in all ages and good luck to him as he moves on to be a teacher in Meadow Lake. First Shift program was again awarded to BMHA which is a very successful program for 6 to 10-year olds that want to try hockey. Thanks again to Greg Cameron who year in and year out takes time to train these young players, we had over 40 kids take part. BMHA had to re-apply to SHA this year in order to keep our AA boys’ program, luckily, we were awarded to be the Center of Hockey for AA in the North West region of Saskatchewan. Along with that our AAA Stars team was also kept in the Battefords which is very important for the development of hockey players in our region. Last year BMHA was given the chance to continue on as the Center for AA and AAA Girls hockey in the North west, which has continued to grow again this year. We have added a Bantam AA team for the girls which goes along with the Midget AA program that has run for years. BMHA also has a pee wee girls’ team that is playing other girls’ teams in the area. We are very proud of how the girl’s programs have grown this year and continues to grow. Recently this year BMHA has taken on a new initiative, how to help make our referees better in our community. We have added senior refs to mentor our young officials during the games, this has helped with making our young officials more confident to be able to handle the difficult situations that tend to happen during a hockey game. BMHA would to thank the Junior A Battleford North Stars who have provided Complimentary passes to all BMHA members so they can come out and support their heroes at no cost. I would like to thank Kelly Strain who does all the work behind the scenes at the office for BMHA and has been very important for the successful operation of BMHA. Also, thanks to Kerilee Tady who schedules all the ice for 30 teams for practices and games, along with the refs that we need at all the games. This is a very thankless job with many hours and I personally can not thank Kerilee enough for all of her time. In Closing I would really like to Thank the whole Board of Directors of BMHA that volunteer hundreds and hundreds of hours in order for everyone’s kids to play hockey. Make sure you take time in the early part of this year to get out to one of rinks in the Battlefords as our AA teams move towards playoffs, Provincial teams begin the quest for a provincial title or to watch the future North Stars in the younger age groups play out the season. Visit Battleforsminorhockey.ca for any and all information in regards to games and tourneys in the coming months.

We are proud to be a supporter of MINOR HOCKEY in the Battlefords!

A PROUD SUPPORTER OF MINOR HOCKEY IN THE BATTLEFORDS! DESIGN TO DELIVERY

Serving Battlefords and Area for 40 years

The Battlefords North Stars are proud supporters of the Battlefords Minor Hockey teams, players, coaches & officials & we wish them the best in the rest of their seasons & their development.

Serving the Battlefords since 1908

“A Proud Sponsor of Minor Hockey”

The Security Company of Excellence

MANY MORE IN STORE SPECIALS!