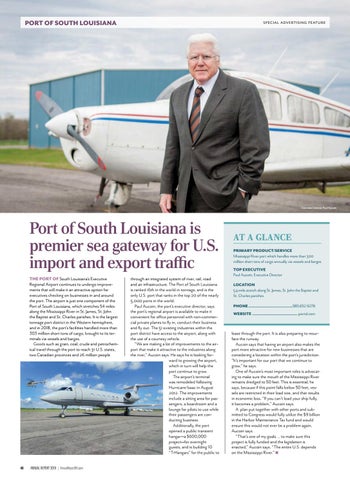 Port of South Louisiana is premier sea gateway for U.S. import and export traffic THE PORT OF South Louisiana’s Executive Regional Airport continues to undergo improvements that will make it an attractive option for executives checking on businesses in and around the port. The airport is just one component of the Port of South Louisiana, which stretches 54 miles along the Mississippi River in St. James, St. John the Baptist and St. Charles parishes. It is the largest tonnage port district in the Western hemisphere, and in 2018, the port’s facilities handled more than 303 million short tons of cargo, brought to its terminals via vessels and barges. Goods such as grain, coal, crude and petrochemical travel through the port to reach 31 U.S. states, two Canadian provinces and 26 million people

through an integrated system of river, rail, road and air infrastructure. The Port of South Louisiana is ranked 16th in the world in tonnage, and is the only U.S. port that ranks in the top 20 of the nearly 5,000 ports in the world. Paul Aucoin, the port’s executive director, says the port’s regional airport is available to make it convenient for office personnel with non-commercial private planes to fly in, conduct their business and fly out. The 51 existing industries within the port district have access to the airport, along with the use of a courtesy vehicle. “We are making a lot of improvements to the airport that make it attractive to the industries along the river,” Aucoin says. He says he is looking forward to growing the airport, which in turn will help the port continue to grow. The airport’s terminal was remodeled following Hurricane Isaac in August 2012. The improvements include a sitting area for passengers, a boardroom and a lounge for pilots to use while their passengers are conducting business. Additionally, the port opened a public transient hangar—a $600,000 project—for overnight guests, and is building 10 “T-Hangars” for the public to

lease through the port. It is also preparing to resurface the runway. Aucoin says that having an airport also makes the port more attractive for new businesses that are considering a location within the port’s jurisdiction. “It’s important for our port that we continue to grow,” he says. One of Aucoin’s most important roles is advocating to make sure the mouth of the Mississippi River remains dredged to 50 feet. This is essential, he says, because if this point falls below 50 feet, vessels are restricted in their load size, and that results in economic loss. “If you can’t load your ship fully, it becomes a problem,” Aucoin says. A plan put together with other ports and submitted to Congress would fully utilize the $9 billion in the Harbor Maintenance Tax fund and would ensure this would not ever be a problem again, Aucoin says. “That’s one of my goals … to make sure this project is fully funded and the legislation is enacted,” Aucoin says. “The entire U.S. depends on the Mississippi River.”