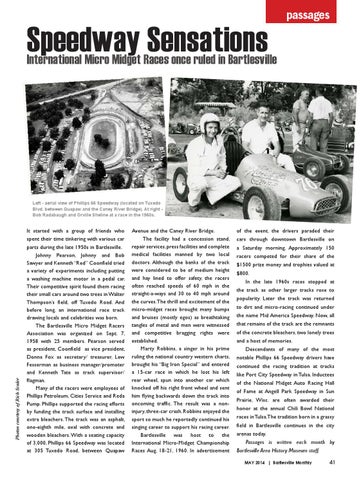 Left - aerial view of Phillips 66 Speedway (located on Tuxedo Blvd. between Quapaw and the Caney River Bridge). At right Bob Radabaugh and Orville Sheline at a race in the 1960s.

It started with a group of friends who spent their time tinkering with various car parts during the late 1950s in Bartlesville. Johnny Pearson, Johnny and Bob Sawyer and Kenneth “Red” Coonfield tried a variety of experiments including putting a washing machine motor in a pedal car. Their competitive spirit found them racing their small cars around two trees in Walter Thompson’s field, off Tuxedo Road. And before long, an international race track drawing locals and celebrities was born. The Bartlesville Micro Midget Racers Association was organized on Sept. 7, 1958 with 25 members. Pearson served as president, Coonfield as vice president, Donna Fox as secretary/ treasurer, Lew Fesserman as business manager/promoter and Kenneth Tate as track supervisor/ flagman. Many of the racers were employees of Phillips Petroleum, Cities Service and Reda Pump. Phillips supported the racing efforts by funding the track surface and installing extra bleachers. The track was an asphalt, one-eighth mile, oval with concrete and wooden bleachers. With a seating capacity of 3,000, Phillips 66 Speedway was located at 305 Tuxedo Road, between Quapaw

Avenue and the Caney River Bridge. The facility had a concession stand, repair services, press facilities and complete medical facilities manned by two local doctors. Although the banks of the track were considered to be of medium height and hay lined to offer safety, the racers often reached speeds of 60 mph in the straight-a-ways and 30 to 40 mph around the curves.The thrill and excitement of the micro-midget races brought many bumps and bruises (mostly egos) as breathtaking tangles of metal and men were witnessed and competitive bragging rights were established. Marty Robbins, a singer in his prime ruling the national country western charts, brought his “Big Iron Special” and entered a 15-car race in which he lost his left rear wheel, spun into another car which knocked off his right front wheel and sent him flying backwards down the track into oncoming traffic. The result was a noninjury, three-car crash. Robbins enjoyed the sport so much he reportedly continued his singing career to support his racing career. Bartlesville was host to the International Micro-Midget Championship Races Aug. 18-21, 1960. In advertisement

of the event, the drivers paraded their cars through downtown Bartlesville on a Saturday morning. Approximately 150 racers competed for their share of the $1500 prize money and trophies valued at $800. In the late 1960s races stopped at the track as other larger tracks rose to popularity. Later the track was returned to dirt and micro-racing continued under the name Mid America Speedway. Now, all that remains of the track are the remnants of the concrete bleachers, two lonely trees and a host of memories. Descendants of many of the most notable Phillips 66 Speedway drivers have continued the racing tradition at tracks like Port City Speedway in Tulsa. Inductees of the National Midget Auto Racing Hall of Fame at Angell Park Speedway in Sun Prairie, Wisc. are often awarded their honor at the annual Chili Bowl National races in Tulsa.The tradition born in a grassy field in Bartlesville continues in the city arenas today. Passages is written each month by Bartlesville Area History Museum staff. MAY 2014 | Bartlesville Monthly

Three great car shows highlight the month, along with SunFest, an OKMozart quick guide, and the Fiore Four - four teen siblings who race cars - plus our Comprehensive May Event Calendar! 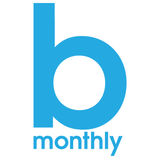