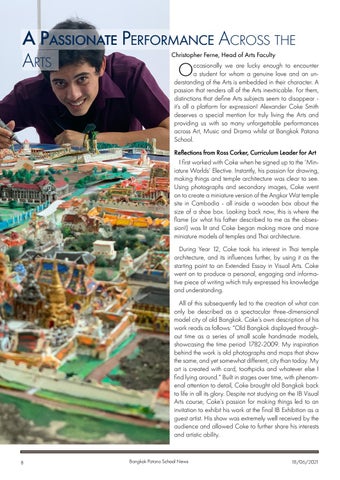 A Passionate Performance Across the Arts O Christopher Ferne, Head of Arts Faculty

ccasionally we are lucky enough to encounter a student for whom a genuine love and an understanding of the Arts is embedded in their character. A passion that renders all of the Arts inextricable. For them, distinctions that define Arts subjects seem to disappear it’s all a platform for expression! Alexander Coke Smith deserves a special mention for truly living the Arts and providing us with so many unforgettable performances across Art, Music and Drama whilst at Bangkok Patana School. Reflections from Ross Corker, Curriculum Leader for Art I first worked with Coke when he signed up to the ‘Miniature Worlds’ Elective. Instantly, his passion for drawing, making things and temple architecture was clear to see. Using photographs and secondary images, Coke went on to create a miniature version of the Angkor Wat temple site in Cambodia - all inside a wooden box about the size of a shoe box. Looking back now, this is where the flame (or what his father described to me as the obsession!) was lit and Coke began making more and more miniature models of temples and Thai architecture. During Year 12, Coke took his interest in Thai temple architecture, and its influences further, by using it as the starting point to an Extended Essay in Visual Arts. Coke went on to produce a personal, engaging and informative piece of writing which truly expressed his knowledge and understanding. All of this subsequently led to the creation of what can only be described as a spectacular three-dimensional model city of old Bangkok. Coke’s own description of his work reads as follows: “Old Bangkok displayed throughout time as a series of small scale handmade models, showcasing the time period 1782-2009. My inspiration behind the work is old photographs and maps that show the same, and yet somewhat different, city than today. My art is created with card, toothpicks and whatever else I find lying around.” Built in stages over time, with phenomenal attention to detail, Coke brought old Bangkok back to life in all its glory. Despite not studying on the IB Visual Arts course, Coke’s passion for making things led to an invitation to exhibit his work at the final IB Exhibition as a guest artist. His show was extremely well received by the audience and allowed Coke to further share his interests and artistic ability.