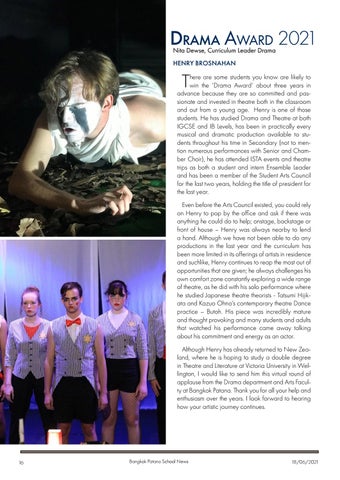 here are some students you know are likely to win the ‘Drama Award’ about three years in advance because they are so committed and passionate and invested in theatre both in the classroom and out from a young age. Henry is one of those students. He has studied Drama and Theatre at both IGCSE and IB Levels, has been in practically every musical and dramatic production available to students throughout his time in Secondary (not to mention numerous performances with Senior and Chamber Choir), he has attended ISTA events and theatre trips as both a student and intern Ensemble Leader and has been a member of the Student Arts Council for the last two years, holding the title of president for the last year. Even before the Arts Council existed, you could rely on Henry to pop by the office and ask if there was anything he could do to help; onstage, backstage or front of house – Henry was always nearby to lend a hand. Although we have not been able to do any productions in the last year and the curriculum has been more limited in its offerings of artists in residence and suchlike, Henry continues to reap the most out of opportunities that are given; he always challenges his own comfort zone constantly exploring a wide range of theatre, as he did with his solo performance where he studied Japanese theatre theorists - Tatsumi Hijikata and Kazuo Ohno’s contemporary theatre Dance practice – Butoh. His piece was incredibly mature and thought provoking and many students and adults that watched his performance came away talking about his commitment and energy as an actor. Although Henry has already returned to New Zealand, where he is hoping to study a double degree in Theatre and Literature at Victoria University in Wellington, I would like to send him this virtual round of applause from the Drama department and Arts Faculty at Bangkok Patana. Thank you for all your help and enthusiasm over the years. I look forward to hearing how your artistic journey continues.