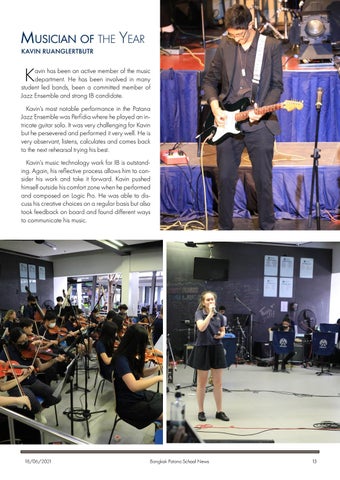 Musician of the Year KAVIN RUANGLERTBUTR

avin has been an active member of the music department. He has been involved in many student led bands, been a committed member of Jazz Ensemble and strong IB candidate. Kavin’s most notable performance in the Patana Jazz Ensemble was Perfidia where he played an intricate guitar solo. It was very challenging for Kavin but he persevered and performed it very well. He is very observant, listens, calculates and comes back to the next rehearsal trying his best. Kavin’s music technology work for IB is outstanding. Again, his reflective process allows him to consider his work and take it forward. Kavin pushed himself outside his comfort zone when he performed and composed on Logic Pro. He was able to discuss his creative choices on a regular basis but also took feedback on board and found different ways to communicate his music.