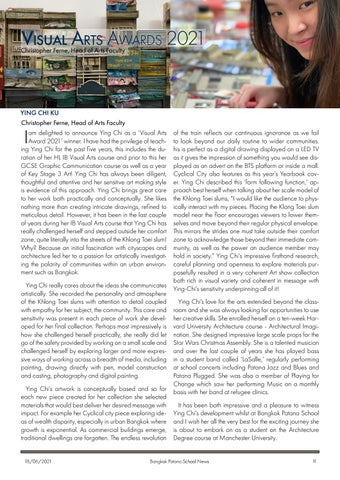 YING CHI KU Christopher Ferne, Head of Arts Faculty am delighted to announce Ying Chi as a ‘Visual Arts Award 2021’ winner. I have had the privilege of teaching Ying Chi for the past five years, this includes the duration of her HL IB Visual Arts course and prior to this her GCSE Graphic Communication course as well as a year of Key Stage 3 Art! Ying Chi has always been diligent, thoughtful and attentive and her sensitive art making style is evidence of this approach. Ying Chi brings great care to her work both practically and conceptually. She likes nothing more than creating intricate drawings, refined to meticulous detail. However, it has been in the last couple of years during her IB Visual Arts course that Ying Chi has really challenged herself and stepped outside her comfort zone, quite literally into the streets of the Khlong Toei slum! Why? Because an initial fascination with cityscapes and architecture led her to a passion for artistically investigating the polarity of communities within an urban environment such as Bangkok.

of the train reflects our continuous ignorance as we fail to look beyond our daily routine to wider communities. his is perfect as a digital drawing displayed on a LED TV as it gives the impression of something you would see displayed as an advert on the BTS platform or inside a mall. Cyclical City also features as this year’s Yearbook cover. Ying Chi described this ‘form following function,’ approach best herself when talking about her scale model of the Khlong Toei slums, “I would like the audience to physically interact with my pieces. Placing the Klong Toei slum model near the floor encourages viewers to lower themselves and move beyond their regular physical envelope. This mirrors the strides one must take outside their comfort zone to acknowledge those beyond their immediate community, as well as the power an audience member may hold in society.” Ying Chi’s impressive firsthand research, careful planning and openness to explore materials purposefully resulted in a very coherent Art show collection both rich in visual variety and coherent in message with Ying Chi really cares about the ideas she communicates Ying-Chi’s sensitivity underpinning all of it! artistically. She recorded the personality and atmosphere of the Khlong Toei slums with attention to detail coupled Ying Chi’s love for the arts extended beyond the classwith empathy for her subject, the community. This care and room and she was always looking for opportunities to use sensitivity was present in each piece of work she devel- her creative skills. She enrolled herself on a ten-week Haroped for her final collection. Perhaps most impressively is vard University Architecture course - Architectural Imagihow she challenged herself practically, she really did let nation. She designed impressive large scale props for the go of the safety provided by working on a small scale and Star Wars Christmas Assembly. She is a talented musician challenged herself by exploring larger and more expres- and over the last couple of years she has played bass sive ways of working across a breadth of media, including in a student band called ‘LaSalle,’ regularly performing painting, drawing directly with pen, model construction at school concerts including Patana Jazz and Blues and and casting, photography and digital painting. Patana Plugged. She was also a member of Playing for Change which saw her performing Music on a monthly Ying Chi’s artwork is conceptually based and so for basis with her band at refugee clinics. each new piece created for her collection she selected materials that would best deliver her desired message with It has been both impressive and a pleasure to witness impact. For example her Cyclical city piece exploring ide- Ying Chi’s development whilst at Bangkok Patana School as of wealth disparity, especially in urban Bangkok where and I wish her all the very best for the exciting journey she growth is exponential. As commercial buildings emerge, is about to embark on as a student on the Architecture traditional dwellings are forgotten. The endless revolution Degree course at Manchester University. 18/06/2021