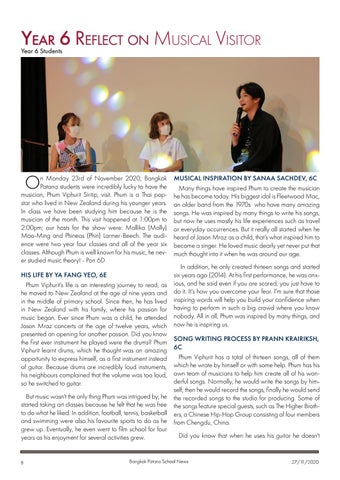 n Monday 23rd of November 2020, Bangkok Patana students were incredibly lucky to have the musician, Phum Viphurit Siritip, visit. Phum is a Thai popstar who lived in New Zealand during his younger years. In class we have been studying him because he is the musician of the month. This visit happened at 1:00pm to 2:00pm; our hosts for the show were: Mallika (Molly) Moo-Ming and Phineas (Phin) Larmer-Beech. The audience were two year four classes and all of the year six classes. Although Phum is well known for his music, he never studied music theory! - Pon 6D HIS LIFE BY YA FANG YEO, 6E Phum Viphurit’s life is an interesting journey to read, as he moved to New Zealand at the age of nine years and in the middle of primary school. Since then, he has lived in New Zealand with his family, where his passion for music began. Ever since Phum was a child, he attended Jason Mraz concerts at the age of twelve years, which presented an opening for another passion. Did you know the first ever instrument he played were the drums? Phum Viphurit learnt drums, which he thought was an amazing opportunity to express himself, as a first instrument instead of guitar. Because drums are incredibly loud instruments, his neighbours complained that the volume was too loud, so he switched to guitar. But music wasn’t the only thing Phum was intrigued by; he started taking art classes because he felt that he was free to do what he liked. In addition, football, tennis, basketball and swimming were also his favourite sports to do as he grew up. Eventually, he even went to film school for four years as his enjoyment for several activities grew.

MUSICAL INSPIRATION BY SANAA SACHDEV, 6C Many things have inspired Phum to create the musician he has become today. His biggest idol is Fleetwood Mac, an older band from the 1970s who have many amazing songs. He was inspired by many things to write his songs, but now he uses mostly his life experiences such as travel or everyday occurrences. But it really all started when he heard of Jason Mraz as a child, that’s what inspired him to become a singer. He loved music dearly yet never put that much thought into it when he was around our age. In addition, he only created thirteen songs and started six years ago (2014). At his first performance, he was anxious, and he said even if you are scared, you just have to do it. It’s how you overcome your fear. I’m sure that those inspiring words will help you build your confidence when having to perform in such a big crowd where you know nobody. All in all, Phum was inspired by many things, and now he is inspiring us. SONG WRITING PROCESS BY PRANN KRAIRIKSH, 6C Phum Viphurit has a total of thirteen songs, all of them which he wrote by himself or with some help. Phum has his own team of musicians to help him create all of his wonderful songs. Normally, he would write the songs by himself, then he would record the songs, finally he would send the recorded songs to the studio for producing. Some of the songs feature special guests, such as The Higher Brothers, a Chinese Hip-Hop Group consisting of four members from Chengdu, China. Did you know that when he uses his guitar he doesn't