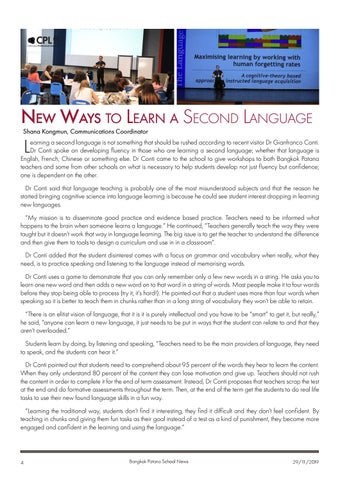 earning a second language is not something that should be rushed according to recent visitor Dr Gianfranco Conti. Dr Conti spoke on developing fluency in those who are learning a second language; whether that language is English, French, Chinese or something else. Dr Conti came to the school to give workshops to both Bangkok Patana teachers and some from other schools on what is necessary to help students develop not just fluency but confidence; one is dependent on the other. Dr Conti said that language teaching is probably one of the most misunderstood subjects and that the reason he started bringing cognitive science into language learning is because he could see student interest dropping in learning new languages. “My mission is to disseminate good practice and evidence based practice. Teachers need to be informed what happens to the brain when someone learns a language.” He continued, “Teachers generally teach the way they were taught but it doesn’t work that way in language learning. The big issue is to get the teacher to understand the difference and then give them to tools to design a curriculum and use in in a classroom”. Dr Conti added that the student disinterest comes with a focus on grammar and vocabulary when really, what they need, is to practice speaking and listening to the language instead of memorising words. Dr Conti uses a game to demonstrate that you can only remember only a few new words in a string. He asks you to learn one new word and then adds a new word on to that word in a string of words. Most people make it to four words before they stop being able to process (try it, it’s hard!). He pointed out that a student uses more than four words when speaking so it is better to teach them in chunks rather than in a long string of vocabulary they won’t be able to retain. “There is an elitist vision of language, that it is it is purely intellectual and you have to be “smart” to get it, but really,” he said, “anyone can learn a new language, it just needs to be put in ways that the student can relate to and that they aren’t overloaded.” Students learn by doing, by listening and speaking, “Teachers need to be the main providers of language, they need to speak, and the students can hear it.” Dr Conti pointed out that students need to comprehend about 95 percent of the words they hear to learn the content. When they only understand 80 percent of the content they can lose motivation and give up. Teachers should not rush the content in order to complete it for the end of term assessment. Instead, Dr Conti proposes that teachers scrap the test at the end and do formative assessments throughout the term. Then, at the end of the term get the students to do real life tasks to use their new found language skills in a fun way. “Learning the traditional way, students don’t find it interesting, they find it difficult and they don’t feel confident. By teaching in chunks and giving them fun tasks as their goal instead of a test as a kind of punishment, they become more engaged and confident in the learning and using the language.”

A weekly roundup of News from Bangkok Patana School

A weekly roundup of News from Bangkok Patana School