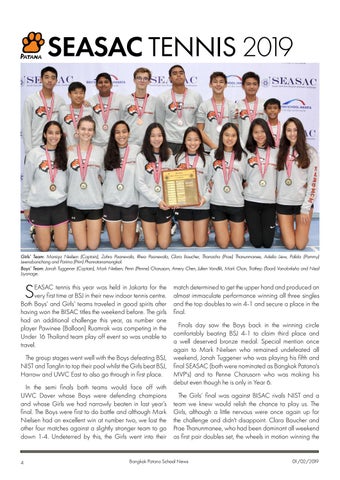 EASAC tennis this year was held in Jakarta for the very first time at BSJ in their new indoor tennis centre. Both Boys’ and Girls’ teams traveled in good spirits after having won the BISAC titles the weekend before. The girls had an additional challenge this year, as number one player Pawinee (Balloon) Ruamrak was competing in the Under 16 Thailand team play off event so was unable to travel.

match determined to get the upper hand and produced an almost immaculate performance winning all three singles and the top doubles to win 4-1 and secure a place in the final.

Finals day saw the Boys back in the winning circle comfortably beating BSJ 4-1 to claim third place and a well deserved bronze medal. Special mention once again to Mark Nielsen who remained undefeated all The group stages went well with the Boys defeating BSJ, weekend, Jonah Tuggener who was playing his fifth and NIST and Tanglin to top their pool whilst the Girls beat BSJ, final SEASAC (both were nominated as Bangkok Patana's Harrow and UWC East to also go through in first place. MVP's) and to Penne Charusorn who was making his debut even though he is only in Year 6. In the semi finals both teams would face off with UWC Dover whose Boys were defending champions The Girls’ final was against BISAC rivals NIST and a and whose Girls we had narrowly beaten in last year’s team we knew would relish the chance to play us. The final. The Boys were first to do battle and although Mark Girls, although a little nervous were once again up for Nielsen had an excellent win at number two, we lost the the challenge and didn't disappoint. Clara Boucher and other four matches against a slightly stronger team to go Prae Thanunmanee, who had been dominant all weekend down 1-4. Undeterred by this, the Girls went into their as first pair doubles set, the wheels in motion winning the

A weekly round up of news from Bangkok Patana School.

A weekly round up of news from Bangkok Patana School.