The Business of Archives: a labour of love 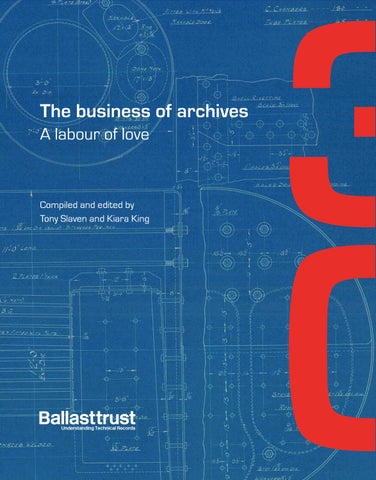 The business of archives A labour of love

Compiled and edited by Tony Slaven and Kiara King

Images of items from archive collections have been reproduced with kind permission of the owning repository as listed in appendix A. Photographs of the Ballast Trust in 2018 used throughout were taken by Greg Smith. Images of the ARA workshop have been reproduced with permission of the Archives and Records Association. All other images are from collections held by the Ballast Trust.

Acknowledgements We would like to thank all those who generously shared their expertise and memories by reviewing the publication in draft or contributing content. In particular, contributions from the editorial committee: • John R Hume – Trustee; Professor; Industrial Historian; former Chief Inspector of Historic Buildings and former Chairman of the Royal Commission on the Ancient and Historical Monuments of Scotland • Kiara King – Archivist and Manager of the Ballast Trust • Lesley Richmond – Trustee; former University Archivist and Deputy Director of the University of Glasgow Library • Tony Slaven – Trustee; Director of the Ballast Trust; Emeritus Professor of Business History at the University of Glasgow, President Business Archives Council of Scotland • Cheryl Traversa – Brand Archive Manager for The Macallan and former Business Archives Surveying Officer at the Ballast Trust Support and contributions have been provided by staff and volunteers of the Ballast Trust and representatives of various organisations and archives including: the Archives and Records Association, the Business Archives Council of Scotland, Edinburgh City Archives, Glasgow City Archives, Glasgow Museums, National Records of Scotland, North Lanarkshire Archives, Project Class 22 Society, Scottish Borders Archive and Local History Centre, Scottish Maritime Museum, Timeline Films, Trustees of the Ballast Trust, University of Glasgow Archives and Special Collections.

Introduction – An Appreciation of Technical Records

Part One – The Ballast Trust: A History Chapter 1. William Lind – Entrepreneur to Pioneer

Chapter 8. The Value of Technical Records

Appendices Appendix A. The Staff, Volunteers and Trustees of the Ballast Trust

A labour of love ‘Bill Lind’ just had to be the first two words in any introduction to this tribute to the Ballast Trust, past, present and future. Bill and the Ballast Trust were and are synonymous. The Trust was Bill’s inspiration and it lives on as a vital and relevant testament to his vision and generosity. If he had not founded the Trust and attracted enthusiastic and loyal support from those who shared his vision the world of business history and archives in Scotland would be a poorer place. I knew Bill from my early years in McClure Naismith where Bill was a valued client and good friend of my senior partner James Sutherland. I like to think that in later years Bill became my friend too. Bill was formidable and kind, generous and careful, conservative and visionary, politically incorrect and public spirited – a unique figure who commanded respect and loyalty. Today the Trust is effectively led by Tony Slaven and Kiara King with the support of an excellent team which includes many volunteers and a Board which is committed to the future success of the Trust. My thanks to them all. As in so many organisations it is the people who make the difference. There is no shortage of challenging and relevant work and we look forward to the next 30 years with confidence. Bill would be justifiably proud to read what follows.

Kenneth Chrystie Chairman of the Board of Trustees

missed by his friends in the Ballast Trust, and by his family. The other strengthening of the professional staff came in 2014 with the appointment of Cheryl Traversa as Surveying Officer, this post continued in a new appointment in June 2018 of Chris Cassells. While the core staff has remained small, the operational work of the Trust has been driven and expanded by the experience, skills and untiring commitment of a regularly renewing band of volunteers. These are mainly retired men who have worked in the great companies of Clydeside, and bring their knowledge to the listing, cataloguing and description of the technical records being processed day by day. In recent years they have been complemented by placements of an increasing stream of short-term graduate archivists. Over the three decades of its existence this work has attracted the service of some 75 volunteers. At the present time eight volunteers assist the core staff on a regular long-term basis. The value of their work is beyond measure and is appreciated greatly. Through the passage of time, and the inevitability of death, retirals and resignations, only two individuals have had a continuous connection to and involvement with the Ballast Trust from its foundation in 1988. Professor Slaven, first as Trustee and subsequently as Director, and Delaine Colquhoun, first as Bill Lind’s secretary in his days in his transport business at W H Malcolm’s in Bridge of Weir, and then as his personal assistant and archive assistant throughout the three decades of the Ballast Trust. After Bill’s death in October 2007 Delaine almost unconsciously began to fulfil and deliver another and crucial role. She was, and is, the living memory bank of all things relating to Bill and his activities. Nothing and no one have escaped her memory and her opinion.

Delaine Colquhoun and plans at the Ballast Trust, 2012.

volunteers were welcomed, scrutinised, introduced and ultimately approved of once they had passed her test of acceptability. The transformation of work and practice that took place in Walkinshaw Street after Bill’s death depended substantially on her support, her knowledge, and her tact and empathy with the new young professional archivists. The Ballast Trust was Bill Lind’s creation and hobby, but it also became Delaine’s domain. Staff and volunteers alike became part of her Ballast Trust family.

In the world of Scotland’s business archives partnerships have been critical to the growth and success of our archive services. These relationships Moreover, as critical new appointments were made to have developed steadily since the 1950s. The the core staff, and new recruits joined the volunteers, Economic History departments at Glasgow and Delaine was the touchstone of information, advice and Strathclyde Universities each promoted different support. Integrating new young female appointees aspects of business history and forged links with the into a core and volunteer workforce of post retiral Scottish Record Office, activities which soon led to males was a delicate business. She managed the establishment of the Business Archives Council of this with aplomb, first with Kiara King as the new Scotland in 1960. From these beginnings other local archivist, and later with Cheryl Traversa as the authority archives emerged. The Ballast Trust was Surveying Officer. They, and a changing flow of new nurtured by these developments and is intimately 72 The business of archives – A labour of love

linked to them today. The Ballast Trust family consequently includes our partners – the creators and custodians of records – the archive agencies and our client companies. Without their cooperation and trust in our services to transfer their collections to our safekeeping we would not have a role to play. Their records come to us in unsorted disarray, and in large measure in anonymity. Irrespective of the success or failure of these enterprises, the sorting, listing and processing of the collections secures their contribution to our industrial and commercial heritage, and they are the visible evidence of the work and expertise of Bill Lind’s Ballast Trust. The management of the affairs of the Ballast Trust is ultimately in the hands of the Trustees. When formed in 1988 they were six in number, and in total over the three decades since then there have been twelve Trustees. Deaths, retirals, and resignations have seen seven Trustees demit office. At present there are five Trustees of whom Professor Slaven is the sole survivor from the initial appointees. Throughout the life of the Ballast Trust the Trustees have been an unfailing source of support, advice and encouragement, a contribution that has shaped the ambition and the ethos of the Trust in furtherance of Bill’s wishes.

The decade since Bill Lind died has witnessed the Ballast Trust being transformed from his smallscale specialised technical records service with limited outreach into a much wider archive service unit. This has been a third seminal change involving both diversification and extensive networking. The outcome is that the Ballast Trust is now well integrated with the main archive sector in Scotland, and through its comprehensive online presence including a website, twitter and its Flickr photographic initiative becoming increasingly visible internationally. The use of these different channels has raised awareness about the Ballast Trust, providing information on its work and services to a global audience and given us new ways to engage with users and custodians of business archives. At its thirtieth birthday the Trustees can clearly demonstrate that they have more than met Bill Lind’s aspirations for the continuation and development of his private passion, his Ballast Trust. The way ahead will be challenging but the Trustees can be confident that the future will be at least as successful as the past achievements.

Prof. Tony Slaven and Kiara King at the Ballast Trust, 2018

The business of archives – A labour of love 73

The business of archives – A labour of love 75

The Business of Archives: a labour of love

2018 marked 30 years since the establishment of the Ballast Trust. This is a preview version of the publication 'The Business of Archives: A Labour of Love', prepared to mark the 30th anniversary of the Trust. The publication features chapters on William Lind, the history of the Ballast Trust, the significance of technical records, aspects of our working model, our technical records guidance and a list of the collections the Trust has processed since 1988. Printed copies can be ordered from the Ballast Trust and information about this is available on our website. 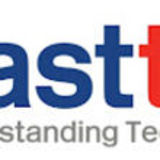