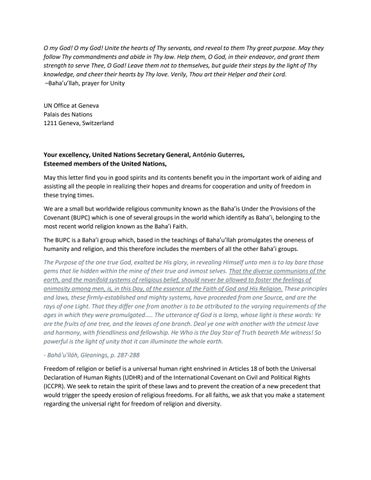 O my God! O my God! Unite the hearts of Thy servants, and reveal to them Thy great purpose. May they follow Thy commandments and abide in Thy law. Help them, O God, in their endeavor, and grant them strength to serve Thee, O God! Leave them not to themselves, but guide their steps by the light of Thy knowledge, and cheer their hearts by Thy love. Verily, Thou art their Helper and their Lord. –Baha’u’llah, prayer for Unity UN Office at Geneva Palais des Nations 1211 Geneva, Switzerland

Your excellency, United Nations Secretary General, António Guterres, Esteemed members of the United Nations, May this letter find you in good spirits and its contents benefit you in the important work of aiding and assisting all the people in realizing their hopes and dreams for cooperation and unity of freedom in these trying times. We are a small but worldwide religious community known as the Baha’is Under the Provisions of the Covenant (BUPC) which is one of several groups in the world which identify as Baha’i, belonging to the most recent world religion known as the Baha’i Faith. The BUPC is a Baha’i group which, based in the teachings of Baha’u’llah promulgates the oneness of humanity and religion, and this therefore includes the members of all the other Baha’i groups. The Purpose of the one true God, exalted be His glory, in revealing Himself unto men is to lay bare those gems that lie hidden within the mine of their true and inmost selves. That the diverse communions of the earth, and the manifold systems of religious belief, should never be allowed to foster the feelings of animosity among men, is, in this Day, of the essence of the Faith of God and His Religion. These principles and laws, these firmly-established and mighty systems, have proceeded from one Source, and are the rays of one Light. That they differ one from another is to be attributed to the varying requirements of the ages in which they were promulgated….. The utterance of God is a lamp, whose light is these words: Ye are the fruits of one tree, and the leaves of one branch. Deal ye one with another with the utmost love and harmony, with friendliness and fellowship. He Who is the Day Star of Truth beareth Me witness! So powerful is the light of unity that it can illuminate the whole earth. - Bahá&#39;u&#39;lláh, Gleanings, p. 287-288 Freedom of religion or belief is a universal human right enshrined in Articles 18 of both the Universal Declaration of Human Rights (UDHR) and of the International Covenant on Civil and Political Rights (ICCPR). We seek to retain the spirit of these laws and to prevent the creation of a new precedent that would trigger the speedy erosion of religious freedoms. For all faiths, we ask that you make a statement regarding the universal right for freedom of religion and diversity.

To summarize our situation; the American Baha’i administration, located in Wilmette Illinois, of the mainstream Baha’i group based in Haifa, Israel; is attempting to deny other Baha’i groups the right to call themselves Baha’i. Its members believe that only they, have the right to call themselves Baha’is, to the exclusion of all other groups. Nor do they approve of other Baha’i groups using even the word Baha’i in their teaching activities as they believe that in this way the Baha’i Faith is being misrepresented. This is similar to nearly every other religion in history where each time, branches have been created over succession, traditions or understandings of the teachings; and those who follow those branches are generally shunned by the main branches. This time is unfortunately no different. The Catholic church alone has 3 distinct branches, 6 branches within those branches and 24 branches from those. All of which call themselves Catholic. However, that would not portray our situation accurately, as Baha’i is more akin to the term Christian or Muslim or Hindu or any of the other great religions of the world. In Islam there are the Sunni, Shi’a, Ibadi, Ahmadiyya, and Sufi branches, again all of which whom call themselves Muslim. The similarities between Catholicism and Islam in this regard are particular in circumstance as nearly each branch has the cause of succession at its root. In 2005 they attempted to shut down the official website of the BUPC Universal House of Justice in the Rocky Mountains by attempting to claim a trademark on our domain name (uhj.net). The domain (uhj.net) is the official BUPC website for the Universal House of Justice, with the guardian (successor) as required in the Will and Testament of both Baháú&#39;lláh and his son and successor Abdu&#39;l-Baha, and their case was overturned at WIPO, as the organization did not find any valid basis for their claim. In 2020, the mainstream Baha’i group trademarked the name UHJ, and have launched yet another attempt to close down our official (uhj.net) website, this time however, directly attacking the president and guardian of the UHJ and BUPC, in an effort to remove our ability to simply use the term “UHJ” (Universal House of Justice) or in fact call ourselves Baha’is at all. All in complete disregard for the teachings of the founder of the faith, Baháú&#39;lláh who aptly stated; It is incumbent upon every man, in this Day, to hold fast unto whatsoever will promote the interests, and exalt the station, of all nations and just governments. Through each and every one of the verses which the Pen of the Most High hath revealed, the doors of love and unity have been unlocked and flung open to the face of men. We have erewhile declared – and Our Word is the truth: &quot;Consort with the followers of all religions in a spirit of friendliness and fellowship.&quot; Whatsoever hath led the children of men to shun one another, and hath caused dissensions and divisions amongst them, hath, through the revelation of these words, been nullified and abolished. From the heaven of God&#39;s Will, and for the purpose of ennobling the world of being and of elevating the minds and souls of men, hath been sent down that which is the most effective instrument for the education of the whole human race. Of old it hath been revealed: &quot;Love of one&#39;s country is an element of the Faith of God.&quot; The Tongue of Grandeur hath, however, in the day of His manifestation proclaimed: “It is not his to boast who loveth his country, but it is his who loveth the world.&quot; - Bahá&#39;u&#39;lláh, Gleanings, p. 94-95 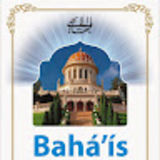