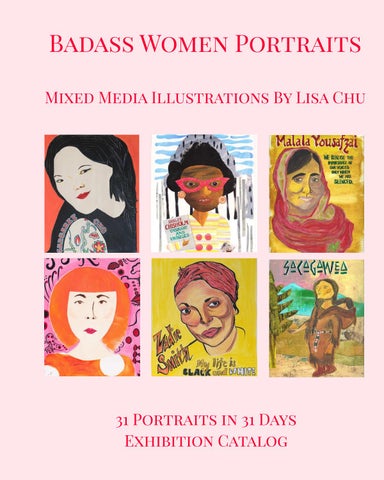 This series of Badass Women Portraits arose from a daily art challenge initiated on social media, which provided the timely inspiration for this exhibition. The list of Badass Women was curated by Sarah Wilde Pearson (@theinkyhand) and Sam About The Artist Lisa Chu is an American-born artist and illustrator Zabell (@samzawrites) on Instagram. The artist, based in Half Moon Bay, California. Her whimsical Lisa Chu, created thirty-one portraits of Badass Women in thirty-one days. Many of the women interpretations of life inspire a daily art practice she did not know before this project, and she utilizing a variety of media, chosen to reflect the committed to learning something about them essence of each subject she encounters. From before interpreting them in visual form. She watercolor and ink illustration to collage and hopes viewers are inspired by not only the acrylic painting, Lisa enjoys rediscovering the images but also the lives and words of this group innocence of &quot;beginner&#39;s mind&quot; while also of women from throughout history and around allowing deeper contemplation to influence her art. &quot;Wild Tomato Arts&quot;, the name Lisa chose for the world. She also invites viewers to share the name and/or story of a Badass Woman who has her art studio, reflects this celebration of the particularly inspired them. Post these on social spontaneous and organic, both in life and in art. media with the tag #badasswomenchallenge or Her previous exhibitions include the juried 50|50 show at Sanchez Art Center, serving as local lead contact the artist at wildtomatoarts@gmail.com. for the global public art installation &quot;The World We Want&quot; at Half Moon Bay Library, serving as artistic coordinator for Coastal Wildflower Day, and Open Studios with Colony of Coastside Artists. Most recently, she returned from a month-long, self-created artist residency focused on Gettysburg National Park and surrounding Civil War historic sites, which resulted in a solo exhibition at Half Moon Bay Library and a series of ongoing projects.

The artist, Lisa Chu, with view of installation at Bamboo hair+body, Half Moon Bay.

I would like to thank Yasmin Caminiti, owner of Bamboo hair+body in Half Moon Bay, for being a generous patron of local artists for the past decade, and for inviting me to be Artist-in-Residence. Your enthusiasm and attention to detail are so appreciated. Thanks also to Sarah Griego Guz of Half Moon Bay Review, who advocated for this story to be told, and to Rebecca Greenway of NBC Bay Area, who brought her video camera all the way to the coast to film the exhibit. Thank you, Sarah Wilde Pearson, aka @theinkyhand on Instagram, for issuing the Badass Women Challenge, a seemingly simple list of names that has morphed and evolved into so many forms of inspiration for me and others. Thanks to all the friends, old and new, who came to the opening reception to look at the art and show their support. Thank you to all the friends and strangers who have followed and liked my posts on Instagram and Facebook. Your daily nudges of encouragement helped me keep going. And to the new patrons of my art who purchased original pieces to hang in their homes: imagining you enjoying these Badass Women at home makes my heart sing. Thank you for supporting my life as an artist in the most practical of ways. Finally, many thanks to my partner-in-living, Randy, for enduring the encroachment of art supplies and workstations spreading like tree branches inside our house. Words cannot express my appreciation for providing the planting pot in which my creative life has blossomed. - Lisa Chu April 2017

Day 1/31: Gloria Steinem (1934 - ) American journalist, activist “Power can be taken, but not given. The process of the taking is empowerment in itself.” 9”x12”, watercolor and ink on paper, mounted on panel 5

Day 3/31: Miriam Makeba (1932-2008) Nicknamed “Mama Africa”. South African singer, actor, UN goodwill ambassador, and civil rights activist. “Girls are the future mothers of our society, and it is important that we focus on their well-being.” 9”x12”, ink and gouache on paper, digital 7

Day 4/31: Tina Fey (1970 - ) American actress, comedian, writer, producer “Confidence is 10% hard work and 90% delusion.” The portrait is based on the cover art for her bestselling autobiography, Bossypants. 9”x12”, gouache on paper, digital 8

Day 7/31: Ismat Chughtai (1915-1991) Indian writer of Urdu fiction Her short story “Lihaaf”, which dealt with homosexuality, brought charges of obscenity when it was published in India in 1942. Instead of apologizing, Chughtai went to court and won her case. 9”x12”, ink on paper, mounted on panel

Day 8/31: J.K. Rowling (1965 - ) British novelist &quot;Failure gave me an inner security that I had never attained by passing examinations.&quot; - from her 2008 Harvard University commencement speech. 9&quot;x12&quot; gouache on paper, mounted on panel 12

Day 10/31: Shruti Kapoor Indian social entrepreneur, economist, women’s rights activist. Founder of Sayfty, educating and empowering women and girls against all forms of violence. &quot;Celebrate your culture and be proud of your traditions, but challenge the ones that hold you back from growing.” 9”x12”, watercolor and ink on paper, mounted on panel

Day 14/31: Malala Yousafzai (1997 - ) Pakistani activist for female education, humanitarian, and the youngest-ever Nobel Prize laureate. Winner, Nobel Peace Prize, 2014. In 2009, she began writing a blog detailing her existence under Taliban occupation of her district. In 2012, she was shot in an attempted assassination by the Taliban. “We realise the importance of our voices only when we are silenced.” 9”x12”, acrylic, oil pastel, gouache, on paper, mounted on panel 18

Day 17/31: Rosa Parks (1913-2005) American civil rights activist. “The mother of the freedom movement” On December 1, 1955, in Montgomery, AL, she refused to obey a bus driver’s order to give up her seat in the colored section to a white passenger, after the white section was filled. 12”x16”, mixed media collage on paper, mounted on panel

Day 21/31: Rosalind Franklin (1920-1958) English chemist and molecular biologist. Best known for her work on the X-ray diffraction images of DNA, particularly Photo 51 (represented in the background pattern of this portrait), which led to the discovery of the DNA double helix for which James Watson, Francis Crick and Maurice Wilkins shared the Nobel Prize in 1962. &quot;In my view, all that is necessary for faith is the belief that by doing our best we shall succeed in our aims: the improvement of mankind.” 9”x12”, gouache on paper, mounted on panel 25

Day 31/31: Mitsuye Endo (1920-2006) American plaintiff in the landmark lawsuit that ultimately led to the closing of Japanese internment camps and return of Japanese Americans to their homes in 1945. She was a state employee who was detained at Tule Lake camp in California. 9â&amp;#x20AC;?x12â&amp;#x20AC;?, mixed media collage on paper, mounted on panel

Guests were invited to draw, doodle, or write their responses to the exhibition. Below is a page by a guest, Magdalena.

The artist at Opening Reception for exhibition at Bamboo hair+body.

Guests were invited to suggest additional names of Badass Women not shown in the exhibition (above), as well as contemplate the question, &quot;What makes a Badass Woman Badass?&quot; (right).

A guest shows off her Badass Woman socks.

Staying Loose: Scenes from the Artist&#39;s Sketchbook One of the most important lessons from my creative process is the constant need to stay loose, especially when my mind perceives the need for my product to be &quot;good&quot;. My sketchbook is a place of liberation where ideas can be tested, materials tried, and general silliness abound, without thought of being evaluated, or even seen. On these pages, I share a few images from my sketchbooks during the month of making Badass Women Portraits.

Emma Watson&#39;s face was especially nerve-wracking to &quot;get right&quot;, so I drew this as a way to get away from accuracy as a goal, finding playfulness again.

Toni Morrison&#39;s hair struck me as a visually interesting frame for her regal face. 40

I found several images of Rosa Parks and played with featuring her face, before finally deciding to frame the entire composition with a suggestion of the bus she was riding.

Seeing Shirley Chisholm&#39;s glasses and suits inspired me to use collage, a medium I used for several subsequent portraits.

I used magazine images to practice drawing faces and figures, new to my practice.

Sketch for the collage portrait of Sacagawea. 41

In partnership with New Leaf Community Classroom in Half Moon Bay, I offered a half-day workshop for adults, inspired by the Badass Women Challenge. Using writing prompts, collage, acrylic paints, and children&#39;s art materials, workshop participants each created their own portrait of a Badass Woman who inspires them. The images on these pages are the students&#39; work.

Dedicated to all women and girls, everywhere. We dream for you.

All images and text copyright Lisa Chu, 2017. Please do not reproduce or excerpt without permission from author. All photography by Lisa Chu, except as noted. Page 2 - photo by Randy Bales. Page 38 - lower left photo by Beth Pielert. Book design by Lisa Chu. Printed in USA by Blurb, Inc.