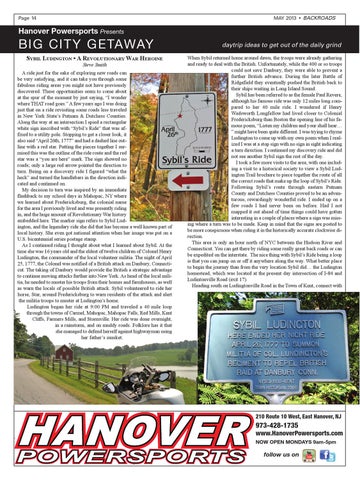 BIG CI T Y G ETAWAY sybil luDinGton • a revolutionary War heroine Steve Smith A ride just for the sake of exploring new roads can be very satisfying, and it can take you through some fabulous riding areas you might not have previously discovered. These opportunities seem to come about at the spur of the moment by just saying, “I wonder where THAT road goes.” A few years ago I was doing just that on a ride revisiting some roads less traveled in New York State’s Putnam &amp; Dutchess Counties. Along the way at an intersection I spied a rectangular white sign inscribed with “Sybil’s Ride” that was affixed to a utility pole. Stopping to get a closer look, it also said “April 26th, 1777” and had a dashed line outline with a red star. Putting the pieces together I surmised this was the outline of the ride route and the red star was a “you are here” mark. The sign showed no roads; only a large red arrow pointed the direction to turn. Being on a discovery ride I figured “what the heck” and turned the handlebars in the direction indicated and continued on. My decision to turn was inspired by an immediate flashback to my school days in Mahopac, NY where we learned about Fredericksburg, the colonial name for the area I previously lived and was presently riding in, and the huge amount of Revolutionary War history embedded here. The marker sign refers to Sybil Ludington, and the legendary ride she did that has become a well known part of local history. She even got national attention when her image was put on a U.S. bicentennial series postage stamp. As I continued riding I thought about what I learned about Sybil. At the time she was 16 years old and the eldest of twelve children of Colonel Henry Ludington, the commander of the local volunteer militia. The night of April 25, 1777, the Colonel was notified of a British attack on Danbury, Connecticut. The taking of Danbury would provide the British a strategic advantage to continue moving attacks further into New York. As head of the local militia, he needed to muster his troops from their homes and farmhouses, as well as warn the locals of possible British attack. Sybil volunteered to ride her horse, Star, around Fredericksburg to warn residents of the attack and alert the militia troops to muster at Ludington’s home. Ludington began her ride at 9:00 PM and traveled a 40 mile loop through the towns of Carmel, Mahopac, Mahopac Falls, Red Mills, Kent Cliffs, Farmers Mills, and Stormville. Her ride was done overnight, in a rainstorm, and on muddy roads. Folklore has it that she managed to defend herself against highwayman using her father’s musket.

daytrip ideas to get out of the daily grind When Sybil returned home around dawn, the troops were already gathering and ready to deal with the British. Unfortunately, while the 400 or so troops could not save Danbury, they were able to prevent a further British advance. During the later Battle of Ridgefield they eventually pushed the British back to their ships waiting in Long Island Sound. Sybil has been referred to as the female Paul Revere, although his famous ride was only 12 miles long compared to her 40 mile ride. I wondered if Henry Wadsworth Longfellow had lived closer to Colonial Fredericksburg than Boston the opening line of his famous poem, “Listen my children and your shall hear… ” might have been quite different. I was trying to rhyme Ludington to come up with my own poem when I realized I was at a stop sign with no sign in sight indicating a turn direction. I continued my discovery ride and did not see another Sybil sign the rest of the day. I took a few more visits to the area, with one including a visit to a historical society to view a Sybil Ludington Trail brochure to piece together the route of all the correct roads that make up the loop of Sybil’s Ride. Following Sybil’s route through eastern Putnam County and Dutchess Counties proved to be an adventurous, rewardingly wonderful ride. I ended up on a few roads I had never been on before. Had I not mapped it out ahead of time things could have gotten interesting in a couple of places where a sign was missing where a turn was to be made. Keep in mind that the signs are posted to be more conspicuous when riding it in the historically accurate clockwise direction. This area is only an hour north of NYC between the Hudson River and Connecticut. You can get there by riding some really great back roads or can be expedited on the interstate. The nice thing with Sybil’s Ride being a loop is that you can jump on or off it anywhere along the way. What better place to begin the journey than from the very location Sybil did… the Ludington homestead, which was located at the present day intersection of I-84 and Ludintonville Road (exit 17). Heading south on Ludingtonville Road in the Town of Kent, connect with

Touring Deep in the Heart of Texas 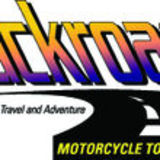