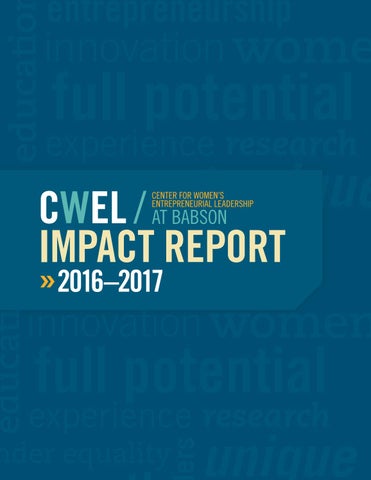 Babsonâ&#x20AC;&#x2122;s Center for Womenâ&#x20AC;&#x2122;s Entrepreneurial Leadership (CWEL) seeks to create a gender-enlightened business ecosystem where a diverse range of entrepreneurial leaders is encouraged to create economic and social value for themselves, their organizations, and society. The center does this by empowering women leaders through educational programs, events, and research while also promoting gender equity as a growth strategy that allows all individuals and organizations around the world to embrace their strengths and reach their full potential.

LETTER FROM THE EXECUTIVE DIRECTOR The 2016-2017 academic year was full of firsts and big announcements for CWEL. From a groundbreaking capital competition for women entrepreneurs, to a lineup of events and speakers focused on building gender acumen, CWEL is proud to be at the forefront of creating a gender-enlightened business ecosystem. Some notable highlights from this past year: »»Hosted the inaugural Babson Breakaway Challenge, a pioneering competition to promote gender parity in the venture capital industry, and awarded $250,000 to a high-potential, women-led business

»»Welcomed Smaiyra Million—former CEO, investor, and business advisor—to the CWEL team as Director of Strategic Initiatives »»Designed and hosted Launch and Grow: The Kenyan Women’s Entrepreneurial Leadership Program, a weeklong intensive experience for 15 women from Kenya As always, we’re grateful to the Babson College community, our generous donors, corporate and individual partners, and all who give their time and expertise to help support our mission.

PROGRAMS DURING THE ACADEMIC YEAR

SCHOLARS SINCE THE PROGRAM’S INCEPTION

Each year, a select group of undergraduate women students who demonstrate strong leadership abilities are chosen to receive financial support through the CWEL Scholars Program. As part of the program, the CWEL Scholars—along with all undergraduate students—are provided opportunities to learn, experiment, and lead. Exclusive events, cutting-edge expert talks, and hands-on coaching empower young women entrepreneurial leaders to combine business knowledge with passion and purpose.

“As a CWEL Scholar, I learned to take risks and push myself outside of my comfort zone. CWEL’s support of a student-led company inspired me take the leap of faith to work on the business. The experience turned out to be a defining part of my college experience, and one I talked about during my interviews for my current role at Amazon, as well as the position at Comcast/NBCUniversal that I will hold after Fulbright.” – Julianne Carlin ’17

Julianne Carlin entered Babson College as a CWEL Scholar. The summer after her first year, she traveled to Rwanda for a month as part of the CWEL Scholars program. There, she taught English and entrepreneurship. In her senior year, she became the president of the CWEL Scholars’ Executive Board. This past spring, Julianne was awarded a Fulbright Fellowship and will spend August 2017 to June 2018 in the Czech Republic. 6

GRADUATE STUDENTS As the first and longest-running center in any business school dedicated to educating, inspiring, and empowering women entrepreneurial leaders, CWEL provides Babson’s women graduate students with the resources they need to be dynamic leaders in the business world. CWEL is proud to support The Babson Association of Women MBAs (BAWMBA). This organization, led by students, provides opportunities to build networks, find and be a mentor, and attend both formal events and informal gatherings with the goal of encouraging the advancement of women in leadership roles.

“WIN Lab was definitely one of the highlights of my Babson experience. Being part of this year’s WIN cohort reaffirmed for me how unbelievably supportive and committed Babson is to empowering women entrepreneurs. WIN Lab pushed me to be better, not just as an entrepreneur, but as a person.” – Courtney Wilson M’17

Courtney Wilson is a former Army Engineer captain, combat veteran, and Bronze Star Medal recipient. While in Babson’s MBA program, she founded DropZone for Veterans, a website that connects veterans with the multitude of resources available to them. While Courtney was a member of the 2016-2017 WIN Lab cohort, she was named Hubweek’s Changemaker of 2016; included in BostInno’s 10 Startups You Should Know list; took second place at the Beantown Throwdown competition; won first place in the Streets Shares Veterans Small Business Plan Competition, taking home $5,000; and won $17,500 at the Vet to CEO startup competition.

“As we approach our Centennial, Babson is focused on educating Entrepreneurs of All Kinds who create economic and social value simultaneously. Supporting women-led entrepreneurship is central to that mission. We know that empowering women entrepreneurs can have a significant and positive impact on communities, economies and society as a whole. Babson’s Center for Women’s Entrepreneurial Leadership and our award-winning Women Innovating Now (WIN) Lab provide the community, skills, and resources that aspiring women entrepreneurs need to catalyze their entrepreneurial potential and make a difference in the world.” – Kerry Murphy Healey, Babson President

WOMEN INNOVATING NOW (WIN) LAB Created by CWEL, the Babson College Women Innovating Now (WIN) Lab® provides women entrepreneurs with an inspiring community and a rigorous, experiential process that catalyzes innovative thinking and enables them to successfully launch or transform businesses. Entering its fifth year, WIN Lab® has been designated as one of the top two specialty programs for Excellence in Entrepreneurship Education by the United States Association for Small Business and Entrepreneurship; earned BostInno’s designation as one of Boston’s “50 on Fire” innovators and visionaries; and was honored by the prestigious Rosoff Awards for diversity.

WIN Lab participants have collectively raised nearly $5.5 million in outside funding since program launch in 2013. “As a female founder, I cannot express enough how much of a difference it made to join a network of women who are smart, passionate, intelligent entrepreneurs—both participants in the WIN Lab as well as mentors and coaches. My business, and my career as an entrepreneur, will never be the same.”

(IN BOSTON, 1ST YEAR IN MIAMI)

“Experiencing the WIN Lab allowed us to think critically about growth strategies for our company. The Lab’s diverse cohort, representing various industries, provided a group-learning atmosphere and a sense of community that will continue long after the program ends. I am so grateful for the resources and the mentoring I received as a member of the WIN Lab.” – Terri-Ann Brown, Co-Founder and COO, Apollonix

A CWEL SUCCESS STORY: EMILY LEVY ’16 Emily Levy entered Babson College as a CWEL Scholar and was an active and involved member of her cohort of Scholars throughout her college career. In her senior year, Emily was accepted to CWEL’s WIN Lab to accelerate a business she founded named PICCPerfect—a socially innovative company which creates functional and fashionable medical dressings. While part of WIN, Emily took top honors in the third annual Beantown Throwdown competition. Also in her senior year, Emily applied to become a finalist in CWEL’s Babson Breakaway Challenge competition. She competed against 400 other exceptional women entrepreneurs, from all industries, and from all over the country. Emily made it to the final round of judging and ultimately took home the $250,000 prize.

As a result of her Babson Breakaway Challenge win, Emily is now working full time on the business she first imagined while a sophomore at Babson, now named Mighty Well™. The team at CWEL was proud to be with Emily every step of the way!

RESEARCH We support groundbreaking research that focuses on the economic value women entrepreneurial leaders bring to the world. Projects from this past year include academic publications, gender research symposia, and applied research reports. Findings inform our larger CWEL mission of demystifying the complexities of gender and driving gender acumen and thought leadership among today’s business leaders. Research increasingly highlights the innate skills that women bring to business leadership and the important impact that women’s entrepreneurship has on communities and markets around the world. – AMANDA ELAM, CWEL RESEARCH DIRECTOR 13 l

CWEL launched a study in 2016 with Oxfam America to examine the role of unconscious bias in the debt-financing process for small business owners in Guatemala, paying particular attention to potential barriers encountered by women and indigenous entrepreneurs. The study tested a forward-thinking methodology that could serve as a useful self-assessment tool for financial-lending organizations. Findings from the report completed in 2017 indicated that the participants perceived very little status discrimination in the lending process based on gender or indigenous status. Instead, these small business owners reported discrimination based on business size, barriers to the collateral, and other loan eligibility requirements, as well as unfavorable interest rates that provided little incentive to seek out debt capital.

GENDER ACUMEN Babson College is a world-renowned hub for entrepreneurial thought leaders, and thanks to the presence of CWEL on its campus since 2000, it’s also recognized as a gender-enlightened business school. CWEL hosts expert speakers, panel events, and campus groups committed to educating the community about gender.

This year, CWEL screened the award-winning

CREATING A GENDER-ENLIGHTENED BUSINESS ECOSYSTEM A SIGNATURE LEARNING EXPERIENCE FOR MBA STUDENTS Gender diversity in organizations has been shown to lead to better decision making, higher innovation levels, greater levels of corporate social responsibility, and increased profit margins. For the second year in a row, in partnership with Babson’s F.W. Olin Graduate School of Business, CWEL led a daylong program for the Two-Year MBA students to explore their roles as future entrepreneurs and leaders in creating a Gender Enlightened Business Ecosystem. During the program, students learned the language and terminology used to discuss issues related to gender diversity, and discussed key statistics highlighting important gender equity gaps. Speakers included Andrew Davis, the Chief Diversity Officer for Coca Cola and James Lopata, Executive Coach with innerOvation. At the end of the day, the students engaged in a Design Challenge to imagine and prototype strategies for creating the Gender-Inclusive organizations of the future.

MICHAEL KIMMEL CWEL was proud to sponsor “Sex, Power & Privilege: A Conversation about Leadership with Michael Kimmel.” Michael Kimmel is one of the world’s leading experts on men and masculinities, and a tireless advocate of engaging men to support gender equality.

Launch and Grow: The Kenyan Women’s

Leadership Program: From Opportunity to Action.

This is a transformational, five-day development

program for women executives moving into roles with

Division. The program is a one-week intensive

course for 15 women entrepreneurs from Kenya,

The program is differentiated by an integrated

followed by continued mentoring for a year to

approach to gender, strengths, and entrepreneurial

assist the entrepreneurs in implementing specific

initiatives aimed at having a social impact in

and vital contributions to their companies’ growth.

“BABSON COLLEGE’S EXECUTIVE WOMEN’S LEADERSHIP PROGRAM IS PHENOMENAL. Every female executive, whether in the C-suite or a rising leader, should consider participating in this program. It features a group of knowledgeable faculty who successfully convey nuanced concepts and facilitate informative group exercises. It is an intense week that leaves participants excited, energized, and invigorated for the business and career challenges ahead!”

“MY MIND IS BLOWN OPEN. I am energized in ways I didn’t think were available to me AND I have tools, resources, and community to support me. For a program to impact mind, heart, and business is something that is really incredible!”

“THE FACULTY WERE PASSIONATE, PERSONABLE, AND KNOWLEDGEABLE. I’m inspired to be an expert in my business, validate my experience, and share lessons with others.” “THERE IS NO OTHER SCHOOL LIKE THIS ONE for an entrepreneur who wants to soar, be the difference, and make the difference.” 18

“To Increase Gender Diversity, We Need to Go Back to School”

“Why Understanding Gender Is an Essential Part of a Business Education”

CWEL BOARD OF ADVISORS CWEL was supported through our very busy 2016-2017 academic year by our dedicated Board of Advisors, led by Director Lisa Spadafora Thompson. »»Isabelle Bushong

Mr. and Mrs. Robert A. Cook

Mr. Douglas A. Garrote-Arango and Mrs. Davila I. Frances

Mr. and Mrs. Howard I. Mirkin

Mr. and Mrs. Samuel A. Peal

PREPARING WOMEN TO LEAD THE WORLD. PREPARING THE WORLD FOR WOMEN LEADERS. 26 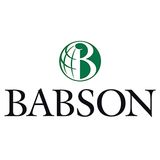