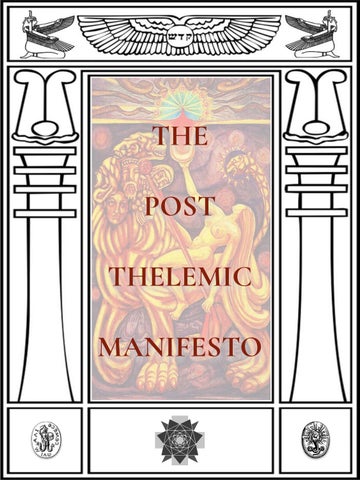 Do what thou wilt shall be the whole of the Law. It has been 117 years since the reception of Liber AL vel Legis by Aleister Crowley, and the beginning of a new Aeon for all of humanity. This is, of course, if we want to believe in the story of the reception of the Book of the Law in Cairo. In recent years, plenty of critiques of it have appeared - some more valid than others. However, we are strongly convinced that magick exists outside the boundaries of time and space, in the liminal space between consensus reality and mythical poiesis. And thus it is largely irrelevant whether the Cairo Account is “true” or “false”: what matters is what it inspired. And there is very little doubt that the 20th Century and the ﬁrst two decades of the 21st Century bore witness to the epochal changes prophesied in AL. We are once again at a crucial and critical juncture of spiritual evolution. This is the moment where we must ﬁnally integrate the lessons of Force &amp; Fire of the Aeon of Horus, and move towards the full opening and establishment of the Aeon of Maat, the Age of Adjustment and of Justice, the Aquarian dream. The idea of the Succession of the Aeons has also been widely criticised in recent times, again to varying degrees of relevance. Whether this idea has ontological validity or not, one cannot deny that it is instrumental to the mythical thinking behind magick.

The Aeon of Horus was ushered in by the Master Therion, in his mortal incarnation as the man Aleister Crowley. He did so by speaking his Word as Magus 9°=2□ A∴A∴ - that Word was θέλημα. We must note that the idea of Thelema as a spiritual Current was not new or original: the man Crowley was indeed a master at ﬁnding old concepts, and adapting them to the world he lived in and the one he envisioned. Yet, by elevating Thelema as an Aeonic Formula, the Master Therion gave it a completely new meaning, along the alchemical power of transmutation. That promise has been fulﬁlled. In the intervening 117 years since its reception, the Formulae of Thelema have forced the soul of humanity through the Force &amp; Fire of the athanor of Horus. It is now time to move beyond. Failure to do so will only bring back the process to a stage of putrefaction and dissolution, and we are already seeing the glimpses of this. From slavish servitude towards the man Crowley, who wasn’t without his ﬂaws, to a desperation to belong to crumbling organisations, Thelemites are scattered to the four winds, dri ing aimlessly as they lose themselves in the grips of Choronzon. &quot;Post CXX annos patebo&quot; was written over the door of the Vault of the Adepts of the Rosicrucian Invisible College - “I will reveal myself in 120 years”. It showed that the time had come for making known the Order to the world.

We are now approaching a new 120th Anniversary, as 2024 e.v. will mark 120 years from the Inauguration of the Aeon of Horus. Between the Vernal Equinox 2021 e.v. and the Vernal Equinox 2024 e.v. we will work tirelessly to establish the world of Post-Thelema. We will not destroy all that has been, and start from zero yet again, but instead we will concentrate on the lessons and teachings of Nuit, Hadit, Ra-Hoor-Kuit, Hoor-Paar-Kraat, Therion, Chaos, Pan, Baphomet, and most of all on the words of Our Lady of the Abyss, Babalon. In doing so, we will free ourselves from the shackles and the unacceptable legacy of the man Aleister Crowley. Fully denouncing his faults, his misogyny, his racism, and leaving behind all the constricting rules and limitations that he laid out. We will deny the authority of any Order whatsoever to establish a canon and an orthodoxy: the Law is for All, and the time for hierarchical organisation is over. These three years, like the phases of the Alchemical journey, will be challenging but ultimately rewarding. It is now time to move beyond.

Love is the law, love under will. Tau Meithras

Do what thou wilt shall be the whole of the Law. A call to arms for those truly willing to evolve Thelema beyond Aleister Crowley. Love is the law, love under will. 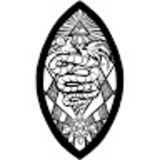