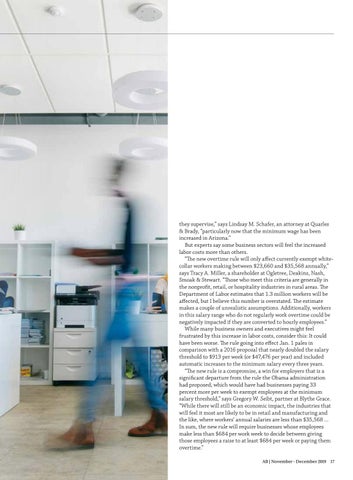 they supervise,” says Lindsay M. Schafer, an attorney at Quarles & Brady, “particularly now that the minimum wage has been increased in Arizona.” But experts say some business sectors will feel the increased labor costs more than others. “The new overtime rule will only affect currently exempt whitecollar workers making between $23,660 and $35,568 annually,” says Tracy A. Miller, a shareholder at Ogletree, Deakins, Nash, Smoak & Stewart. “Those who meet this criteria are generally in the nonprofit, retail, or hospitality industries in rural areas. The Department of Labor estimates that 1.3 million workers will be affected, but I believe this number is overstated. The estimate makes a couple of unrealistic assumptions. Additionally, workers in this salary range who do not regularly work overtime could be negatively impacted if they are converted to hourly employees.” While many business owners and executives might feel frustrated by this increase in labor costs, consider this: It could have been worse. The rule going into effect Jan. 1 pales in comparison with a 2016 proposal that nearly doubled the salary threshold to $913 per week (or $47,476 per year) and included automatic increases to the minimum salary every three years. “The new rule is a compromise, a win for employers that is a significant departure from the rule the Obama administration had proposed, which would have had businesses paying 33 percent more per week to exempt employees at the minimum salary threshold,” says Gregory W. Seibt, partner at Blythe Grace. “While there will still be an economic impact, the industries that will feel it most are likely to be in retail and manufacturing and the like, where workers’ annual salaries are less than $35,568 … In sum, the new rule will require businesses whose employees make less than $684 per work week to decide between giving those employees a raise to at least $684 per week or paying them overtime.” AB | November - December 2019 17