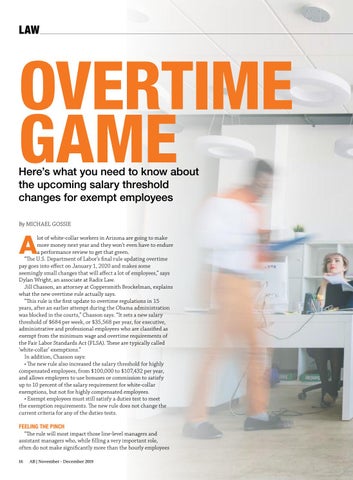 lot of white-collar workers in Arizona are going to make more money next year and they won’t even have to endure a performance review to get that green. “The U.S. Department of Labor’s final rule updating overtime pay goes into effect on January 1, 2020 and makes some seemingly small changes that will affect a lot of employees,” says Dylan Wright, an associate at Radix Law. Jill Chasson, an attorney at Coppersmith Brockelman, explains what the new overtime rule actually says. “This rule is the first update to overtime regulations in 15 years, after an earlier attempt during the Obama administration was blocked in the courts,” Chasson says. “It sets a new salary threshold of $684 per week, or $35,568 per year, for executive, administrative and professional employees who are classified as exempt from the minimum wage and overtime requirements of the Fair Labor Standards Act (FLSA). These are typically called ‘white-collar’ exemptions.” In addition, Chasson says: • The new rule also increased the salary threshold for highly compensated employees, from $100,000 to $107,432 per year, and allows employers to use bonuses or commission to satisfy up to 10 percent of the salary requirement for white-collar exemptions, but not for highly compensated employees. • Exempt employees must still satisfy a duties test to meet the exemption requirements. The new rule does not change the current criteria for any of the duties tests. FEELING THE PINCH “The rule will most impact those line-level managers and assistant managers who, while filling a very important role, often do not make significantly more than the hourly employees 16