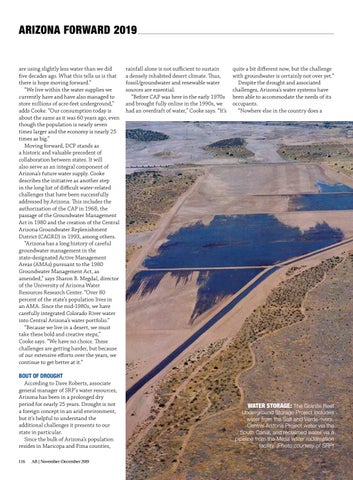 are using slightly less water than we did five decades ago. What this tells us is that there is hope moving forward.” “We live within the water supplies we currently have and have also managed to store millions of acre-feet underground,” adds Cooke. “Our consumption today is about the same as it was 60 years ago, even though the population is nearly seven times larger and the economy is nearly 25 times as big.” Moving forward, DCP stands as a historic and valuable precedent of collaboration between states. It will also serve as an integral component of Arizona’s future water supply. Cooke describes the initiative as another step in the long list of difficult water-related challenges that have been successfully addressed by Arizona. This includes the authorization of the CAP in 1968, the passage of the Groundwater Management Act in 1980 and the creation of the Central Arizona Groundwater Replenishment District (CAGRD) in 1993, among others. “Arizona has a long history of careful groundwater management in the state-designated Active Management Areas (AMAs) pursuant to the 1980 Groundwater Management Act, as amended,” says Sharon B. Megdal, director of the University of Arizona Water Resources Research Center. “Over 80 percent of the state’s population lives in an AMA. Since the mid-1980s, we have carefully integrated Colorado River water into Central Arizona’s water portfolio.” “Because we live in a desert, we must take these bold and creative steps,” Cooke says. “We have no choice. These challenges are getting harder, but because of our extensive efforts over the years, we continue to get better at it.” BOUT OF DROUGHT According to Dave Roberts, associate general manager of SRP’s water resources, Arizona has been in a prolonged dry period for nearly 25 years. Drought is not a foreign concept in an arid environment, but it’s helpful to understand the additional challenges it presents to our state in particular.  Since the bulk of Arizona’s population resides in Maricopa and Pima counties, 116

rainfall alone is not sufficient to sustain a densely inhabited desert climate. Thus, fossil/groundwater and renewable water sources are essential. “Before CAP was here in the early 1970s and brought fully online in the 1990s, we had an overdraft of water,” Cooke says. “It’s

quite a bit different now, but the challenge with groundwater is certainly not over yet.” Despite the drought and associated challenges, Arizona’s water systems have been able to accommodate the needs of its occupants.   “Nowhere else in the country does a

WATER STORAGE: The Granite Reef Underground Storage Project includes water from the Salt and Verde rivers, Central Arizona Project water via the South Canal, and reclaimed water via a pipeline from the Mesa water reclamation facility. (Photo courtesy of SRP)