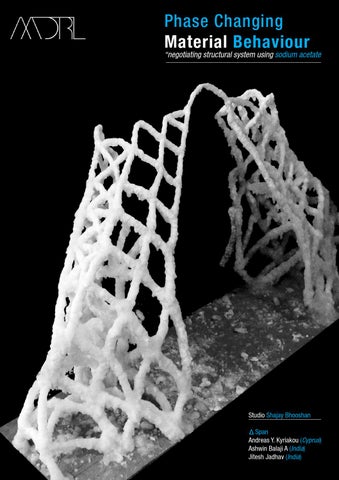 Workshop Brief The brief of the workshop was to build the lightest, strongest bridge which can span one meter using sodium acetate. Studying the material behaviour, complexity, constraints and parameters were the factors to be considered. It included in-depth exploration of the various deposition methods used for depositing sodium acetate. Developing the methods, observing the constraints of the material and designing a truss system which could be used to span a meter long bridge.

Candle wax is an interesting approach to study the deposition method, an addition deposition method which results in creation of interesting geometry and spaces .It gives an overall understanding of the deposition process which included parameters like rate of deposition, studying load distribution, junction and joineries. Different dripping technique created different intuitive spaces and geometry. Water was introduced as an element to increase the deposition speed which helps to harden the wax when you start the dripping process. The number of the dripping agents can be controlled by increasing the number of candle used. Rate of deposition can be controlled by controlling the heat factor. Heat gun proves to be a salient tool to control the heat subjected to the junction.

Addition of wax in the base

Addition of second candle and twisted at the top

Diagram of the process

Adding horizontal elements on either sides

Adding vertical support on either sides

Column with broader base

Diagram of the process

To make a successful model, the solution is the key. Sodium acetate and water should be in right proportion and should be heated and cooled well. Since the solution is prone to crystallize easily due to factors like dirt in the syringe or in the cup or disproportionate ratio of sodium acetate and water. Its important to seal the cup and sterilize the syringe before starting to use.

How to prepare sodium acetate solution 1

add water after 10 mins of boiling

transfer the solution to a wrapped container

cool in either fridge or room temp for 90 mins

When studying about the behaviour of the material, the main observation noted was that the material reflects its strength depending upon various parameters like the amount of water added when preparing the solution, the amount of the time is has been cooled and the crystallinity of the material itself. The solution is prepared by adding 25 ml water in 100 gm of sodium acetate ideally. The mixture is heated for some amount of time until it turns into complete liquid and allowed to cool in the fridge for around 90 mins. The solution thus prepared is pumped into a syringe and used for deposition when dropped from a syringe it changes its phase from liquid to solid. Scenario 1 When proper proportion of sodium acetate and proper amount of water is added. The solution thus obtained is quite sturdy, strong and is proper white is colour when deposited. Scenario 2 When the proportion of water is excess while preparing the solution. The deposition content got after deposition is quite limpid in its state and can be felt a little soft when exerted pressure on it. Scenario 3 When the proportion of water is less in the solution then the solution will get crystalline in the container itself when taking into the syringe.

Deposition is the integral part of the system. Addition deposition method was used to design the structure and the geometry. The most critical problem observed during the deposition process was crystallization. The sodium acetate solution was being pumped into a syringe which is preheated in warm water so as the solution in the container doesnâ&#x20AC;&#x2122;t get crystallized. Material deposition was done using syringes of various thickness which included 50ml, 20ml and 10 ml. A needle was attached in the syringe to get more control over the thickness and the deposition method. Minute strands were formed using a needle attached to a smaller syringe so as to get more precision and light weight pieces. Various levels of thickness was used in the deposition process so as to generate proper load distribution in the system. The base having the thickest members and reducing the thickness as moving towards the centre.

Stick model was used as a diagrammatic method for studying the structural frames. Different binding agents were used in the process like clay, glue and sodium acetate. The stick model study was vital before proceeding to use sodium acetate material. It was helpful in conceiving the geometry and the process was mostly intuitive by adding the sticks when and where needed. Sodium acetate was the protagonist of the entire workshop. Initial attempts of sodium acetate models gave more understanding of the material behaviour than constructing a particular geometry / form. Since the initial attempts were vertical in nature, the next stage was to develop few strategies to build it horizontally. Finally the idea of bridging was achieved by tilting the column at a certain angle and extruding the face of it. Sodium acetate model exploration was helpful for final design as few components like base were taken from the initial attempts.

Attempt to bridge the column structure

Plan of the model

Elevation of the model

Base similar to the previous model experimentation

Diagrams of the construction process

Base similar to the previous model experimentation

Diagrams of the construction process

Hexagonal Base Cantilever bridge experiment was done with a hexagonal base with six major supporting framework where the load is equally distributed from top to bottom.

Diagram of the structure

The left part of the bridge failed because of the wrong inclination.

0.9 meter span structure using cross-bracing Various method of material deposition were being implemented. It was observed that when material is deposited in a vertical stream it has a tendency to twist after certain height and has a tendency to break. It works best when the material is being deposited in certain angles. The angle of inclination, thickness of the memberâ&#x20AC;&#x2122;s and the rules considered for constructing the geometry were some of the predominant factors considered. Different level of thickness were used for different areas of the geometry. The thickness kept on reducing as it moved to the center of the geometry with a understanding of base being the thickest and strongest, while reducing the load on the structure by reducing the thickness of the member as you move towards the center of it. The main components of the geometry were the base,spine,cross bracing and mesh pattern which was supported by cross bracing. The base had the thickest memberâ&#x20AC;&#x2122;s so as to take the load which is subjected to it.It had six touch points on the ground to support the configuration above. Deposition was done at certain angles so as to form stronger nodes which could take the weight of the profile. Diagonal members were provided to support the profile of the base. The spine was the main membrane which held the whole configuration together. The surface pattern created were connected to the spine transferring the load to the base. A tessellation pattern was formatted creating nodes junction at various levels. Various angle of inclination were used for the mesh pattern developed. Tests were performed to derive the angle of inclination to create the profile above. The angle of inclination was showed superior result was 70 degree inclination. Cross bracing supported the spine and the tessellation pattern formed it transferred the load to the base. The idea of bracing back into the structure as you go higher was an interesting idea derived.

nParticle exploration (via Autodesk Maya) was done to explore on the different possible deposition methods digitally. By creating emitters of different numbers, sizes, angles and paths, deposition method was simulated. The catalogue comprises of series of the same family by setting up emitters with the use of gravity and paths without gravity. 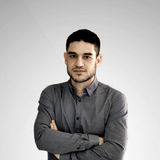 The brief of the workshop was to build the lightest, strongest bridge which can span one meter using sodium acetate. Studying the material b...

The brief of the workshop was to build the lightest, strongest bridge which can span one meter using sodium acetate. Studying the material b...