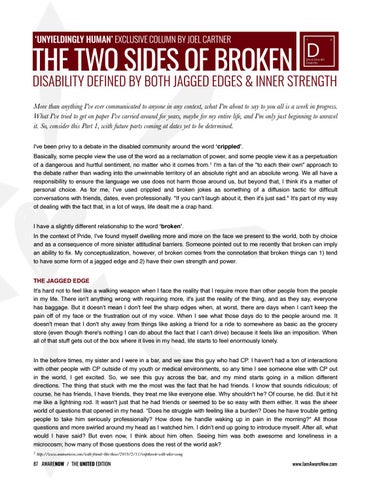 THE TWO SIDES OF BROKEN

DISABILITY DEFINED BY BOTH JAGGED EDGES &amp; INNER STRENGTH More than anything I&#39;ve ever communicated to anyone in any context, what I&#39;m about to say to you all is a work in progress. What I&#39;ve tried to get on paper I&#39;ve carried around for years, maybe for my entire life, and I&#39;m only just beginning to unravel it. So, consider this Part 1, with future parts coming at dates yet to be determined.

I&#39;ve been privy to a debate in the disabled community around the word ‘crippled’.

Basically, some people view the use of the word as a reclamation of power, and some people view it as a perpetuation of a dangerous and hurtful sentiment, no matter who it comes from.1 I&#39;m a fan of the &quot;to each their own&quot; approach to the debate rather than wading into the unwinnable territory of an absolute right and an absolute wrong. We all have a responsibility to ensure the language we use does not harm those around us, but beyond that, I think it&#39;s a matter of personal choice. As for me, I&#39;ve used crippled and broken jokes as something of a diffusion tactic for difficult conversations with friends, dates, even professionally. &quot;If you can&#39;t laugh about it, then it&#39;s just sad.&quot; It&#39;s part of my way of dealing with the fact that, in a lot of ways, life dealt me a crap hand.

I have a slightly different relationship to the word ‘broken’.

In the context of Pride, I&#39;ve found myself dwelling more and more on the face we present to the world, both by choice and as a consequence of more sinister attitudinal barriers. Someone pointed out to me recently that broken can imply an ability to fix. My conceptualization, however, of broken comes from the connotation that broken things can 1) tend to have some form of a jagged edge and 2) have their own strength and power.

It&#39;s hard not to feel like a walking weapon when I face the reality that I require more than other people from the people in my life. There isn&#39;t anything wrong with requiring more, it&#39;s just the reality of the thing, and as they say, everyone has baggage. But it doesn&#39;t mean I don&#39;t feel the sharp edges when, at worst, there are days when I can&#39;t keep the pain off of my face or the frustration out of my voice. When I see what those days do to the people around me. It doesn&#39;t mean that I don&#39;t shy away from things like asking a friend for a ride to somewhere as basic as the grocery store (even though there&#39;s nothing I can do about the fact that I can&#39;t drive) because it feels like an imposition. When all of that stuff gets out of the box where it lives in my head, life starts to feel enormously lonely.

In the before times, my sister and I were in a bar, and we saw this guy who had CP. I haven&#39;t had a ton of interactions with other people with CP outside of my youth or medical environments, so any time I see someone else with CP out in the world, I get excited. So, we see this guy across the bar, and my mind starts going in a million different directions. The thing that stuck with me the most was the fact that he had friends. I know that sounds ridiculous; of course, he has friends, I have friends, they treat me like everyone else. Why shouldn&#39;t he? Of course, he did. But it hit me like a lightning rod. It wasn&#39;t just that he had friends or seemed to be so easy with them either. It was the sheer world of questions that opened in my head. “Does he struggle with feeling like a burden? Does he have trouble getting people to take him seriously professionally? How does he handle waking up in pain in the morning?&quot; All those questions and more swirled around my head as I watched him. I didn&#39;t end up going to introduce myself. After all, what would I have said? But even now, I think about him often. Seeing him was both awesome and loneliness in a microcosm; how many of those questions does the rest of the world ask?