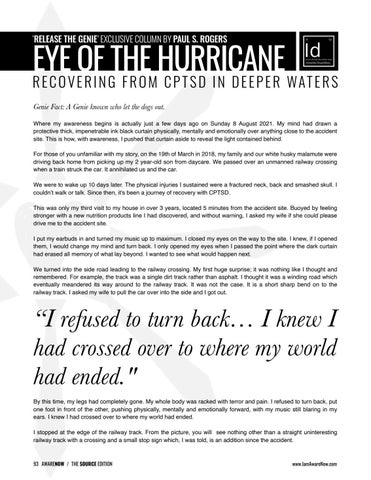 EYE OF THE HURRICANE

Where my awareness begins is actually just a few days ago on Sunday 8 August 2021. My mind had drawn a protective thick, impenetrable ink black curtain physically, mentally and emotionally over anything close to the accident site. This is how, with awareness, I pushed that curtain aside to reveal the light contained behind.

For those of you unfamiliar with my story, on the 19th of March in 2018, my family and our white husky malamute were driving back home from picking up my 2 year-old son from daycare. We passed over an unmanned railway crossing when a train struck the car. It annihilated us and the car.

We were to wake up 10 days later. The physical injuries I sustained were a fractured neck, back and smashed skull. I couldn’t walk or talk. Since then, it&#39;s been a journey of recovery with CPTSD.

This was only my third visit to my house in over 3 years, located 5 minutes from the accident site. Buoyed by feeling stronger with a new nutrition products line I had discovered, and without warning, I asked my wife if she could please drive me to the accident site.

I put my earbuds in and turned my music up to maximum. I closed my eyes on the way to the site. I knew, if I opened them, I would change my mind and turn back. I only opened my eyes when I passed the point where the dark curtain had erased all memory of what lay beyond. I wanted to see what would happen next.

“I refused to turn back… I knew I had crossed over to where my world had ended.&quot;

By this time, my legs had completely gone. My whole body was racked with terror and pain. I refused to turn back, put one foot in front of the other, pushing physically, mentally and emotionally forward, with my music still blaring in my ears. I knew I had crossed over to where my world had ended.

I stopped at the edge of the railway track. From the picture, you will see nothing other than a straight uninteresting railway track with a crossing and a small stop sign which, I was told, is an addition since the accident.