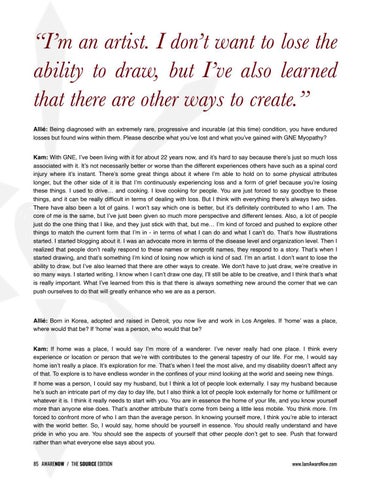 “I’m an artist. I don’t want to lose the ability to draw, but I’ve also learned that there are other ways to create.”

Allié: Being diagnosed with an extremely rare, progressive and incurable (at this time) condition, you have endured losses but found wins within them. Please describe what you’ve lost and what you’ve gained with GNE Myopathy?

Kam: With GNE, I’ve been living with it for about 22 years now, and it’s hard to say because there’s just so much loss associated with it. It’s not necessarily better or worse than the different experiences others have such as a spinal cord injury where it’s instant. There’s some great things about it where I’m able to hold on to some physical attributes longer, but the other side of it is that I’m continuously experiencing loss and a form of grief because you’re losing these things. I used to drive… and cooking. I love cooking for people. You are just forced to say goodbye to these things, and it can be really difficult in terms of dealing with loss. But I think with everything there’s always two sides. There have also been a lot of gains. I won’t say which one is better, but it’s definitely contributed to who I am. The core of me is the same, but I’ve just been given so much more perspective and different lenses. Also, a lot of people just do the one thing that I like, and they just stick with that, but me… I’m kind of forced and pushed to explore other things to match the current form that I’m in - in terms of what I can do and what I can’t do. That’s how illustrations started. I started blogging about it. I was an advocate more in terms of the disease level and organization level. Then I realized that people don’t really respond to these names or nonprofit names, they respond to a story. That’s when I started drawing, and that’s something I’m kind of losing now which is kind of sad. I’m an artist. I don’t want to lose the ability to draw, but I’ve also learned that there are other ways to create. We don&#39;t have to just draw, we’re creative in so many ways. I started writing. I know when I can’t draw one day, I’ll still be able to be creative, and I think that’s what is really important. What I’ve learned from this is that there is always something new around the corner that we can push ourselves to do that will greatly enhance who we are as a person.

Kam: If home was a place, I would say I’m more of a wanderer. I’ve never really had one place. I think every experience or location or person that we’re with contributes to the general tapestry of our life. For me, I would say home isn’t really a place. It’s exploration for me. That’s when I feel the most alive, and my disability doesn’t affect any of that. To explore is to have endless wonder in the confines of your mind looking at the world and seeing new things.

If home was a person, I could say my husband, but I think a lot of people look externally. I say my husband because he’s such an intricate part of my day to day life, but I also think a lot of people look externally for home or fulfillment or whatever it is. I think it really needs to start with you. You are in essence the home of your life, and you know yourself more than anyone else does. That’s another attribute that’s come from being a little less mobile. You think more. I’m forced to confront more of who I am than the average person. In knowing yourself more, I think you’re able to interact with the world better. So, I would say, home should be yourself in essence. You should really understand and have pride in who you are. You should see the aspects of yourself that other people don’t get to see. Push that forward rather than what everyone else says about you. 85 AWARENOW / THE SOURCE EDITION